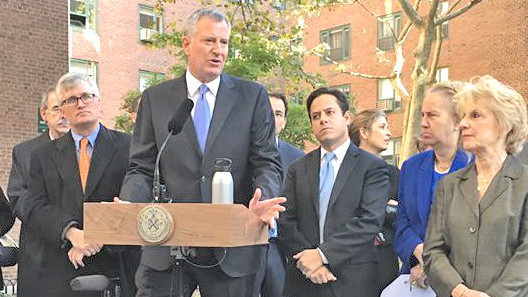 The units will be leased at rents ranging from $1,500 to $3,200 for a two bedroom, depending on income, as part of the cityʼs deal to sell the 11,000-unit East Side apartment complex to Blackstone last year for $5.45 billion.

Blackstone received around $225 million in tax breaks and a loan that doesn’t have to be repaid to the city for agreeing to preserve affordability for 20 years. The deal was hailed as “the mother of all preservation deals” by Mayor Bill de Blasio, when the sale to the Blackstone Group and Ivanhoe Cambridge was announced.

Under the agreement, 90 percent of the 5,000 preserved units will be made available to residents earning no more than 165 percent of area median income (AMI.)

The city has said within the eligible income ranges, none of the new tenants will pay more than 30 percent of their incomes in rent.

The lottery will run from March 1 to 31 and will accept a maximum of 15,000 names of applicants who will be put onto a waiting list. The process will be repeated every two years and prospective tenants will have to reapply.

The process does not give any preference to existing tenants of Stuyvesant Town-Peter Cooper Village. Instead, the only preference given will to be to applicants who currently live in the five boroughs, with their applications being reviewed first.

In a letter to tenants, Stuyvesant Town general manager Rick Hayduk said, “Today, Peter Cooper Village-Stuyvesant Town launched the affordable housing program that was announced in October, 2015 as part of the sale. This program will ensure that 5,000 of PCVST’s units remain affordable to moderate and middle income New Yorkers. We are proud of this program and are grateful to the City of New York and New York City Housing Development Corporation for their partnerships in putting this together.”

A few market rate units advertised on the property’s website this week include a one-bedroom in Stuy Town for $3,232. A 440-square foot studio in Peter Cooper is listed as being available for $3,159-$3,199. A two-bedroom in Peter Cooper can get as high as close to $6,000. Add in a pressurized wall to create an extra room in any unit and rents are boosted by a few hundred dollars.

As for the preservation deal brokered last fall, Garodnick called it historic.
“It’s the largest in the city’s history and we’re pretty proud of the result,” he said. “This is the first step towards preserving our neighborhood as a middle class haven for the next generation.”