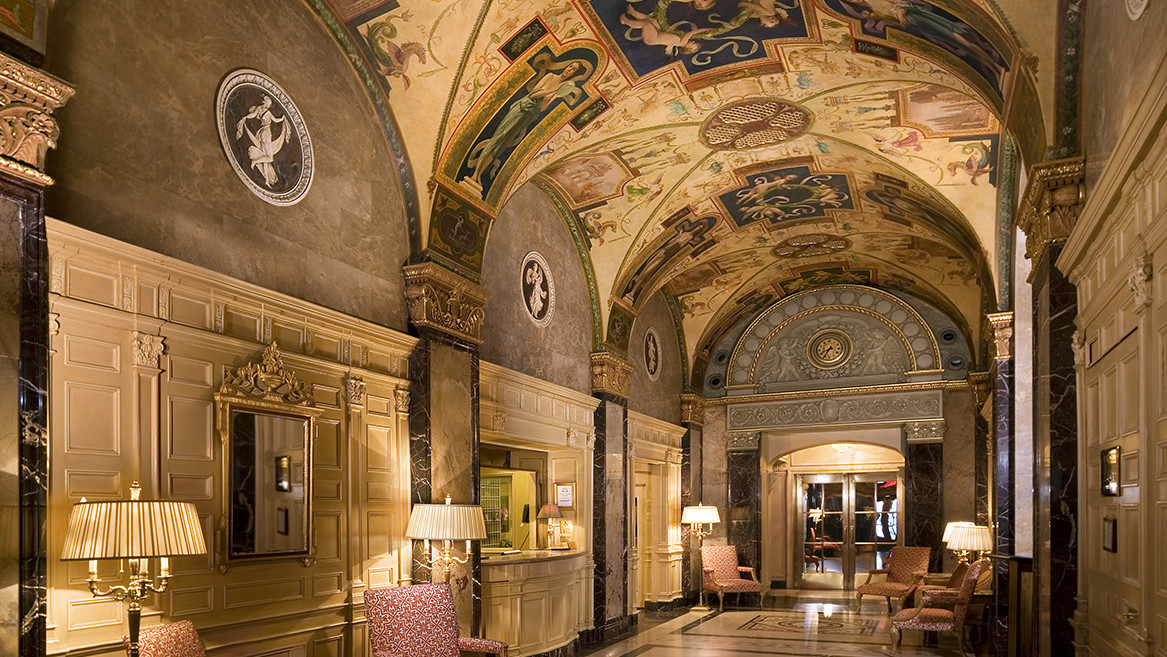 From the marble halls of the Chrysler and Empire State Buildings to the sleek Mid-Century spaces of the Seagram Building to the eye-catching entries of the current crop of signature addresses, New York has always excelled at lobby design.

But now as the city continues a near-unprecedented era of upgrading its office, retail and housing stock, canny developers and designers face the challenge of making old spaces new again.

It’s not a minute too soon, according to Douglas Elliman Realtor Vickey Barron. “I feel sometimes that I should be on a citywide lobby taskforce,” she says.

“To me, in the suburbs, you have curb appeal. In Manhattan you have lobby appeal – people are immediately faced with the sensibility of the entire building. There are a lot of 1970s lobby conversions that did the buildings no favor and I have had prospective buyers walk in and walk out because of a lobby.”

“There was the sense that the lobby was a bit tired and we wanted to refresh the space,” says RM’s Vice Chairman & President Eric Rudin. “But we also needed two different desks, one to serve the Merchandise Mart’s showrooms and the other for our commercial tenants. You want to address your visitors visually and give them both an equal presence in the building.”

Architect Roger Duffy of Skidmore, Owings & Merrill has conceived of a treatment that echoes the existing architecture at 41 Madison while providing a more welcoming presence on the street. “We’ve respected the classic Miesian style, but increased height and added features such a luminous ceiling that will be visible from Madison Square,” he says. “The travertine elevator cores will be retained and the new features will play off Emery Roth’s original design.”

A few blocks away, Brian Feil of the Feil Organization has been overseeing a lobby restoration at 261 Fifth Avenue, an Art Deco masterwork by architect Ely Jacques Kahn. “The exterior of the building above the retail is designated Landmark

status,” Feil notes. “We wanted to restore the retail façade to go with the entire scheme of the property. In the lobby itself the gold leaf ceiling was turning green and we wanted to relocate the security to front to help with traffic as well as change the entry revolving doors, which don’t suit the architecture. Basically we want to restore and enhance.”

North on Fifth Avenue at the Sherry-Netherland, a lobby restoration uncovered and recreated spectacular murals based on Italian Renaissance art. “The Sherry-Netherland commissioned artist Joseph Aruta to paint a ceiling mural in the hotel lobby, basing it on Raphael’s frescoes at the Vatican Palace in Rome,” said Michael J. Ullman, the Sherry-Netherland’s Executive Vice President & Chief Operating Officer.

“Some years ago, a small section of the lobby ceiling was restored. One of our shareholders saw how beautiful it was and wanted to do the whole ceiling. So we asked the other shareholders to participate in the funding.”

With little original detail to be uncovered, the goal became, in Wong’s words, “to be contextual without being literal and boring.”

Working with Cetra Ruddy, Wong designed the lobby at Walker Tower and transformed it from what was essentially an outdated office entrance into a series of glamorous spaces.

“One of the challenges was how to interpret the architectural vocabulary developed by Ralph Walker into something that is new and modern and yet respectful of the past,” Wong says.

Cetra agrees that the renovation of a non-residential building into a residential one can mean re-imagining the building from the inside out. “When we designed the lobby for Walker Tower, we wanted the lobby to provide the resident with all they desired. But its aesthetic was also grounded in the style of the building itself. There was little to go on within the old lobby space, but there were a few details which inspired us, such as the ornamental ironwork in the grillwork above the entry doors, and the amazingly baroque plan of the entry vestibule.”

Different buildings mean different challenges to face. For Feil, the biggest problem was “doing lobby and elevator and window replacement while the building is 100% occupied.”

Duffy, working on 41 Madison, found the original lobby to be unexpectedly drafty, given the high traffic. “But the real challenge was in giving both sets of tenants equal access and respecting their identities.”

Ullman’s team at the Sherry-Netherland faced a unique problem: “Once they uncovered the ceiling, it was found that two sections of the mural were missing as the ceiling had, at one point, completely collapsed. There was no guidance at all to know what those sections looked like so the lead artist Kumi Ko, from Evergreene, replicated sections based on the rest of the ceiling.”

“Proper functionality and flow are the two most challenging elements we face,” Cetra says of both new and renovated builds.

“It depends on the program of the building,” he says. “As lobbies merge with retail you see bigger plate glass at the street level and more of an attempt to capture the street. In effect you’re seeing the lobby as you approach the building.”

It’s a point that Rudin and Duffy both stress will be part of the program at 41 Madison. “A chance to really make the building work from a distance,” Rudin says.

Duffy notes that there is a trend currently “to go super-white” with minimal detailing and overly-bright lighting but that he feels he has avoided this at 41 Madison.

“Newer buildings are more ‘right-sized’ than over-the-top,” he says. “Compare Rockefeller Center with Tower One at the World Trade Center. The latter is gracious and elegant but also directed towards practical concerns.”

Cetra sees an organic weaving of old and new as another increasing trend, citing his firm’s recent work at 443 Greenwich Street, where “the lobby incorporates both a beautifully landscaped courtyard, and original details of the building. The wood coffering in the ceiling was fabricated from old floor beams taken out of the building itself.”

There’s across-the-board agreement that the lobby is an absolutely crucial component of the tenant and visitor experience. “Aesthetics matter,” Rudin says. “Possibly more on a subliminal level for some people, but it’s always better to walk into a beautiful space.”

Cetra points out that “Lobbies are very important spaces, in that they need to provide the residents with that sense of security and sanctuary, but they also need to impress the future residents. It is the second thing you experience when you go to a building – the first being the building itself. So its design should be targeted to the prospective resident or tenant. It should reflect their values and aspirations…and it should be beautiful.”

According to Ullman, the results of the Sherry-Netherland’s restoration have been a coup from every standpoint. “It has been fantastic,” he says.

“People come in just to see our ceiling. Our residents and our guests are thrilled when they come in. It has changed the entire atmosphere of the lobby and of the building, which was the intent of this shareholder from the start.”

Silverstein Properties tops out at 3 WTC