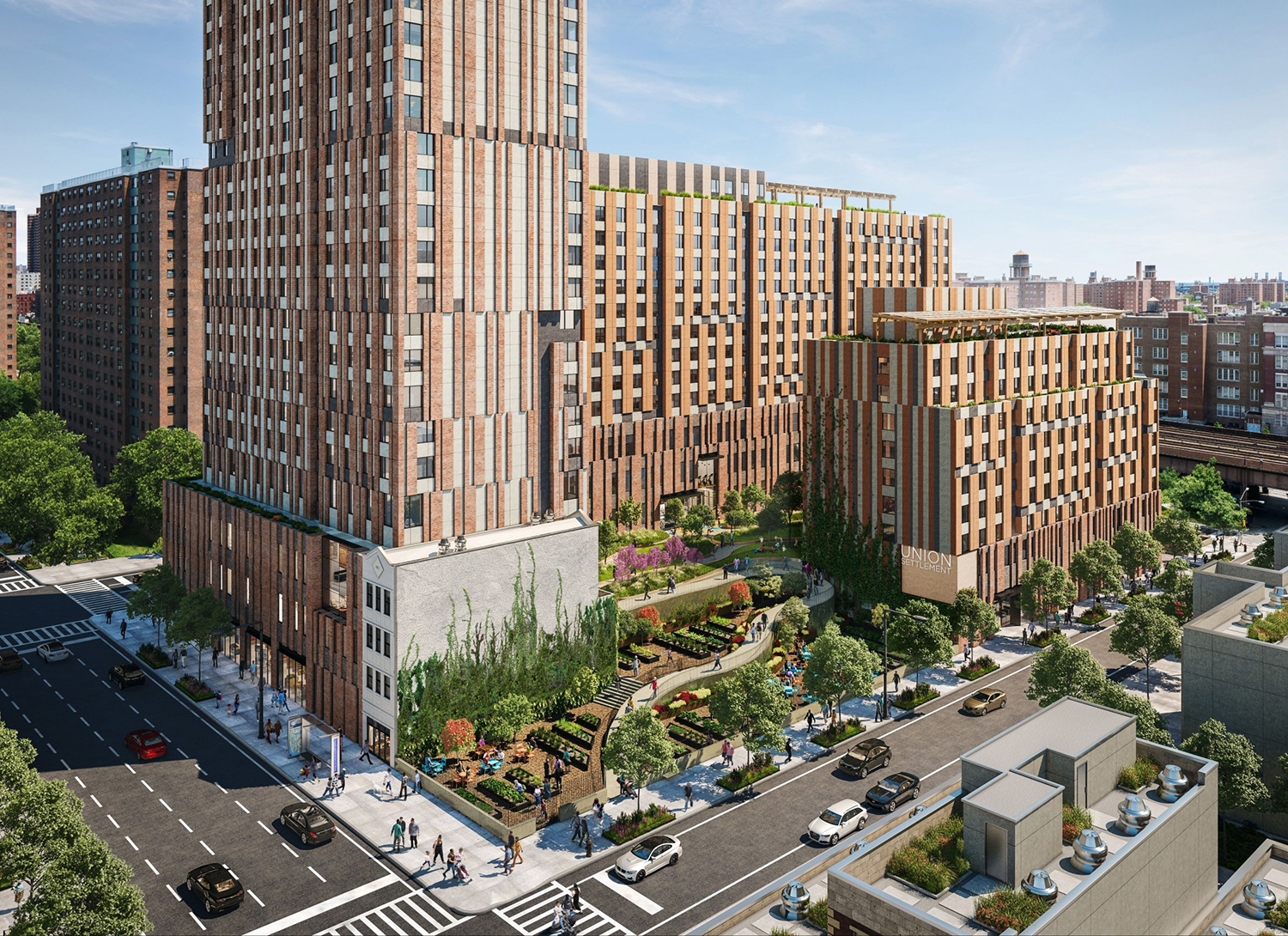 It will give the job of building and renovating 3,200 affordable apartments in Harlem, East New York and the Bronx to more of the people who live there and pay them $40 per hour, along with healthcare and retirement benefits.

“With this agreement, we’re setting a new precedent for how to build permanently affordable housing with union labor, hire locally and create more pathways to the middle class in low-income communities of color,” said Mike Prohaska, business manager of Laborers’ Local 79.

The hiring pact is the first major deal that Laborers’ Local 79 has done directly with an affordable housing developer and, according to L+M CEO Ron Moelis, sets a new standard for moving forward.

“I’m hopeful it will provide a broader model for how builders and labor can work together to create much-needed affordable housing in every corner of the city as we work to recover from the pandemic,” said Moelis.

The partnership’s first projects include the 361-unit Sendero Verde (rendering top) a 100 percent affordable project in East Harlem that L+M is developing in partnership with Jonathan Rose Companies and Acacia Network. That project topped out last week.

It will also include the 542-unit first phase of Bronx Point in the South Bronx that L+M is developing with Type A Projects and will include the new Universal Hip Hop Museum and a riverfront park.

And it will cover rehabilitation projects at two New York City Housing Authority (NYCHA) sites: Linden Houses in East New York, Brooklyn and Harlem River Houses I & II in Harlem, both of which are expected to begin construction in 2021. L+M is partnering with Douglaston Development, Dantes Partners and SMJ Partners on the Linden Houses project, and is serving as contractor for Settlement Housing Fund and West Harlem Group Assistance’s rehab of Harlem River Houses I & II.

Sendero Verde phase one includes 361 apartments, a new public charter school and a 12,000 s/f community center for youth and seniors operated by Union Settlement. Upon completion of its second phase, the 700-apartment project will be the largest residential passive housing development in the country.

In January, construction is expected to begin on the 542-unit first phase of Bronx Point, a 100 percent permanently affordable project in the South Bronx that L+M is developing with Type A Projects and will include the new Universal Hip Hop Museum and a riverfront park.

In addition to local hiring requirements, the agreement also specifically requires hiring NYCHA residents living in complexes near projects built through the partnership.

Local 79 has a history of local hiring and has worked with a variety of contractors and developers to make projects financially feasible while creating union construction jobs for local residents, including many women, people of color, and formerly incarcerated New Yorkers.

Arlene Sano Henry, a resident of Grant Houses, a NYCHA development in Harlem, and Local 79 member, said working in union construction has completely transformed her life. “This new agreement between L+M Development and Local 79 is a game-changer for the future of development in the city,” she said. “New affordable housing projects and renovation projects at NYCHA buildings should create more union jobs for local residents.”

Raul Russi, president and CEO of Acacia Network, a Latino-founded organization with deep roots in New York, added, “Acacia Network has remained steadfast in our commitment to advancing health, equity, and opportunity for individuals and families in the communities we serve.

“We are proud that Sendero Verde is part of this initiative to ensure local hiring through a partnership with Local 79, which will provide much-needed employment opportunities to hardworking folks from some of the communities hardest hit by the COVID-19 pandemic.”

Project labor agreements, or PLAs, aren’t new to the state, although this is the first time a union has reached a deal with a single private developer.

Over the summer, Mayor Bill de Blasio announced a Community Hiring economic justice plan, which included new Project Labor Agreements with the building trades unions and a push for legislation in Albany to drive economic recovery in economically disadvantaged communities by using the city’s purchasing power to connect New Yorkers to good jobs.

As part of that agreement Unions must prioritize the referral of workers from zip codes where at least 15 percent of the population lives below the federal poverty level and/or are NYCHA residents, aiming to reach an overall goal that at least 30 percent of all hours worked under PLA projects are logged by workers from these zip codes.

Unions must also provide contractors with apprentices on City construction projects up to the maximum number allowed by the New York State Department of Labor when contractors request apprentices. An apprenticeship Memorandum of Understanding establishes, for the first time, specific annual goals for the number of slots provided for both apprentices and pre-apprentices for residents of disadvantaged communities and NYCHA housing.