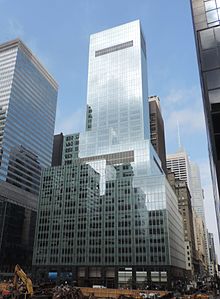 JLL has completed a new transaction at 330 Madison Avenue with building owner Munich Re Group.

JLL, was represented in-house by Peter Riguardi, chairman and president of the New York tri-state region.

“JLL’s success in New York has increased our need for quality talent, and we continue to grow and expand to attract and retain the best in the industry,” said Riguardi.

“330 Madison has been an excellent location for us. Our ability to expand in the building and redesign our space will give us the ability to continue to efficiently grow and increase our operations here.” JLL signed a 10-year lease for 150,000 s/f of space and will occupy a portion of the second floor, the entire third, fourth and fifth floors, and a portion of the sixth floor at 330 Madison Avenue, which is located between East 42nd and East 43rd streets.

The real estate services firm is substantially expanding its footprint, having occupied 82,000 s/f at the building since early 2011. The 39-story 330 Madison Avenue was designed by Ely Jacques Kahn, one of the fathers of the New York City skyline, and constructed in 1963.

The building was renovated in 2012, including a new glass curtainwall façade, lobby, and updated systems.