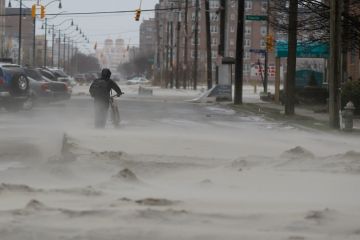 Hurricane season promises to keep the pain piling on

A global pandemic, unthinkable lockdowns and unimaginable economic impact has made 2020 an infamous year so far, and there is more on the horizon.

Since 2017, hurricanes have cause nearly $315 billion in damage in the US alone. The 2020 Atlantic hurricane season that began June 1 and runs through November 30, is forecast to be above normal with 16 named tropical storms, eight of which will become hurricanes.  This compared to the average Atlantic season of 12 named storms, six of which become hurricanes.

Experts forecast 13 to 16 named tropical storms, five to eight that will become hurricanes and approximately three could landfall in Mexico.

The Atlantic hurricane season is already one for the record books and it’s only getting started. With an early to the season, a record number of named storms, and a storm reaching states that don’t normally see tropical systems, this season is off to a fast and interesting start. Before the season officially began, we already had two named storms: Arthur and Bertha, which is impressive in and of itself.

Then we added Cristobal, the third named storm of the season, and that pushed us into the record books, setting a record for the earliest third named storm formation date on record, breaking the old record set in 2016, according to researchers.

Even more concerning: All three of those storms had a direct impact on the US. The latter two made direct landfall on US soil, Bertha in South Carolina and Cristobal in Louisiana.

According to forecasters, four of the eight Atlantic hurricanes for 2020 can become major hurricanes – Category 3 or higher, with over a 95 percent chance of one making landfall in the US.

Urbanization and population growth of cities built over wetlands and/or floodplains are areas of increased vulnerabilities.

The 2005 Hurricane Katrina, a Category 5 hurricane caused estimated economic and property damage of over $125 billion, particularly in New Orleans, a city founded on a high land bend of the Mississippi River.  However, urbanization pushed settlements onto drained wetlands, which over decades have caused soils to subside increasing the city’s vulnerability to storm surge and flooding.

The 2017 Hurricane Harvey caused over $120 billion in economic impact as it flooded Houston following days of intense rain reaching as high as 40 inches.  Hurricanes Katrina and Harvey are the top two costliest storms in US history.

Assuming Andrew’s original track, the financial impact in South Florida today could exceed $100 billion, but if landfall is just 20 miles north from Fender Point-FL, the eye of the storm will be directly over Miami that can result in economic damages of as much as $300 billion.

Resiliency to flood risk and wind damage should continue to be the top priorities for governments and private sector.

Although, cities like Miami, New Orleans, and Houston have improved their flood protection systems, increase vulnerabilities are still at large due to social-economic disparities.  Building codes have significantly improved the minimum design requirements of building envelope components such as walls, windows and roofing, and non-structural components such as rooftop equipment, canopies, among others.

FEMA has continued updating their flood hazard maps to assist designers, owners and the public to better understand flood risk.

In addition to the COVID crisis and its current socio-economic impact, property owners must prepare for what could be compounding disasters in the face of the pending hurricane season.

Clearly, there is a need to improve the resilience of our built environment to minimize the effects of major storms and to enable the speedy recovery of businesses and the community.

Although, buildings over 20 years old are more vulnerable to wind damage than those built under current building codes, consider upgrades when regularly scheduled maintenance, repairs and capital improvements are made. For example, when replacing the roof, consider upgrading to a hurricane-rated roof membrane assembly.

Similarly, if replacing the windows and/or doors, consider upgrading to hurricane-rated impact-resistant assemblies.  Develop and practice a hurricane preparedness plan that includes removing loose objects from the roof and site, securing openings and protecting windows and doors where possible.

Nicolas Saenz is Associate principal and a leader in Thornton Tomasetti’s Forensics practice, specializing in forensic and damage assessment projects.