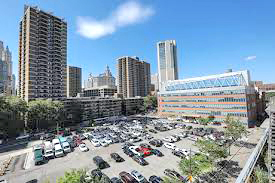 Howard Hughes promises to clean up its act

The Howard Hughes Corporation has vowed to be a good neighbor and pull out all the stops to clean up its cleanup plans for a contaminated brownfield South Street Seaport site.

“As longtime members of the Seaport community, we are committed to the safety and well-being of our neighbors, and appreciate feedback from our elected officials,” said a spokesman for the company.

“We are continuing to work closely with the State Department of Environmental Conservation and Department of Health, as well as a wide array of local stakeholders to ensure the development of a safe, thorough and rigorous investigation plan that prioritizes the safety and security of the surrounding community.

“We are also pleased to provide neighborhood stakeholder groups with support for an independent environmental consultant they have selected to advise them on the best way to clean up the site.“

The comments came after a group of environmentally minded politicians wrote to the Department of Environmental Conservation citing major safety concerns surrounding a Brownfield Cleanup Program at 250 Water Street in the South Seaport Historic District.

Howard Hughes bought the one-acre site from Peck Slip Associates, an entity controlled by the Milstein family for $182 million in 2018.

Site of a one-time glue factory, chemical plant and mercury warehouse, the land is contaminated with a slew of toxic pollutants.

The Milstein family had faced several challenges in its attempts to develop the site, including community opposition, downzoning and litigation.

Howard Hughes purchased the parking lot seeking tax credits for the project of restoring the site via the Brownfield Cleanup Program redevelopment tax credit while also aiding in the city-wide agenda to provide more affordable housing.

According to the DEC spokesperson 176 similarly polluted sites have received Certificate of Completions under the New York State’s Brownfield Cleanup Program. Of those, 34 were in Manhattan and 11 of these allow for unrestricted use of the property.

Through the Brownfield Cleanup Program (BCP), and under DEC oversight, the developer must conduct an investigation to determine the nature and extent of contamination at the site and form a cleanup plan that is fully protective of public health and the environment.

In their letter to the DEC, the politicians say the Howard Hughes plan falls short.

“The existing work plan to clean up 250 Water Street is insufficient and inadequate, threatening the safety and well-being of thousands of children, senior citizens and the whole Seaport community,” said Comptroller Scott Stringer.

Assemblymember Niou added, “We must be proactive in preventing any danger from the site affecting our residents during the investigation phase and beyond. I have been fighting beside our community since we first found out about the proposal and will continue to fight beside our community through an active task force formed of community stakeholders and other elected officials.”

Currently, the site remains a parking lot with a black top which covers the mercury, lead and petroleum embedded grounds below the site.

Howard Hughes’s presence in the neighborhood is vast. The company completed the development of Pier 17 this past summer in the Seaport District. Opening in June, the location features a 1.5-acre rooftop, waterfront restaurants and live broadcasting studios from ESPN.

The future of the 250 Water Street project will come down to an approval of the work plan. The DEC said it is currently reviewing the comments received and will revise the plan as necessary.

“It is anticipated that the field work would begin later this winter and continue into spring. DEC is committed to keeping the public engaged and informed throughout the investigation and cleanup of the site,” said a spokesman.