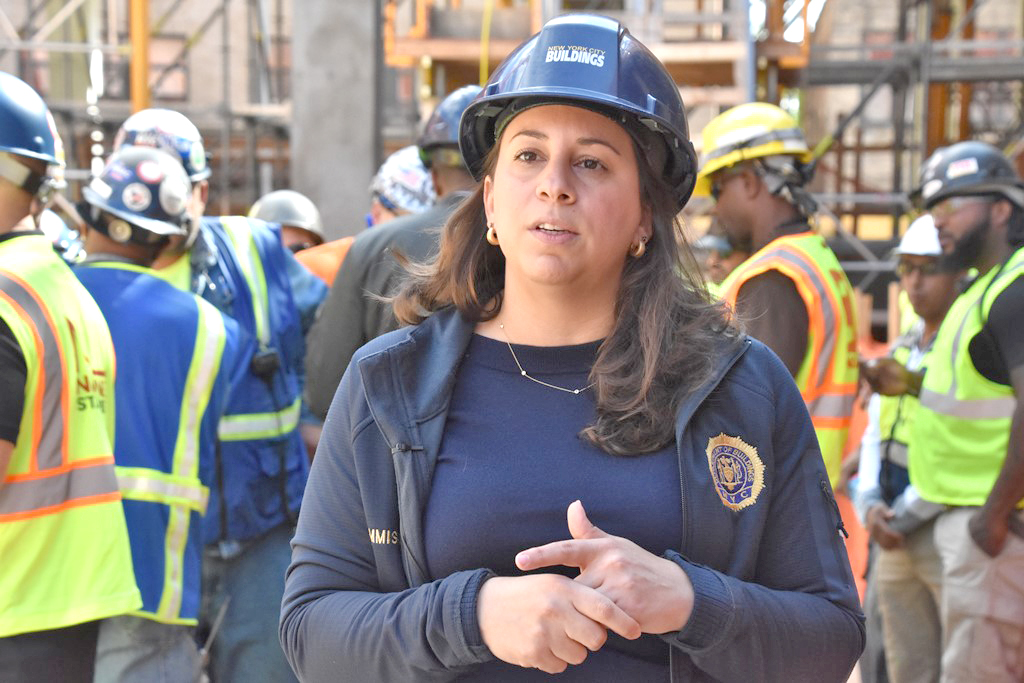 Melanie La Rocca talks tactics, tech and who’s to blame when it all goes wrong

When Melanie La Rocca took the reins of the city’s Department of Buildings last May, her old boss, Christine Quinn, said, “She has been training for this position her entire career.”

In her office at 280 Broadway, a relaxed and friendly La Rocca sips her coffee from a mug and shares pleasantries about, her cat, her partner and her three nephews like she’s not carrying the weight of a whole city on her shoulders.

But when the interview begins in earnest and she is asked what it’s like to stand in her shoes, La Rocca doesn’t miss and hit the wall.

“But in my job, I permit projects that deserve permitting, meaning that they have met the zoning resolution and building code, that’s it. I just make sure the projects that happen are legal.”

In a nutshell, she has it, but as Quinn said, whether she knew it or not, La Rocca has been building towards her role for years and, with her fingerprints all over some of the biggest building regulations ever to be implemented in the US, she’s also standing on the precipice of a legacy that will change New York City forever.

When she was studying political science at Fordham and juggling a retail job at a corner store in her native Flushing, La Rocca said she had her eyes set on federal government.

She landed an internship with Congressman Charlie Rangel and later Senator Chuck Schumer, but said she very quickly realized it wasn’t for her. “It was a good, fascinating experience, but I wanted something more tangible. The fact of the matter is, the relationship at the city level between a problem and a solution is so much more tangible, it’s real, it’s more immediate.”

Her first summer out of college was spent interning at the City Council, which led to a job working for then Speaker of the Council, Chris Quinn. “I look back at that time very fondly. To be that young, to do that kind of work. Working in a district office really makes a person – that is some tough work … you deal with anything in everything under the sun. A very good way to learn is to be thrown into the fire and to figure it out.”

At the time, Quinn’s District 3 was a hotbed of change. Covering Chelsea, Greenwich Village, Hell’s Kitchen and parts of West Village, SoHo and Murray Hill, Quinn worked through multiple rezonings permitting as-of-right residential development, regulations that limited the ground-floor width of stores, the Brodsky Organization’s conversion of several buildings bought from the General Theological Seminary and the mammoth West Side rezoning that made way for what is today Hudson Yards.

“This is where I sort of fell into my love for the things that I feel passionately about now,” said La Rocca, recalling late-night community board meetings and the jostling to mark a middle ground. “There were so many different rezonings happening, so many different land use changes, so many different ways that buildings were literally changing.

“Rezonings happen, they come and they go, and it’s, you know, it’s what the community wants to come together and ask for, and push for and see out of whatever rezoning is coming. It’s for everyone to decide and, as an observer, it is a very interesting process.”

In 2014, La Rocca joined the Schools Construction Authority and, within four years was named vice president overseeing the real estate group. She worked with communities to create new schools and was credited with helping Mayor Bill de Blasio implement his Universal Pre-K program.

“I think I come from an interesting and unique background,” said La Rocca. “I started in city government in the legislative branch which gave me a good feeling for what people need and what they want from their city government, and what their problems are and how to deal with them, but it also gave me a great experience and perspective of seeing a city in transition and to see what it takes to make a project happen right. People have all sorts of grand ideas, but what does it actually take to make it happen?

“That’s not just putting up the rail yards right, it’s everything in between, from small projects to mega projects. So I have a real affinity for that work, which led me to a place that actually did that work, hands on, and a place where it was deadline driven, you know. First day of school is only one day a year. And so you either make it or you don’t, and don’t is not an option.”

Her first job when she joined the DOB, said La Rocca, was to get her team of 1,700 on board with her vision. “This department is made up of really amazing people who are invested in us, and invested in the city, and invested in what we do, and really love their work. My job is to make sure that those folks have an outlet and that the rest of the universe understands and really sees that leadership, experience and dedication that exists here.

“In that same vein, I know we can be stronger supporters of tenants and use our traditional vehicles to help support tenants to make sure that they can stay in their homes. And the same for workers. I want every worker that walks on to a job site to go home to their family safely. It’s our job to make sure people are safe. We can only do so much, but we’ll use the stick to try to get you to come along and to really understand that it’s not a suggestion that we want your workers to be safe. That’s a mandate. That’s a requirement.

“And we should be better at communicating with people. And not just those that are in the trade. There are plenty of homeowners and small property owners who deserve to have the same kind of access to information that other people have that are in the industry, that are coming to sit down with a plan examiner, or to come and sit down with our construction safety folks. There should be communication at all levels and the same high level of customer service for major developers and regular folks.”

And her door is wide open to new ideas. As the city now debates using drones to inspect building facades, La Rocca issued her own call for technologies that can her her work. “We’re in the business of making sure things work. And that things are safe. So my emphasis is always going to be on things that promote those two pieces.

“We are certainly not a place that shies away from wanting to hear from people who have great ideas. And this is a call for great ideas. If you have it and you think it can help make the city work better and stay safe, then bring it our way. “

While she believes there will always be a human element to the DOB’s work, La Rocca said, “There is not a rejection of technology. There is an embracing of technology. We all just collectively need to make sure it works. And it does what you need it to do and what we need it to do, which ultimately serves those two goals of making the city work better and making the city safer.”

While safety, transparency and communication have been watchwords of her freshman year as commissioner, La Rocca is staring down the barrel of a series of local laws that will make New York one of the most sustainable cities in the world.

November saw the introduction of Local Laws 92 and 94 requiring all new and existing buildings undergoing certain major roof renovations to have a solar photovoltaic system, a green roof system, or a combination of the two.

2020 kicked off with Local Law 33 which requires property owners to display the energy grade of their building.

Local Law 97, what La Rocca has called “the big kahuna,” will be rolled out over the next 10 years, creating one of the world’s biggest enforced retrofitting programs aimed at cutting carbon emissions from 50,000 city buildings.

“This is the first place anywhere in this country that’s doing something like that, so all eyes on us to make sure it’s done right,” said La Rocca championing chief sustainability officer Gina Bocra and her “gangbusters group” who are “doing the lion’s share of the work to set that up and make sure that goes forward successfully.

“Sustainability is hugely important not just for meeting the actual mandates that the mayor set out, but hugely important for the actual existence of the city. And I get it, it seems like a very big challenge and I’m not suggesting that it won’t take work, but let’s all take a moment to just stop and relax for a second.

“All the law is telling you to do is look at your building and make an honest assessment and then fix it. It’s no different than any other problem a property owner has. You have a leak in your building, you stop, find out where its coming from and then you fix it. It’s the same exact concept.

“Yes, there may be some buildings that require capital cost. But the one thing I would say is come in and talk to us, have the conversations with us earlier, and do not be short sighted.

“You’ve got a couple of years to get there. The city has programs available to help owners along the way, we can be the tool, and the resource that gets you where you have to go.

“I think the department is well positioned to be a resource to not just property owners, but truly for anybody. We should be your first phone call for when you’re buying a home. We should be your first phone call before you do any work, big or small right. If you’re buying a home, you should want to know what the department knows — are there violations are there issues? We can help you navigate the system. ”

La Rocca said she is committed to her job overseeing the safe and lawful use of nearly 1.1 million buildings and thousands of construction sites in New York, but admitted it has already changed her in dramatic ways.

“When somebody dies, it is a feeling you don’t get used to. You don’t want to get used to it,” she said.

“A woman lost her life. We did bring on additional staff. We had already set in motion changes to our facade rules which strengthened our penalties and added to the inspection requirements. It’s not about right or wrong though, it’s about what can we do to be more proactive.

“How else can we support the system to make sure that owners are well aware of their responsibilities and they do something about it rather than wait for something to happen?

WeWork sells stake in The Wing