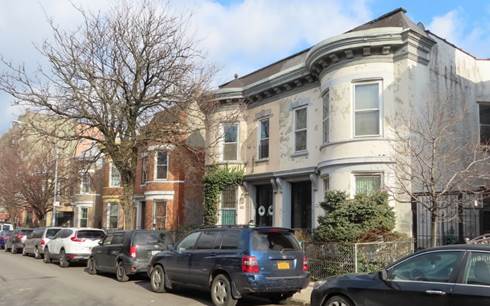 A street in the South Bronx has been designated a Historic District.

The city’s Landmarks Preservation Commission (LCP) voted to designate the Manida Street in Hunts Point as an example of early-20th century development.

“I am so pleased that New York City’s 150th Historic District is the Manida Street Historic District” said LPC chair Sarah Carroll. “As Chair I have committed to ensuring that the Commission prioritize designations in areas of the city less represented by landmarks, like the South Bronx. This gem of a district is not only a reminder of the early-20th century residential development of the South Bronx, but also reflects this community’s long-term commitment to their neighborhood.”

Designed by architects James F. Meehan and Daube & Kreymborg, and built in 1908-09, the Manida Street Historic District consists of 42 semi-detached row houses built in “a modest Renaissance Revival style, some combined with elements of the Flemish Revival style.”

Two development companies, both operated by architect and builder James F. Meehan, built the 42 houses by the spring of 1909. Meehan served as architect for the houses on the west side and hired the architectural firm of Daube & Kreymborg to design the houses on the east side. The semi-detached houses share a uniform style and form with rounded projecting bays and mirror-image facades.

The mid-20th century brought drastic economic and infrastructure changes that had devastating impacts on the South Bronx. Today, however, Manida Street appears much as it did more than a century ago, according to the LPC, “with a strong sense of place and historic character distinct from its more industrial and commercial surroundings.”

Council Member Rafael Salamanca, 17th Council District, The Bronx, said, “In a city that is ever-changing, Mandia Street serves as a link to the rich history of the South Bronx. Working with community advocates who have vigorously pushed for this designation for over a decade, I am proud to support the Manida Street Historic District, which would hold the distinction of being New York City’s 150th historic district.”