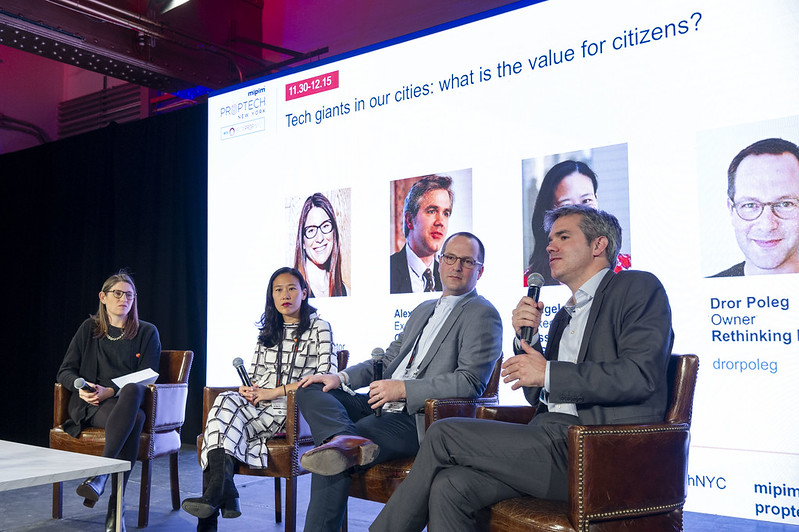 Good tech may not be pretty, but it works

The best new technology is the invisible kind that helps everyday folks go about their business with stuff that works.

At least according to author and tech advisor Dror Poleg, a speaker at last week’s MIPIM Proptech summit in New York City.

Discussing the value technology brings to major cities with Greater Paris Investment Agency boss, Alex Missoffe, and Angela Pinsky of the Association for a Better New York, Poleg said today’s mobile population is forcing the world’s major cities to compete for residents like never before.

“Cities really have to earn their keep every day and, because of that, it comes down to things that are not very techie,” he said. “Maybe they are achieved by technology, but it’s technology that’s invisible in making their city more walkable, or making the air cleaner or the subway run on time. The best cities are the cities where they don’t have glamorous screens and cameras everywhere, they just have stuff that works.

“We see too many cities focusing on tech for techs sake and installing all sorts of things that might look cool but are not necessarily solving a lot of bread and butter issues that remain unaddressed,” he added, claiming that the most successful smart city in the world is Tokyo, for nothing more glamorous than “a subway network that works, things are clean and they run on time, garbage is collected and sorted out properly.”

In a swipe at the New York’s efforts to bring free wifi to the people, he added, “We have these LinkNYC wifi kiosks all over the city but then I go underground and the subways are dirty and it doesn’t arrive and nothing can tell me when it will. Before we install these high-tech things, it might be good for the government to focus on using technology to solve bread and butter issues.”

Agreeing that applying technology to infrastructure is fundamental to the value tech can bring to any big city, Pinsky said she believed New York has planted the seeds of a new economy with education, training and workforce development programs all in place.

However, she admitted, “This is an old city and has the limitations of older cities. There is a recognition by almost every other industry that lives here that the city is hard to deal with. The same way cities have to prepare to work better with technology companies and welcome these technology companies, there has to be a realization from technology companies that they have to bake in to their working assumptions when you come to work in cities like this.”

Pinksy said it was unrealistic to expect residents to turn a blind eye to roads being ripped up for broadband one week and cable the next and, with the weight of the taxpayer of their back, expect the city to take a gamble on some new-fangled tech that might or might not be a boon for the folk that live there.

“Often, they avoid new technologies because the consequences of picking a technology that goes wrong are so much greater than the benefit of getting a technology that goes right, which is why things like subway signaling, the fact we still have scaffolding all over our buildings because people may have to go up there instead of using drones – all of these things are not moving at a pace the rest of the movement is moving at but could also benefit from these technological improvements in a much more exponentially bigger way than the private sector.

“One of the ways [tech and government could work together] is figuring out how to take some of these technologies that have a public benefit and figure out a way to make sure that they are safe and usable in a scalable kind of way and implement them in the marketplace in a faster way rather than wait ten years to see if it works in the private sector then adopt it 10 or 15 years down the line.”

On the bright side, New York has some nifty new start-ups and tech-enable partners that could end up changing a whole lot for the city. For the first time ever, the Census will be available online next year, a move that will solve some problems while creating others, according to Pinksy, but one where the tech sector can certainly help ensure the city gets an accurate count.

She said the proliferation of ride-sharing is also “incredibly important” to the evolution of the city where transit deserts and indiscriminate subway lines have created a system that brings people into the middle, and then spreads them all back out.

“In order to get from Queens to Brooklyn, you basically have to go through Manhattan and that’s another hour when you could be going straight across in less than that. The car sharing programs that can cut that hour-and-a-half commute down to 45 minutes are critical for our economy.

“There are a lot of emerging technologies in this space all working in different directions, but I think at some point they will come back down to one conversation and, if we can use these technologies smartly, then the city will be much better off.”

When it comes to who’s picking up the bill for all of it, Missoffee pointed to an effort in his home country to power electric car charging stations with steam from trains pulling into the station.

Billing itself as “a living lab for new urban mobility,” Paris has been at the forefront of the electric and autonomous car movements as a means to reduce heavy pollution. Home to the first electric ride sharing platform and test ground for the world’s first floating electric warehouse, last month the city announced plans for electric water taxis on the Siene and flying taxis that Paris Aéroporthopes hopes to deliver as soon as 2024.

Jersey politicians urge developers to look beyond its waterfront