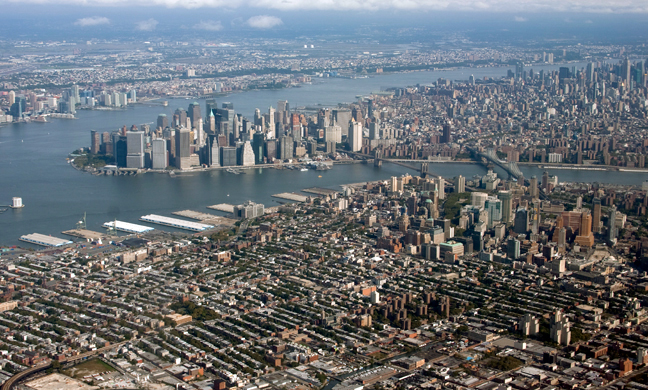 Far East Brooklyn nabe on the verge of residential boom

The Brooklyn neighborhood of East New York has been on the tip of everyone’s tongue lately, with the area posed to be the next new frontier.

East New York is an area that is so far East in the borough, it isn’t always included on real estate listings and real estate brokerages’ websites.

Bordered by Brownsville to the West, Ozone Park to the East, Bushwick and Ridgewood to the north and Jamaica Bay to the South, the area is being talked about as one of next gentrified neighborhoods, like Crown Heights and Bushwick before it.

Mayor de Blasio has made East New York, an area that has been notoriously crime-ridden and where more than half the population lives below the poverty line, a prime neighborhood in his affordable housing plan. The plan, which includes 15 neighborhoods in all but kicks off in East New York, seeks to build 80,000 new affordable apartments and preserve another 120,000 over the next 10 years.

Main thoroughfare Atlantic Avenue, which runs through the area, is specifically mentioned in the plan, which will see the current re-zoning rules altered to make way for a swath of new residential development.

Mid-rise housing along Atlantic Avenue and Pitkin Avenue as well as changes to the major subway transit hub Broadway Junction, similar to Downtown Brooklyn’s Atlantic Terminal, are part of the plan, and city officials are looking to bring office, retail, movie theaters and possibly a college campus to the area.

Many leading residential brokerages aren’t as well-versed in the area and hesitated to talk about the neighborhood, but Jonathan miller of Miller Samuel Appraisers told Broker’s Weekly that the area is part of a phenomenon he calls “neighborhood creep.”

“There has been a tremendous amount of speculation on the townhouse market,” said Miller. “A lot of flipping, a lot of activity, and a big part of it has been neighborhood creep – this idea that people being priced out of the northern region of Brooklyn are expanding and looking for more affordability.”

Miller, who compiles market reports for Douglas Elliman, has seen a “significant” rise in housing prices in Eastern Brooklyn.

Grouping together East New York, Bed-Stuy, Cypress Hills, and Crown Heights, Miller found that the median sales price for all residential properties in these areas shot up 26.8 percent year over year.

In the second quarter of this year, the median sales price was $523,172. A year ago that number was $412,500. Compare that to the well-established areas of northwest Brooklyn like Brooklyn Heights, Carroll Gardens, Park Slope Red Hook, Ft. Greene and Cobble Hill, where in those areas, the median sales price for all residential properties is $849,500, according to 2Q numbers.

“It’s not specific to Brooklyn,” said Miller of the ‘neighborhood creep’ theory. “It’s a phenomenon across the city – this quest for affordability in the sales and rental market, we’re seeing core markets that are the most expensive rising to the point where buyers are seeking out affordability and spreading out. And that’s what happening in this part of the city.

The housing stock isn’t very diverse in East New York – according to Streeteasy there are no new development projects or co-ops currently listed on the market.

A newly-renovated building at 577 New Lots Ave. made headlines recently with the building being marketed as a “new frontier,” with sleek and modern units starting ranging from $900 for a one-bedroom to $1,500 for a two-bedroom apartment.

“If you’re a long time resident of a neighborhood, like say Bushwick, and you’re looking at prices being paid by new tenants or buyers as so much higher than what had been the norm, whereas the buyers and renters see it as so much less expensive than the neighborhood they came from – that’s the creep phenomenon,” said Miller. “Pricing from the original neighborhood spills at a lesser degree into a new neighborhood.”