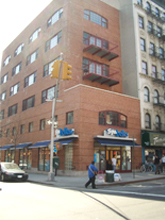 Steven Kachanian’s Klosed Properties has bought a 2,200 s/f retail condo at 202 Spring Street for $7 million. The deal is another sign that Soho’s retail market is continuing its rapid expansion – geographically as well as financially.

The retail condo at the corner of Spring and Sullivan Streets is well beyond Soho’s retail heartland. But Kachanian hopes that a flurry of new developments nearby and skyrocketing rents around Broadway will drive more retail into western Soho.

“We are confident that foot traffic is going to increase and rents will spike up,” he told Real Estate Weekly. The current tenant, a nail salon, has a lease below market value until 2016 with no renewal options.

A partnership led by Barry Goldoff, who had developed the building, sold the condo. His son David Goldoff of Camelot Realty was the broker on record.

Klosed was bullish enough on Soho’s continued growth to accept a cap rate of under three percent on the deal. “I’ve done this for the first time in my life,” Kachanian explained. “It takes a lot of courage, but we’re very excited about the property.” He said the parties had been working on a deal for two years until finally reaching agreement.

The purchase of 202 Spring Street, with an additional 2,200 s/f in the basement, is Klosed’s second major downtown retail deal this summer. In July, the company bought an 8,000-s/f retail condo at 80 John Street, also for $7 million.

In a recent interview, Kachanian explained that the company began focusing on retail seven or eight years ago, after investing in multifamily building in the 1990s. “Retail is a lot more dynamic than residential real estate,” he said. “We try to buy properties in areas that are up and coming and haven’t reached their full potential. In retail, rents can double from one year to another if you manage it right.”