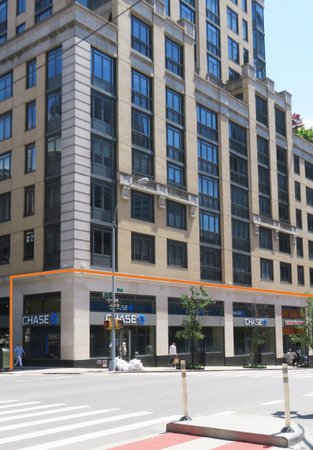 A retail condo at the base of luxury Grand Beekman Condominium in Kips Bay is being offered for sale through and Eastern Consolidated team.

Ben Tapper, senior director and principal, is representing the owner. Gary Meese,is the analyst for the sale of the 7,039 s/f condo at 900 First Avenue, which is fully leased to Chase, Dunkin’ Donuts and Westcliff Pharmacy.

“This offering presents investors with the opportunity to acquire a well-located retail asset on the ground floor of a 113-unit luxury building in Midtown East,” said Tapper, who has listed the condo at $13.75 million.

“The retail condo offers the stability of a fully leased income-producing property, while containing inherent upside potential over the long term. Additionally, Chase has been in their space since the building first opened in 2005 and their customer deposits have increased over 630 percent in the last 10 years. This is the largest percentage increase of any Chase branch in the entire zip code.”

The corner space offers 5,324 s/f on the ground floor and 1,715 s/f on the lower level, plus 130 ft. of frontage along First Avenue and another 35 ft. along East 51st Street. All of the retail spaces are accessible from the First Avenue side of the building.

Nicknamed Bedpan Alley for the proliferation of hospitals along the corridor, the neighborhood is also home to the United Nations and the city’s budding life sciences sector.

Cushman & Wakefield has been retained to market 30-38 Franklin Street, a commercial building with development potential in Greenpoint, Brooklyn.

A Cushman & Wakefield team consisting of Brendan Maddigan and Ethan Stanton will be leading the marketing efforts on behalf of the property’s seller, Franklin Street Associates, LLC.

“This property is a significant commercial assemblage with more than 120 feet of prime frontage on Franklin Street in the Greenpoint and Williamsburg industrial business zones,” said Maddigan

The 15,625 s/f building spans four tax lots and offers more than 200 ft. of frontage along Franklin and Banker Streets.

Holliday Fenoglio Fowler (HFF) brokered the sale of 321 East 22nd Street, a six-story building with 117 residential units and 2,800 s/f of commercial space, which is leased to Synergy Fitness.

“Our strategy is to make improvements to the building and hold it for the long term,” said Akelius regional vice president Kunal Chothani.

“This is a land bank, value-add opportunity to acquire a historic property in downtown SoHo New York,” said Lee of the property at 446-448 Broadway.

Designed by architect John Butler Snook the five-story cast iron building sits on a 50 by 120 ft. lot with 32,810 s/f. Zoning is M1-5B which allows for retail, office and live-work. The Fee Simple Offering is being listed for $58 million.

John Butler Snook was among the most prominent architects in New York between 1846 through 1887. In 1869, Cornelius Vanderbilt employed him to design the first Grand Central Depot, which was intended to serve as the main passenger terminal for New York City.

Metrovest Equities in partnership with Anda Realty and Metropolitan Realty have acquired the fee interest in 307-309 6th Avenue, New York, NY for an undisclosed price.

The retail portion was formerly a CVS, but has been kept vacant since 2014 for development purposes. As of right 40,000 s/f  can be built on this site with an existing 6,760 s/f floor plate.

This historic strip of Greenwich Village retail has begun to pick up steam with new tenants including City MD, Xi’an Famous Foods, Le Pain Quotidien, Sweet Greens, and Liquiteria, while the majority of retail markets continue to struggle.

Ownership plans on running parallel paths with marketing the retail space toward long term corporate tenants, while at the same time applying for development approvals from the city.

Ian Lerner of Cushman and Wakefield has been tapped for retail marketing efforts.

Lexerd Capital Management, a New Jersey-based sponsor of private equity funds, announced that one of its funds has acquired Springs at Braden River, a 270-unit garden style multifamily community located in Bradenton, Florida.

Lexerd renamed the property The Lory of Braden River. The purchase consists of 15 residential buildings and one leasing office on 41 acres.

Albert Lord III, founder and CEO of Lexerd, said, “Braden River is in a highly desirable section of Bradenton, between the city’s active downtown area and the prestigious residential community of Lakewood Ranch.

“We see a tremendous opportunity to add value through additional interior renovations, featuring some of the latest design and efficiency trends in the industry.

Lord added, “We will continue to work to find unique investment opportunities both in Florida and throughout the greater Southeast US region.”

The properties were sold with 14 vacant units in need of renovation as well as retail vacancies. The buyer plans to deploy significant capital to upgrade the common areas, apartments and retail spaces.

Michael Guttman represented both the buyer, Riverdale Avenue Properties, L.L.C. a local investor, and the seller.