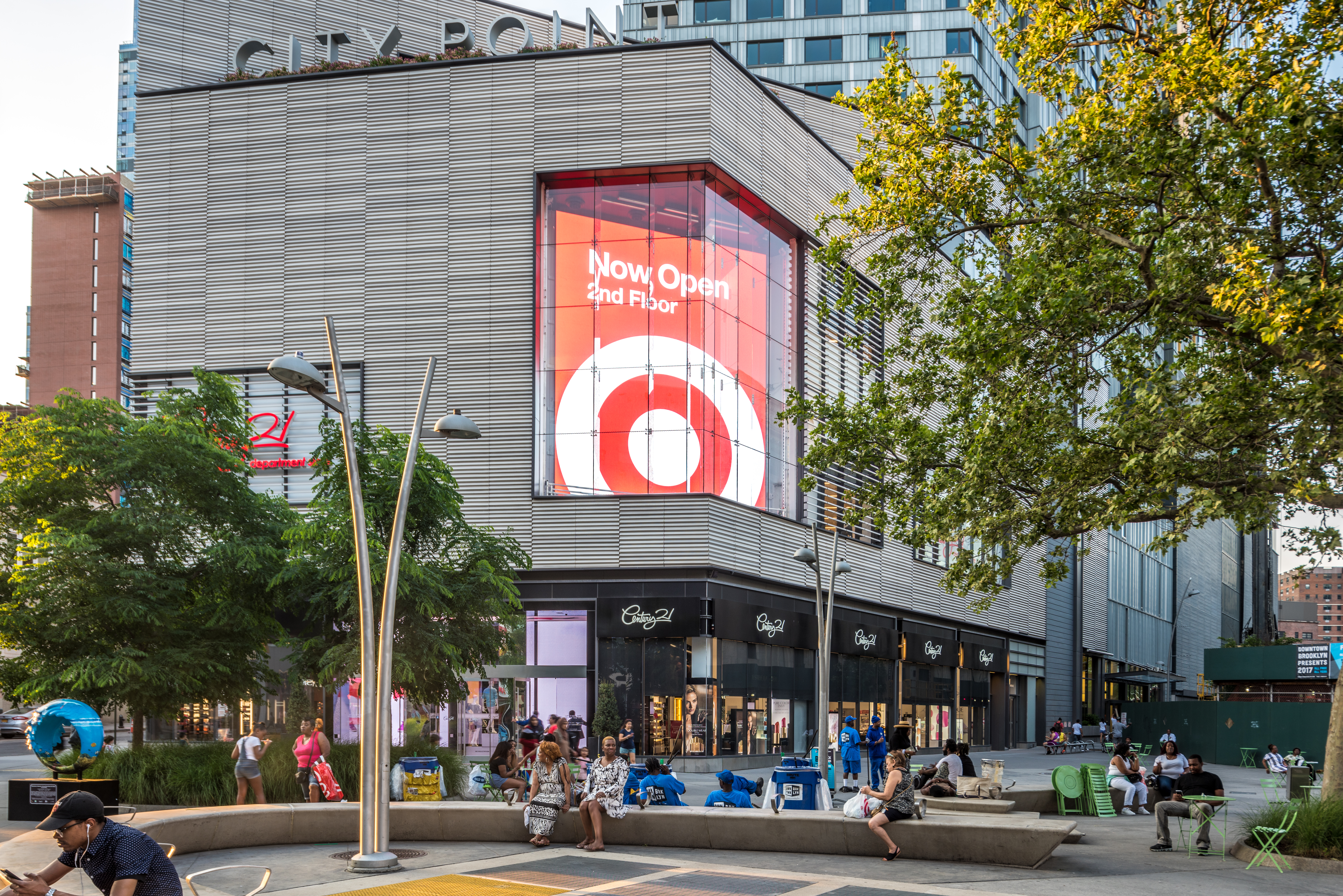 Downtown Brooklyn’s City Point development has found the right formula for bringing in visitors, in the midst of a national slump in the evolving industry.

In the works for years, City Point opened some of its major anchors in the past few months — including Trader Joe’s and Dekalb Market food hall — and has drawn steady traffic ever since.

The project, located in the heart of Downtown Brooklyn on a bustling intersection, is anchored by tenants like Trader Joe’s, Century 21, and Alamo Drafthouse.

The food hall, Dekalb Market, located on the lower level of the development, on recent weekends has been packed with visitors sampling food from 40 different vendors.

There are still opportunities for retailers to find a space at the complex too – the leasing team at City Point is still in the process of leasing out its final spaces, and they are looking for retailers who are off the beaten path.

“We’re not following a traditional shopping center leasing program which has been great and part of why it’s resonating with the audience,” said Paul Travis, president of Washington Square Partners, which along with Acadia Realty Trust, developed the 1.8 million s/f retail, residential and office space complex.

Flying Tiger, the quirky danish retailer that has rolled out three stores since in New York City since 2015, is now open at City Point, and Little Giants, an online children’s clothing retailer opened its first brick-and-mortar store at City Point. Joybird, a online furniture retailer, is also opening its first brick-and-mortar store at the development.

“It’s a very eclectic mix which I think reflects the neighborhood around us, and that people come here for an experience that they can’t get elsewhere,” said Travis.

“My own belief is that demographics change over time,” he said. “Boring old people like me want to go in and buy a shirt, and younger shoppers are responding to something that’s much more experiential. So when they go into a retail center looking to be engaged and have a place they want to spend some time in.”

The Dekalb Market food hall within City Point is one of those experiences. The team wanted a variety of food vendors that would fill in the gaps for Downtown Brooklyn, which tended to be lacking in food options. They brought in Anna Castellani, the founder of gourmet grocery store Foragers Market, to curate the food vendors.

“We made a decision about two and a half years ago to do food at a much bigger scale in a different way,” said Travis.

The last phase of retail will be the ground-floor spaces, which the team is currently in the process of leasing.

When it came time to form a marketing plan for the development, Travis and the rest of the team at City Point quickly realized that traditional advertising wasn’t going to cut it. Instead, they only did advertising on social media, and it garnered an “enormous” response.

“There were literally millions of impressions,” said Travis. “It’s been really amazing. Everyone’s pleased and to some extent surprised at the amount of traffic.”

Travis said the team expected that it would take some time for traffic to ramp up in the summer, but they were wrong.

“We thought it would take a year to get to this level,” he said. “Hopefully in the Fall we’ll see this trend continue more so. The experience so far is really beyond what we anticipated.”

Rovt taps CBRE to take over leasing at 14 Wall Street