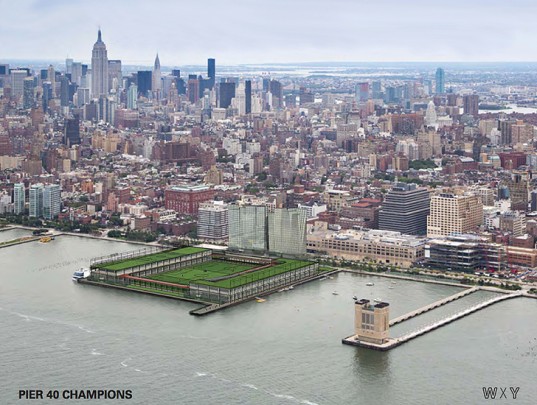 Westbrook Partners and Atlas Capital Group is partnering with Oxford Properties Group for the redevelopment of the St. John’s Terminal site in the West Village.

The five-building, 1.7 million s/f project, located at 550 Washington Street across from Pier 40 in the Hudson River, will be developed into a mixed-use property with retail and 450 units of affordable housing. Westbrook, Atlas and Fortress Investment Group acquired the property for $541 million in 2012. Westbrook and Atlas bought Fortress’ stake in the project for $200 million in 2015.

Westbrook and Atlas was said to have been looking for a partner to make a $100 million contribution to the project. In November, the firms expressed concern about moving forward with the project due to a slowdown in the luxury residential market. A previous report from the Real Deal said that Brookfield Property Partners was in talks to acquire a stake in the complex.  Other rumored bidders for the site include Vornado Realty Trust and RXR Realty. Oxford did not disclose its stake in the project.

The St. John’s Terminal is a three-block long complex that was originally built in the 1930s. The developers initially proposed a project with 450,000 s/f of condos, 100,000 s/f of retail and a public park on a defunct elevated rail line. Plans for the site changed after City Planning included a provision blocking a “big-box retail” alternative for the project. The agency instead pushed for a minimum of four retail establishments at the west side of West Houston Street and three stores at Clarkson Street. Westbrook and Atlas said that they expected delays due to the alterations to their proposal. Plans for the site now include 15,86 apartment units, a hotel or office building and 400,000 s/f of retail.

According to an announcement from the firms, Oxford will lead the development of the commercial portion of the site. Westbrook and Atlas, meanwhile, will continue to lead the residential development.

Last year, the City Planning Commission approved the sale of 200,000 s/s f of air rights from the Pier 40 site, which allowed Westbrook and Atlas to proceed with the project. The deal was valued at $100 million. The Hudson River Park Trust, which sold the air rights, earmarked the funds for repairing the pilings at the pier. Westbrook and Atlas funded the air rights acquisition with a $300 million mortgage from Morgan Stanley. The project gained final approval from the City Council last December.