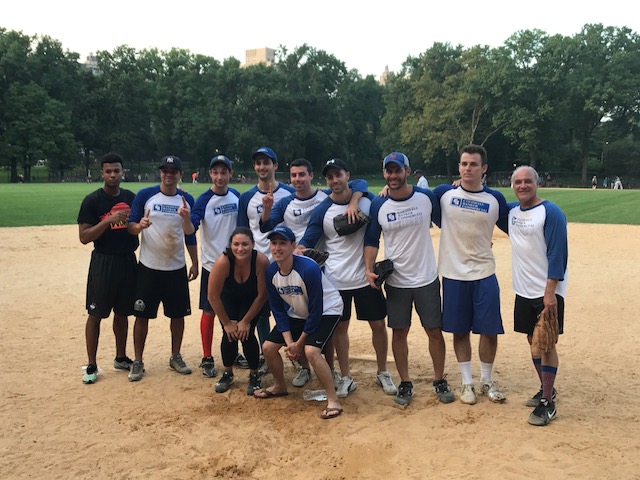 CBC Advisors played a tense and exciting championship game against RKF. The score was tied five to five going into the bottom of the sixth inning, when a homerun by CBC Advisors’ Brett Hanfling put them ahead six to five. RKF had the bases loaded with two outs in the top of the seventh inning, but CBC Advisors remained steadfast for the win. Both companies had a ton of support from colleagues, league players and even Central Park visitors, which made for a rousing game.

“We played as a team, with a great attitude and lots of dedication and determination,” said team captain Jeffrey Rosenblatt, executive managing director and broker at CBC Advisors. “It was a fun season with serious competition, and we are already looking forward to next season.”

“Congrats to the CBC Advisors team for winning the championship,” said league commissioner Cameron Mitchell, associate at Cushman & Wakefield. “The game was quite close, coming down to a bases-loaded putout in the 7th inning. Hard fought with a number of lead changes and momentum swings.”

Now in its 29th year, the Real Estate League is a New York softball league comprised of REBNY companies who play at Central Park’s ball fields during a season that spans from Memorial Day through August. The top teams earn a place in the league’s playoffs, which start in early August and culminate in the league’s championship game the week before Labor Day.