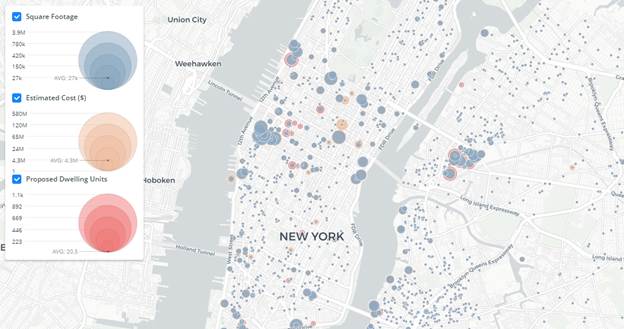 New York City is in the midst of a building boom, with nearly 200 million s/f of major projects in the works throughout the five boroughs.

That’s seven square miles of floor space, touching the residential, commercial and industrial submarkets and everything in between. It’s a lot to keep track of.

City Hall is making it just a bit easier to follow who is building what and where with the “Construction on Your Block” online portal, an interactive map showing where projects are taking place, what they are and roughly how much they’ll cost.

Linked to the Department of Building’s database, the map also shows who the general contractor for each site as well as the permit status.

“This real-time map puts the power of DOB’s data in the hands of all New Yorkers — giving detailed information about construction on your block, your neighborhood, and citywide,” Buildings Commissioner Rick Chandler said. “The public owns this data, and we are committed to putting it to work for all New Yorkers.”

Each project is represented by three circles on the map: blue for square footage, red for number of proposed housing units and orange for cost. The larger the circle, the bigger the number.

It also highlights information about the number of permits file and total square footage, breaking both down by type of construction, borough and even community board. At the time of publication, there were nearly 7,500 permits on file, 4,700 for ground-up construction, 2,800 for “enlargement” projects.

From the looks of it, the rising office towers of Hudson Yards accounts for much of Manhattan’s square footage, while Brooklyn’s construction leans more residential, as it is poised to add 44,000 new dwellings compared to Manhattan’s 42,000.

The new map is part of the DOB’s push to make data more readily available online. Earlier this year it rolled out a map detailing the location of the city’s 8,000-plus permitted sidewalk sheds.