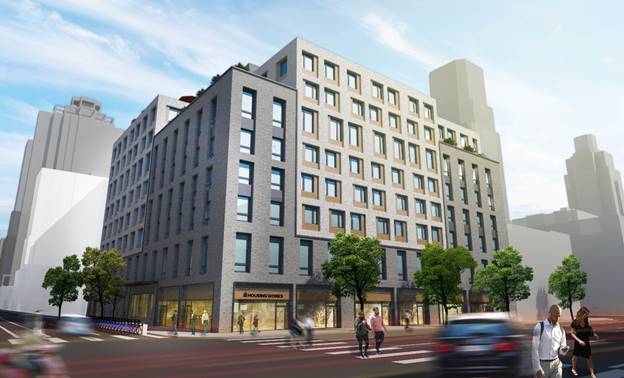 The New York City Department of Housing Preservation and Development (HPD) Commissioner Maria Torres-Springer announced today the selection of development teams to build  258 units of affordable housing on two City-owned sites in the Clinton/Hell’s Kitchen section of Midtown Manhattan, one located at 806 9th Avenue and another located at 705 10th Avenue.

Both sites were identified through the City’s Western Rail Yard plan, today known as Hudson Yards, to be developed into affordable housing to support the future growth of the city as a place for residents of all economic levels.

Ninth Avenue site: located at 806 Ninth Avenue, this project will be developed through a partnership between Hudson Companies and Housing Works, Inc., a New York City-based nonprofit that provides supportive housing, healthcare, and a range of social services. The development will contain approximately 100 units of affordable and supportive housing for very low and low-income households, with units set aside for the formerly homeless. The building will feature approximately 11,000 s/f of retail space along Ninth Avenue, including a Housing Works thrift shop. The building will include office space for New York City Transit and below grade parking for emergency vehicles.

Tenth Avenue site: located at 705 Tenth Avenue, this project will be developed by a team led by Douglaston Development and The Actors Fund, a nonprofit that provides housing, as well as social services, health care and insurance counseling, and secondary employment and training services for all people in performing arts and entertainment.  The development will contain approximately 160 affordable units that will serve a range of households, including very low, low, and moderate-income households, with units set aside for formerly homeless households. The ground floor of the new building will have an arts-oriented community space to be operated by Spaceworks, public restroom, and adjacent open space that is being developed by the NYC Department of Parks and Recreation.

“Housing Works is honored to co-develop this groundbreaking project for people living with HIV and low-income families in the Hell’s Kitchen neighborhood.  For nearly 30 years, we have demonstrated that housing equals healthcare when it comes to the long-term survival of those living with HIV, as those who have a safe and stable place to live are much more likely to achieve “undetectable” HIV status,” said Andrew Coamey, Senior Vice President for Housing and Capital Development at Housing Works.

“The AIDS epidemic is ongoing and the Hell’s Kitchen area maintains New York City’s highest rate of existing residents living with HIV as well as being one of the neighborhoods with the highest new infection rates.  We look forward to working with our public and private partners and neighborhood stakeholders to deliver this important project, including a Housing Works flagship store and neighborhood retail within an attractive environmentally responsible building designed by CetraRuddy architects,” said Christopher Tepper of Hudson Companies.

“Douglaston Development is grateful for the opportunity to work with our partner, The Actors Fund, the City of New York, and Spaceworks to realize a plan for 705 Tenth Avenue. The site poses both engineering complexities and a unique design opportunity.  To respond to these we have assembled a first-rate team to provide a contextual design that will integrate the new building with the future park. We look forward to continuing our deep roots in Hell’s Kitchen and deliver a project that provides much needed assets to the local community – mixed income housing and a community space that adds to the already robust and vibrant network of arts and culture offerings in Hell’s Kitchen,” said Jeff Levine, Chairman, Douglaston Development.

“One of the challenges we face in our communities, and citywide, is the displacement of working artists and the loss of affordable artist workspace,” said The Actors Fund President & CEO Joseph P. Benincasa. “Through the thoughtful integration of affordable housing and arts and community programming, this building will help to anchor the Clinton/Hell’s Kitchen community and build upon its rich cultural history. T”