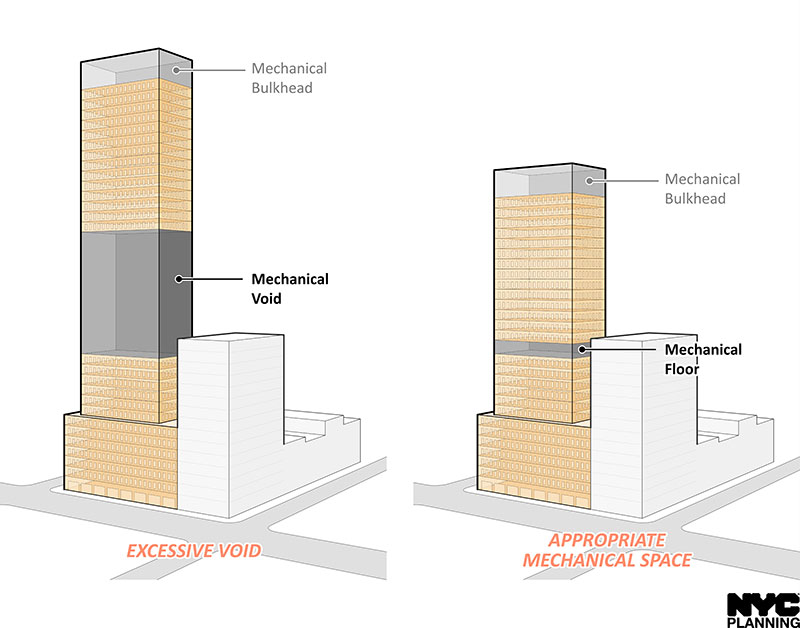 The Department of City Planning has rejected a call to extend a review of controversial zoning loophoole that lets builders artificially inflate the height of their properties.

Critics say that oversized voids are used to give residents in the building a better view and inflate the prices of a tower’s units.

“Creating large, enclosed and empty spaces within a building for the sole purpose of making it taller and enhancing views of residents on the top floors is not what was intended by our zoning rules,” said city planning commissioner Marissa Lago.

“This proposal offers a simple and elegant fix to ensure that apartment buildings produce housing, that their size is predictable for communities, and that they can’t play leapfrog with our skyline. We welcome innovative and beautiful architecture, not building features that are nakedly gratuitous.”

Industry professionals, however, have taken exception to the city’s proposed bill, claiming the initiative is being forced through committee and fails to address the evolving natures and needs of mechanics in new buildings.

“The conclusion is inescapable that the careful and deliberate study and analysis that is the hallmark of the Department’s work on complicated technical issues has been disregarded here,” said a statement from Real Estate Board of New York, President, John Banks.

“Rather the Department has rushed an incomplete proposal to referral and launched an expedited public review process with no apparent purpose other than to stop construction of as-of-right residential projects…”
As an alternative for a proposed 30-day review period, Banks and REBNY proposed that the review last for 90-days to include more industry input and commentary regarding what effect the amendments’ might have and why they exist.

Specifically, the zoning regulations would deduct any void exceeding 25 feet from the floor area of the building in addition to deducting any void located within 75 feet of another.

However, on Monday, a DCP spokesperson said that the current review would end as scheduled within the next several days.

“There is no need to delay this hearing. This voids proposal is simple and targeted to specific neighborhoods. There is ample time for public to digest and comment on it in the coming weeks,” said a DCP spokesperson.

Once referred to the Planning Commission the amendments will undergo a public hearing before being voted on by the commission and ultimately the City Council.

Further stoking controversy surrounding the regulations is the rules’ potential to affect projects both in the pipeline and currently underway.

In January, the city’s Department of Buildings revoked a permit for a 775 ft. condo building on the Upper West Side claiming developer, Extell, was abusing mechanical voids in order to raise the height of its building for more sweeping views.

The decision comes as a reversal of a zoning challenge from politicians and preservationist groups in November when the city’s Department of Buildings rejected calls to stop the project located on 50 West 66th Street.

According to the city, the proposed revisions will be referred to community boards in Manhattan, the Bronx and Queens as well as their borough presidents and, after a 30-day review period, they will be referred back to City Planning Commission for final approval.