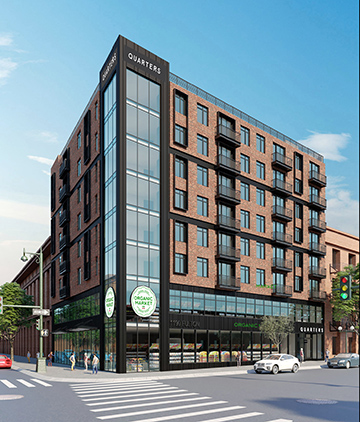 Co-living giant Quarters has announced plans for a new location in Brooklyn.

Located at 1190 Futon Street  in Bed-Stuy, the ground-up, eight-story building will break ground next month.

Purpose-built to Quarters specs by site owner and developer, Bawabeh Realty Holdings, the building will include 23,000 s/f of residential space for 84 units and common living areas, as well as 7,000 s/f for ground-floor retail.

“Bringing our co-living product to Brooklyn was a no-brainer,” said Gunther Schmidt, founder and CEO of Medici Living Group, parent company of Quarters.

“Young people – particularly those working in the tech and creative industries – want to be in Brooklyn, in an environment that engenders a vibrant community culture. At Quarters, our residents get that community culture, as well as deluxe amenities, at a price 10-20 percent more affordable than a standard studio in the same neighborhood. We think that combination of offerings is a compelling differential in the market.”

Quarters is the largest co-living provider in Europe and the US. It opened its first US location at 324 Grand Street on the Lower East Side in 2017, and a second in Chicago’s Fulton Market last year. It also operates a location at 29 East 5th Street in the East Village.

The announcement of the new Brooklyn location comes on the heels of Medici Living’s $300 million raise for the company’s expansion in the U.S. market and — $1.1 billion raise for the expansion of its European portfolio. The investments will facilitate the creation of 6,000 additional units to the European market over the next five years and 1,800 new units to the U.S. market over the next three years. The new locations will be a combination of retrofits and new constructions in metropolitan areas with populations greater than one million and a “sophisticated” tech presence.