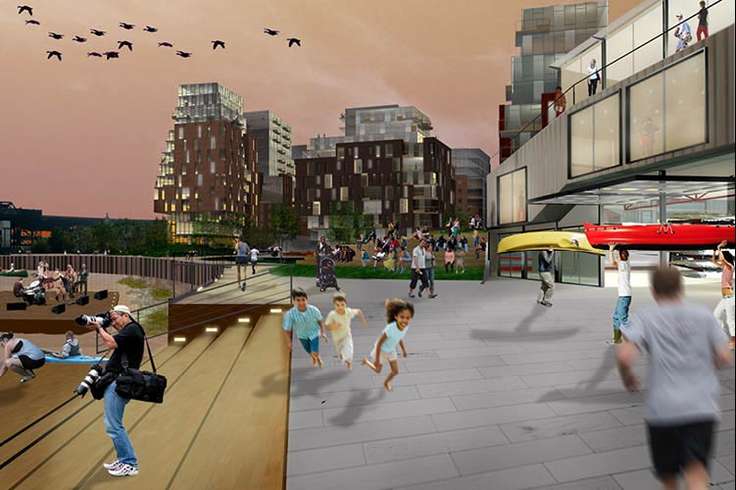 City lays groundwork for developers ahead of Gowanus rezoning

The city has unveiled a new set of policies aimed at making sure developers looking to build in Gowanus chip in for improvements to schools, subways and flood prevention.

Released under the Department of City Planning’s (DCP) Gowanus Neighborhood Plan, the policies aim to make sure the neighborhood can cope with a re-zoning that it is estimated could bring over 8,000 new apartments to the area.

“As we seek a just and durable economic recovery from the COVID-19 crisis, the Gowanus Neighborhood Rezoning offers us an opportunity to build a more affordable, integrated, vibrant and sustainable community than the one we have today,” said NYC Council Member Brad Lander.

“But growth must come with the infrastructure needed to sustain it – for new families and businesses, and for those of us who live and work here today.”

DCP Director Marisa Lago said the city has been working with Gowanus residents, leaders and businesses, and alongside other city agencies, to come up with solutions to many of this community’s most pressing concerns.

“With these new policies, Gowanus will be a cleaner, greener and more equitable neighborhood – for its current residents and for generations to come,” added Lago.

The three new policies are:

SCHOOLS – The Gowanus Neighborhood Plan would map a Gowanus special district with zoning rules that encourage the inclusion of public schools as part of new mixed-use residential buildings if seats are needed, as determined by the School Construction Authority. New tools will provide incentives for developers to include district schools in new construction. Throughout the rezoning area, the City would cover the cost of the school itself, while the developer provides the space within their building.

STORMWATER MANAGEMENT – DEP is developing a new citywide rule for on-site stormwater management for new buildings that will reduce stormwater runoff from future development properties. Even after creating an estimated 8,000 new homes, 3,000 of them affordable, the updated rule means new development could result in an approximately 5% (about five million gallons) reduction in CSO volumes per year when compared to a future without new development around the Gowanus Canal. This further bolsters the investments already being made in and around the neighborhood to keep the Canal cleaner and healthier.

TRANSIT BONUS – In addition to the previously announced transit easement zones, the Gowanus Neighborhood Plan would now also include a zoning incentive for developers to build new subway station improvements, such as wider stairs and ADA accessible elevators. In exchange for funding and constructing significantly improved access, including elevators at subway stations along 4th Avenue, zoning would allow new developments additional floor area of up to 20%. Identified in coordination with the Metropolitan Transportation Authority (MTA) and their planned program of accessibility improvements, the stations are: Atlantic Avenue, Union Street and 4th Avenue/9th Street, all on the R line, though the latter station is also on the F and G lines. This zoning incentive will increase accessibility to transit for disabled and elderly riders, parents and others. It will also support the neighborhood as additional people use the subway to reach new businesses and homes, and will help Gowanus become a more transit-oriented and energy-efficient neighborhood.

The City recently announced that the Gowanus Green project, located on city-owned land, will be 100 percent affordable and include a new school.

That development is viewed as the anchor for the rezoned Gowanus that is expected to trigger the building boom.

The proposed rezoning is part the de Blasio administration’s housing plan to create and preserve 300,000 affordable housing units, partly through rezoning up to 15 neighborhoods across the city to make them denser.

The Gowanus rezoning is expected to be the largest apartment producer of all the administration’s neighborhood plans.

The city has announced that the Gowanus neighborhood rezoning process will get underway in January 2021.