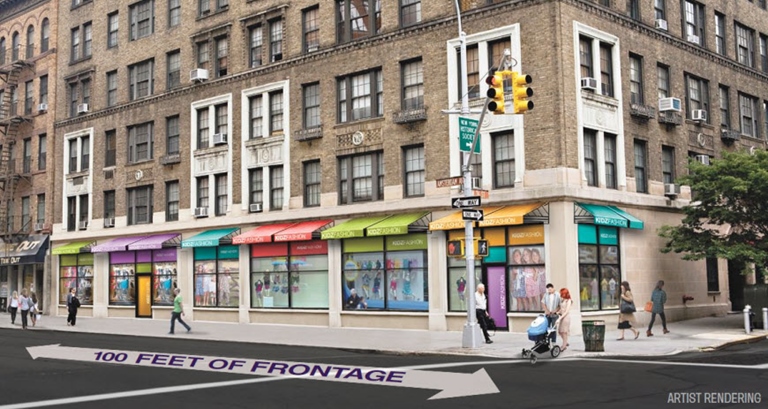 Two retail spaces on Amsterdam Avenue on the Upper West Side are up for grabs, and leasing agents are looking for the perfect fit for the family-friendly and health-conscious area.

Ross Kaplan and Stu Morden with Newmark Grubb Knight Frank Retail are the exclusive leasing agents for the two spaces at 341-345 Amsterdam Avenue, a residential building on the corner of 76th Street and Amsterdam that contains three retail storefronts. The third retail space was recently taken by salad chain Chop’t, which signed a lease for the 2,500 s/f space last week. Asking rents were $175 psf for that space, but not for the remaining two spots, according to NGKF.

“This is sort of a prime Upper West Side location, a lot of families around, PS 87 is around there corner, there’s the JCC,” said Kaplan. “It’s a neighborhood spot, so we’re targeting children’s clothing (retailers) or maybe not a Lululemon, but something like that.”

Related’s luxury condo building The Harrison is across the street from the retail spaces, as well as Pure Yoga, high-profile gym chain Equinox, Soul Cycle and Giggle, a children’s clothing store. The spaces are four blocks from the 72nd Street subway station, and there are five schools within a three-block radius.

“It’s has gotten a lot of interest,” said Kaplan of the spaces. “It’s out there that Chop’t has signed there, so that’s given us attention to the space.”