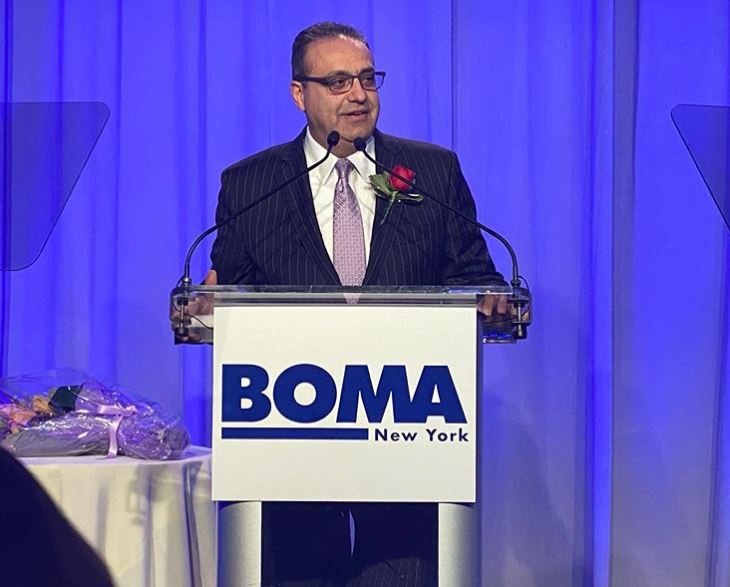 There were no losers at last night’s BOMA-NY Pinnacle Awards as the organization’s chairman Hani Salama paid tribute to all of the men and women who help make New York City’s skyline remarkable.

“It is a privilege to recognize the most distinguished and creative leaders and innovators shaping our city,” Salama told a record crowd of 960 during the gala event held at Chelsea Piers.

“The Pinnacle Awards emphasize the highest standards while propelling innovation and growth within New York’s commercial real estate industry. We are redefining office and residential space with dynamic new designs and technologies and I congratulate all of you on being nominated for this prestigious award.”

Hinting at the challenges ahead as the city moves to green the city under its New Green Deal that dramatically cuts carbon emissions from buildings, Salama said, “I am confident our local thought leaders will continue to deliver solutions and demonstrate excellence in the CRE industry.”

The overhaul included the construction of The Bankers Club, a 20,000 s/f space on the 40th floor that includes an indoor lounge, cafe, food hall and outdoor roof deck for tenants.


The Grand Pinnacle is the highlight of the annual awards hosted by the Building Owners & Managers Association of Greater New York (BOMA) to celebrate the cityʼs best run office buildings and the people who operate them.

Management teams from properties throughout the city were recognized in 11 different categories for what is the New York round of the BOMA International TOBY (The Outstanding Building of the Year) competition.

Considered one of the most difficult industry recognitions to earn, winners qualify to compete at the Mid-Atlantic awards and then the BOMA International TOBY competition. The Grand Pinnacle is the winner with the highest overall score across all categories.

Earlier in the night, the Silverstein Properties team had collected the Historical Building of the Year award for 120 Broadway, beating out competition from SL Green’s 110 East 42nd Street.

But the REIT didn’t leave empty handed, collecting the Earth Award for 485 Lexington, the one-time TIAA-CREF headquarters SL Green has transformed into a future-ready masterpiece hailed as the perfect example of how to “successfully retrofit existing building systems to optimize building sustainability.”


Brookfield Properties won the New Construction award for 1 Manhattan West, and awards newcomer, Marx Realty, picked up the Renovated Building of the Year for its work on 10 Grand Central.

The Henry J. Muller Award that celebrates building vision went to Related Companies and Oxford Properties for Hudson Yards, hailed as an engineering marvel that created a new 28-acre neighborhood over an active rail yard on the west side of Manhattan.

Summing up the night’s celebration, master of ceremonies Tom Kroll said work was already underway to prepare New York’s buildings to meet the challenges of Pinnacle accreditation in 2021 and promised big changes in the gala format: “If Bernie Sanders wins the election, the gala will be free for everyone. If Mike Bloomberg wins, there will be no salt or soda on the tables,” he joked.

See below for some of the night’s highlights in pictures …

Canal conservationists move to Can Factory