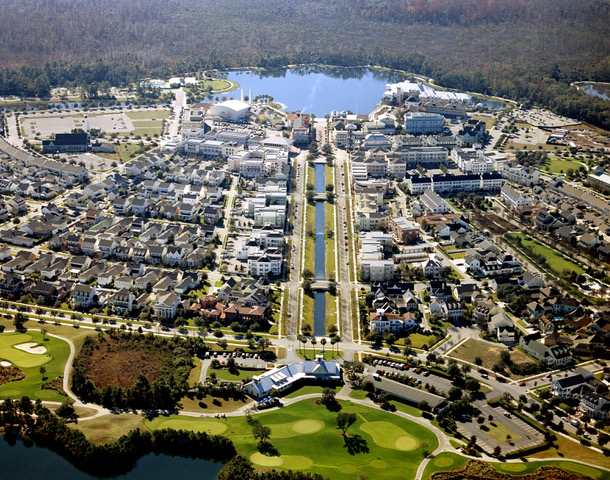 Cooper Robertson co-founder Jaquelin “Jaque” Taylor Robertson, FAIA, a prominent U.S. architect and proponent of urban design, died on Saturday, May 9, 2020, at the age of 87.

Mr Robertson died from complications of Alzheimer’s Disease and passed away at his home in East Hampton, New York.

He was well known for his work creating private residences as well as planning large-scale projects including the town of Celebration, Florida (pictured top).

The following statement was released by Cooper Robertson, the architecture and urban design firm where Robertson served as founding partner:

It is with heavy hearts that we mark the passing of our partner, colleague, mentor and friend, Jaquelin ‘Jaque’ Taylor Robertson, FAIA.

Jaque joined forces with his longtime friend and former Yale classmate, Alexander Cooper in 1988. Along with David McGregor and Brian Shea, they formed the four formidable pillars of what would become Cooper, Robertson & Partners, and laid the foundation for an office-wide culture of open dialogue and collaboration, the firm’s hallmark, that lives on to this day.

Over the course of his long, fruitful and rich life, Jaque’s accomplishments were innumerable, extraordinary and widely varied. He had a staggering breadth of life experiences and a seemingly bottomless well of talents; always setting the bar high, holding to the highest of standards and accepting nothing short of excellence, first in himself, and in his partners and colleagues as well.

The Jaque we remember is that of a tall, dashingly handsome figure, in custom tailored suits from London, matching bow tie and pocket-square, with a winning smile and a twinkle in his electric blue eyes; a mirror to a soul that was fundamentally warm, loving and ever-curious about people and the world. Jaque was a lover of opera, classical music, books, sports and animals – and obsessed with urbanism, architecture and design.

Jaque mentored, and instilled certain values in, dozens of young architects over his career – many of whom are still with Cooper, Robertson, and many others who are practicing elsewhere across the globe. That is, perhaps, his greatest gift to the profession and the culture; perhaps his greatest legacy. We will miss him. He will be roundly missed, and never forgotten.”

Jaquelin Robertson is survived by his wife of 58 years, Anya Sohn Robertson, as well as his sister, Catherine “Kitty” Robertson Claiborne of Virginia.