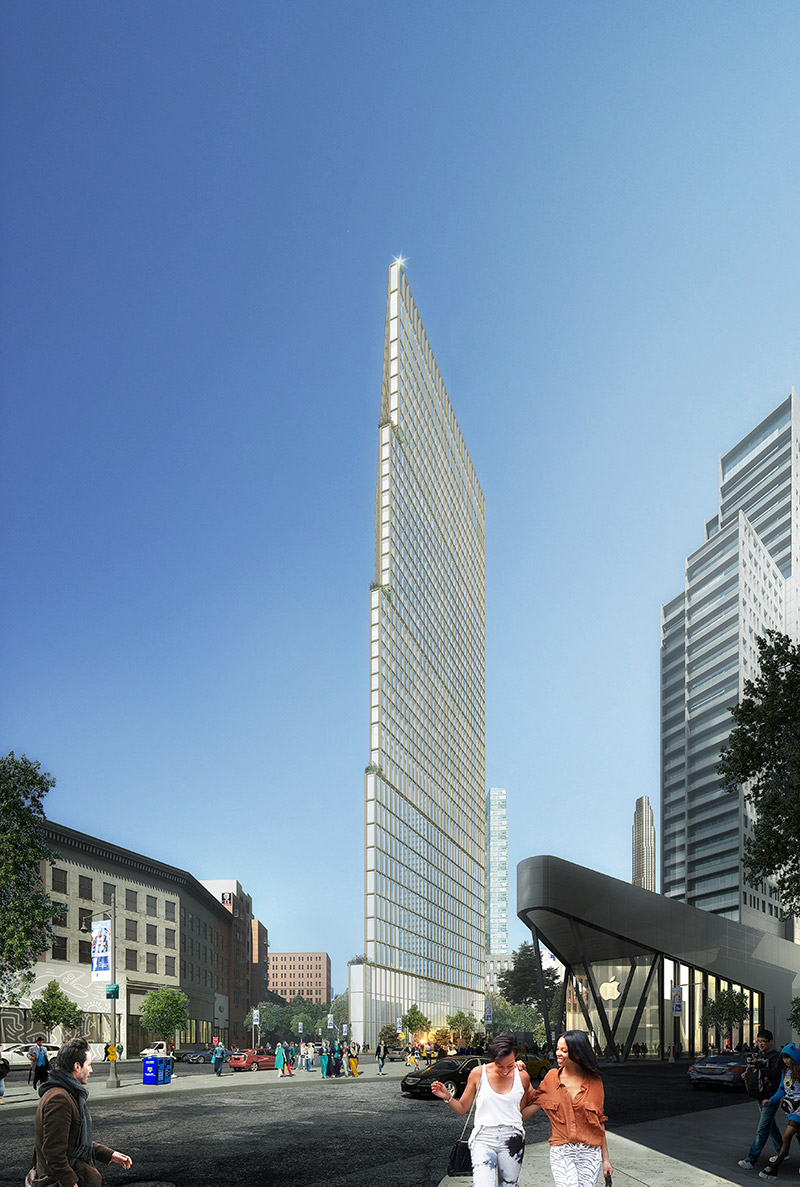 They highlighted Alloy Development’s 44-story 100 Flatbush Avenue project (rendering top) as well as over 70 other fossil free projects in New York City to urge Speaker Corey Johnson and the Council to pass Intro 2317, a gas ban in new construction and gut renovations.

The group said Hurricane Ida’s lethal flooding shows the urgency and necessity of New York City immediately banning gas in new construction and gut renovations. The 100 Flatbush Avenue project and other fossil-free projects already built or in construction in New York City demonstrate that moving from gas to all-electric is practical and cost effective for developers.

Councilmember Alicka Ampry-Samuel, sponsor of Intro 2317, said, “The 41st council district, which I represent, encompasses Brownsville, Ocean Hill, and parts of East Flatbush, Bedford Stuyvesant and Crown Heights. We have been consistently and systematically left out of climate change conversations and initiatives although we are the part of the city that feels the negative effects the most. For that reason, I am proud to lead this charge. I look forward to working with all stakeholders to ensure that we turn a corner towards a healthier future without putting duress on the hardworking homeowners and small business owners in my district and in the city.”

Buildings generate about 70 percent of NYC’s climate-heating pollution. Other major cities such as San Jose, Oakland, Sacramento, and Seattle have already passed gas ban legislation, which reduces the burning of fossil fuels that are the main driver of climate change and catastrophic climate events.

“Hurricane Ida issued just the latest harsh reminder that we need action now on climate change, and it’s important for the real estate industry to be part of that fight in New York City,” said AJ Pires, President of Alloy Development. “We were proud to stand with fellow advocates today at the site of 100 Flatbush, which will be the city’s first all-electric residential tower. Our industry needs to lead by example as we grapple with the greatest issue of our time.”

“Architects know that with current technology and the broader adoption of sustainable design practices, we can design and build buildings that are fossil fuel free,” said Ben Prosky, Executive Director of the American Institute of Architects New York. “100 Flatbush Ave and other buildings demonstrate that building fossil free is achievable and affordable right here in New York City. If we want to mitigate climate change, provide New Yorkers with a more reliable source of power, develop the clean energy industry, and prevent future gas leaks and explosions, the City Council must pass Intro 2317”

Passage of Int 2317 would reduce air pollution from fossil fuels, which kills over 1,000 New Yorkers each year, especially in low income communities of color. COVID deaths are also higher as a result of fossil fuel pollution. Asthma and other respiratory diseases are also worsened by air pollution.