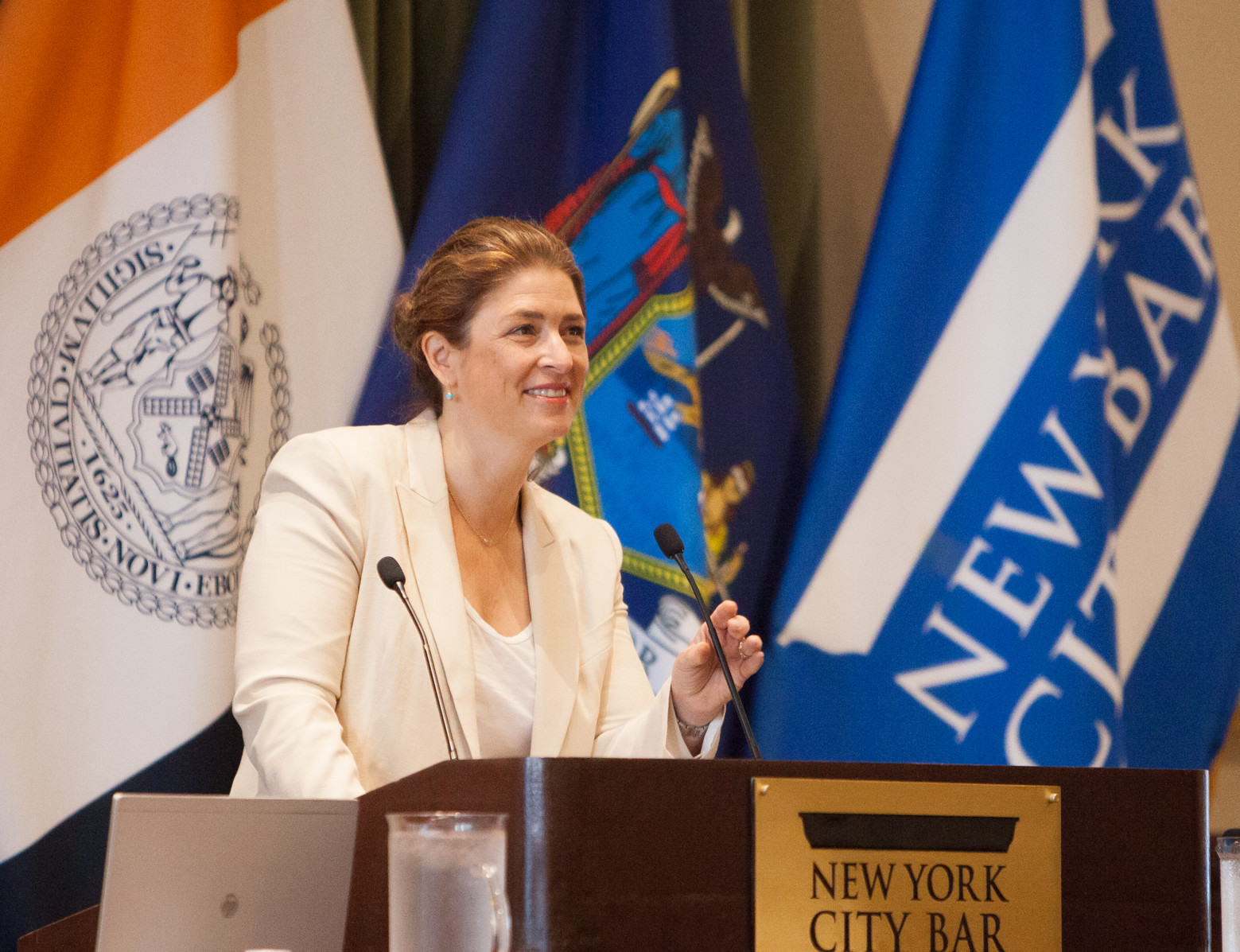 “Being an ambitious woman in this town means taking punches, and quite frankly, throwing them. It means that after every time you fail or succeed, you don’t get to rest on your laurels,” said Deputy Mayor Alicia Glen during her keynote speech at the event held at the New York City Bar Association in midtown.

The woman in charge of implementing Mayor Bill de Blasio’s housing and development programs has been the target of a co-ordinated protest campaign against her approach to building homes for the city’s most needy.

A small band of placard-wavers from the Brooklyn Anti-Gentrification Network chanted their outrage on the steps of the Bar Building ahead of her arrival at the Women’s Forum.

But Glen told the crowd inside she’d grown a thick skin since taking the city job.

“You can have people out front holding pictures of you,  chanting that you’re the world’s worst person when all you’re trying to do is make the city better,” she said, telling the men and women in the audience she could either sit around and mope about it, or get on with her job.

That job has her at the helm of the most ambitious affordable housing effort the city has seen since the Koch administration, creating some 200,000 units over the next 10 years. Glen acknowledged Women’s Forum alumna MaryAnne Gilmartin, president and CEO of Forest City Ratner Companies, noting she was with the developer on Monday for the opening of 535 Carlton in Brooklyn, the first 100 percent affordable building at the Pacific Park development.

Other women in the sector she cited for “getting things done” included Amy Peterson, in charge of the Build it Back program to rebuild storm-damaged homes.  “ She takes a lot of guff. But in just the past six months, she’s completed construction on 1,400 of those homes. 1,400 individual construction projects complete, each one with utilities, contractors, subcontractors, developers, multiple agencies,” Glen said bluntly.

“ This is what women do—we take something broken, we tune out the drama, we put our heads down, and we get the job done.”

Glen credited HPD Commissioner Maria Torres-Springer and  her predecessor Vicki Been for getting over  63,000 affordable apartments financed to date; Shola Olatoye for transforming the nation’s biggest public housing authority and; Marisa Lago who got unanimous approval last week for the rezoning of East Midtown.

“This is New York, the world capital of commerce, culture and innovation.  Where we are tackling the biggest challenges of our time, and no matter where you look—not just our housing and land use, but our schools, our transportation, even our trash collection—you have women in positions of authority, running the nuts and bolts of government, and with a platform to make real institutional change,” said Glen.

Taking a swipe at the Trump administration and the President’s  male-dominated cabinet, Glen said , “This is where the rubber meets the road in national policy, and we don’t have our hands on the wheel.”

But she said that the game-changing strides of the city’s most powerful women would pay off “ when the pendulum swings back in our direction.

“When we force it in the other direction, policies like those are going to be part of a new national template for a pro-women agenda.

Volunteers of America looking to grow on West 50th