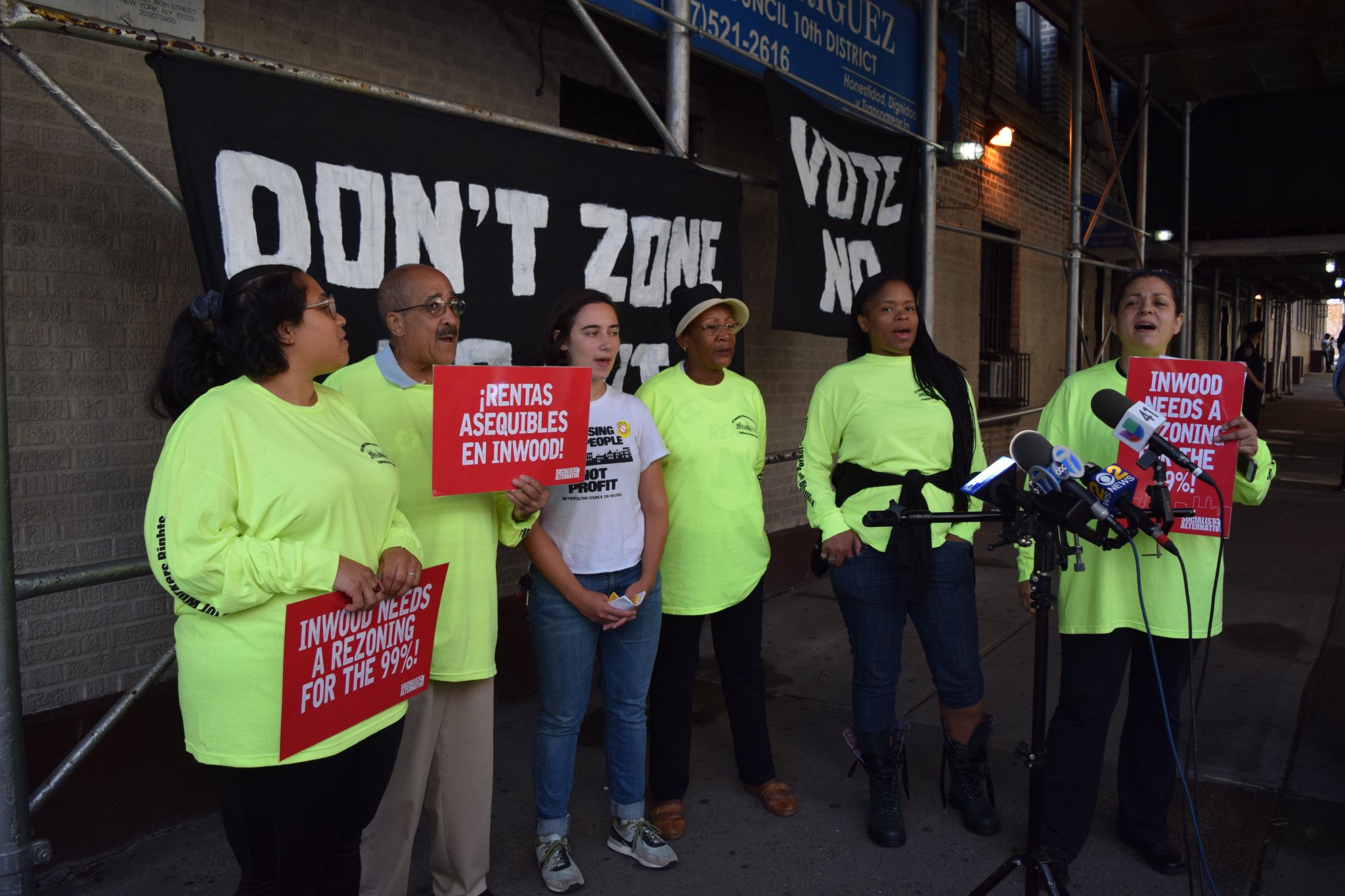 Supporters say it will create a fairer, more affordable community. Opponents call it entrenched racism that “privileges the priorities of developers.”

And with the New York Court of Appeals decision on Monday not to hear advocates’ case against the Inwood Rezoning, the acrimony is unlikely to dissipate as both sides dig in for the long haul.

Cheryl Pahaham, co-chair of Inwood Legal Action, the group which brought the appeal, said: “We have been building and continuing to develop a Federal Fair Housing lawsuit against the City of New York and organizing with other communities to join us in that effort.

“Inwood Legal Action will keep fighting for reforms that give New Yorkers community-based planning, housing, and land use policies that we deserve.”

“We will preserve and build thousands of affordable apartments and see millions of dollars in investments for our community. As Councilmember for Northern Manhattan, I will continue to work alongside all stakeholders to bring this vision to fruition.”

The plan – which was first approved by the City Council in 2018 – will extend residential Inwood eastward across 10th Avenue to the Harlem River, transforming land currently zoned for manufacturing as well as 10 acres of parking lots into homes and public open space.

It will create 1,600 affordable homes, according to the city, and preserve 2,500 more while creating new waterfront parks and open space. There will be a new state-of-the-art Inwood Library with a Pre-K for All facility, a youth STEM education center focused on robotics, and a cultural and job training center.

$50 million will be invested in “local school infrastructure and expanded programming in science, technology, engineering, and math,” and an Immigrant Research Center and Performing Arts space will “celebrate the contributions of generations of immigrants to the rich history and culture of Northern Manhattan.”

The rezoning will also encourage affordable retail, according to the EDC, by requiring long-term leases with limited rent increases in City-financed development projects.

“This is good news for Inwood and for the entire City,” said James Whelan, president of the Real Estate Board of New York of the Appeals Court decision that will allow the re-zoning to proceed.

But Inwood Legal Action criticized the court for declining to offer an explanation for its refusal to hear the appeal and vowed to continue its fight.

The city said it engaged more than 2,500 residents and local stakeholders in planning for the long-term future of Inwood and creating a set of strategies and actions to achieve community-identified priorities and the State Supreme Court’s Appellate Division for the First Department overturned the lower-court ruling, reinstating the rezoning.

Inwood Legal Action (ILA) is now demanding that New York City cease and desist in its refusal to examine the impacts of its large rezonings on its Asian, Black, Latinx, and Native residents.

Citing research from the Pratt Institute that shows targeted rezonings have displaced tens of thousands of working people of color in the wake of market rate luxury development, ILA’s Pahaham said, “This decision makes our fight to enact a racial impact study mandate even more urgent, as it will compel our policymakers to see what they have been ignoring for decades – that these rezonings do have  racially disparate impact, and that they harm Asian, Black, Latinx, and Native City residents.”

Last month, the Thriving Communities Coalition of community and advocacy groups kicked off a new campaign to transform New York City’s approach to land use and planning.

Emily Goldstein, director of Organizing & Advocacy, Association of Neighborhood and Housing Development, said, “We cannot afford to continue the status quo approach to planning, which consistently reinforces a geography of ever-deepening racial and economic inequality.

“We believe the Thriving Communities Coalition platform will advance the systemic changes to New York’s land use and budgeting processes that are needed to build an equitable future for our City.”