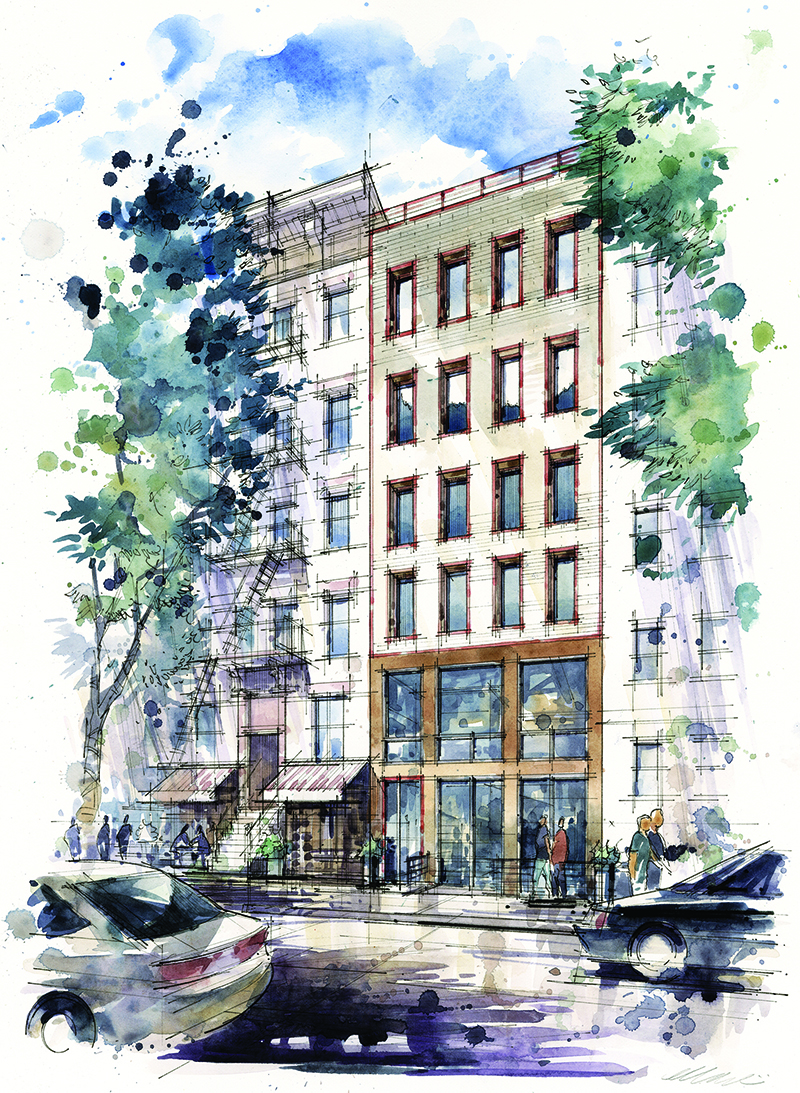 You should be in pictures: Developers turning to illustrators to showcase properties

With the residential sales market in New York struggling from declining overseas interest and a multitude of political factors, owners and their brokers marketing higher-end properties have had to get creative about standing out from the rest of the gleaming and amenity-laden pack.

And some are choosing old-fashioned illustration as a marketing tool.

Traditionally, the promotional images shown to potential buyers, especially when a property is still in development, are polished looking renderings. For existing properties, there are slick brochures packed with photos of the interiors and outdoor space. And while this is still very much the norm, a handful of owners and their agents have begun utilizing more traditional art and illustration to attract a buyer’s eye.

Recently, developer Lightstone commissioned an illustrator called Kneeslappa to create a a drawing of Lightstone’s 130 William in the Financial District. The drawing process was made into a video that was posted on social media to celebrate the building’s 10,000th Instagram follower. Illustrator Josiah Hanchett was also recently tapped for a similar project to sketch the views from L&M Development Partners’ and the family behind J&R Music’s 25 Park Row in Lower Manhattan as they’d appear from a penthouse once it’s completed. Additionally, a four-unit luxury building owned by Grid Group, 246 West 16th Street in Chelsea, will soon launch sales using watercolor illustrations of the property’s façade and interiors by artist and interior design professor Peili Wang.

That said, no one should mistake the interest of the aforementioned developers as a trend.

Wang, who has illustrated professionally for 20 years and taught design and illustration for nearly that long, has always seen a steady amount of interest from real estate professionals. But never a sudden spike that might indicate a fad, even as commercial illustration has made a comeback in recent years. He believes it’s just a matter of preference, and during this time, Wang been called on to create plenty of computer-generated renderings as well as what he refers to as “freehand” versions with watercolor. He recently did one for the Library of Congress in promotion of a massive renovation project announced last spring.

What Wang has seen however is that watercolors are requested far more for residential properties than for commercial ones.

“Residential projects are special; they’re interested in traditional,” he said.

As for Wang’s work for the new Chelsea development, one of the brokers representing the property, Doug Bowen of Douglas Elliman, concurred that illustration isn’t particularly on the rise but Bowen is already a believer in it, having always incorporated art in some form when promoting his listings.

For over a decade, he’s organized or helped put together art exhibitions at homes and spaces he’s shown and has found doing so to be consistently effective. He and his team have also had art made by artists who are local to properties they’re marketing blown up and displayed on wheatpaste on construction walls. Additionally, as an art lover and avid collector himself, Bowen finds it important to make sure homes he’s selling come properly move-in ready with lighting that would highlight art on the walls.

“I believe art is extremely important in real estate,” said Bowen. “We’re selling a lifestyle when we’re selling a property like 246.”

Although it’s impossible to pinpoint exactly how many sales, potentially interested buyers or listing clicks have been triggered by a particular marketing campaign, Bowen said he wouldn’t be surprised if traditional illustration takes off in the industry based on the positive feedback he’s gotten from it so far.

“I think people are appreciative of thoughtful approaches to marketing,” he said. “I still do traditional mailers, but how do you make the mailer different from the next mailer and not get thrown into the pile that gets thrown into the garbage?”

This is of course the big question P.R. professionals ask themselves every day. Alex Corda, the managing director of the P.R. firm who’s involved in the marketing of 246 and the other aforementioned developments, Optimist Consulting, said ultimately it boils down to staying away from the hard sell.

While social media engagement is hugely important for properties and agents, Corda cautions the real estate professionals he represents to avoid trying to sell directly on their properties’ accounts and stick to making updates that will make buyers and agents want to revisit the accounts. For celebratory moments, like hitting sales goals, illustration and in particular their progress videos, have been a kind of content he’s encouraged. And these days, it’s easy to find artists and other content creators who have an interest in real estate and architecture because they post about it. Once they’re found, Corda said he’ll ask them to create something that would “tell our story in a different manner.

“We need to continuously find ways to spark conversation,” he added. “I don’t send people to (a property’s) website because it’s updated once or twice in its development, but I send them to Instagram because it’s fun and it has neighborhood tips and it’s a playful way to talk about a building as it’s being built.”

In the case of 130 William, which was illustrated as it appeared nestled in the skyline, the goal was to depict a property that the owners envision as becoming a landmark. In the case of 25 Park, it was to give a sense of the future experience of the unfinished apartment through its views.

Not surprisingly, Corda said, the illustration posts are a lot more work than a typical social media update. The 130 William video was done after scouting many spots before finding the best perspective with which to capture the building. So he suspects even if building illustration gets more popular, it’ll mainly be to highlight milestone moments.

Meanwhile, some New York City properties currently under development have also been getting a boost in branding from a local artist whose work has made her a darling of the construction industry.

For years now, Gwyneth Leech’s colorful paintings in acrylic and oils have depicted major Manhattan properties as they’re being built from the ground up, from the Hudson Yards shed to One Vanderbilt to the MoMA Expansion Tower.

Ironically, Leech created her first building painting as a form of personal protest when a skyscraper began to rise up across the street from her Garment District studio, obstructing her light and views. Dubbing it “The Monolith,” her painting process ended up being immortalized in an award-winning documentary of the same name. It was then that Leech found that she enjoyed painting real estate or more specifically the process of it being created. She soon found herself in the street with an easel, using brushstrokes to chronicle the construction process at different sites. She especially liked capturing buildings in their “skeletal” steel beam phase.

When showing some of these works at an exhibition, a friend mentioned he knew someone who’d appreciate the subject matter and that person turned out to be the president of a construction company who collected art. He later invited Leech to hold an exhibition in his office, and through that connection, Leech also met an art buyer for Brookfield. Over time she was approached by other real estate professionals, in particular those involved in construction and steel contractors, who were looking to memorialize their own work.

“It was a very organic kind of thing, word of mouth and posting my art on Instagram,” said Leech.

In recent weeks, her painted properties were also on view on the streets of New York City as they glowed from the sides of LinkNYC kiosks. This was after having pieces she submitted get accepted for a public art program run by the public Wi-Fi service. She also had a recent exhibition, done in collaboration with Clinton Housing Development Company, a nonprofit aimed at creating more affordable housing in the Hell’s Kitchen area.

While most of her works are buildings she chooses to paint, she does take commissions and if an owner or broker wanted her to create a specific property, Leech said she’d consider it.

However, she noted, “It would depend on the project and whether it’s in my area of interest.”

She recently turned down an offer to paint a hotel after learning construction had already finished.
“I said ‘no, I can’t really help you.’ My work is definitely about the process.”