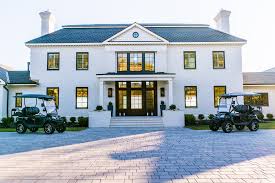 An estate in Williamsburg, Virginia that was originally built as a mansion for the Busch family (of Budweiser Beer and Busch Gardens) is now on the rental market following a $3 million renovation.

This location on the James River is also the historic landscape first seen by British settlers in 1607, and where Pocahontas once walked.
Starting in 2020, the estate will be available to rent for $1 million a year. Usually rents for about $5,000 to $6,000 a night (it sleeps eight). But the longterm lease will also come with access to two luxury Denali SUVs and two luxury golf carts. There is also 24/7 concierge service and a private chef from Monday through Friday and a $50,000 per person food and beverage credit at Kingsmill Resort.

The 7,000-s/f four-bedroom residence estate also boasts views of the James River and Jamestown Island, from the infinity pool and outdoor deck of the property.
Lisa Wandrey, Estate Sales Manager, Kingsmill, is handling this listing.

Screenwriter Chiswell “Chum” Langhorne, who wrote the 2002 horror film “Reality Check,” has just listed his SoHo pad for $4,300,000. The four-bedroom, 4.5-bathhome is located at 330 Spring Street, 3B, otherwise known as The Urban Glass House and features 2,309 s/f of open living space. Langhorne, who has lived there since 2006, is an avid art collector and has turned his library into its own art installation.

Chase Landow, Jonathan Perrelli and Noble Black of Douglas Elliman have the listing.

Never before seen celebrity photos were put on display last Thursday as part of the festivities for a Greenwich Village townhouse opening by Halstead’s Richard Orenstein, a broker who partnered with photographer Michael Weinstein at the event.

Many of the photographs are from his earlier days as a rock and roll photographer, a career that has spanned over 40 years and has evolved into his becoming well known for his imagery of high-end properties.
The home, 31 Perry Street, is a nearly 9,000 s/f, 25-foot-wide townhouse built in 1901 as a stable. It later became home to the Perry Street Theater.
It’s priced at $17,500,000 and Orenstein has the exclusive listing.