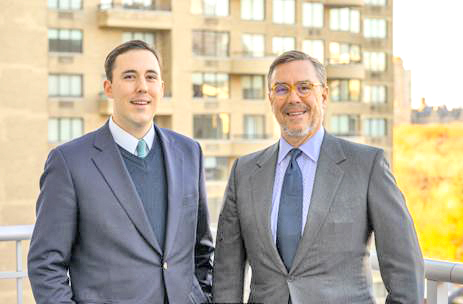 There are many family dynasties within the New York real estate world, but few can say it was the kid who roped the parent into the business. However, Will Kerr is one of those kids who convinced his father, Woody, to join him in his home-selling efforts.

Will jumped into the real estate world immediately after graduating from Hamilton College in 2012. While he worked on the Eloise Johnson team at Halstead Real Estate, his father was an executive vice president at the Bank of New York Mellon.

Will absorbed as much as he could from one of Halstead’s top teams as his dad was nearing his retirement from the banking world.

Woody was always generally interested in his son’s career and, eventually, Will asked him if he would like to join him.

“It’s an interesting relationship because most of the time you have the situation where the child joins the parent,” Woody said. “Here you have the adult joining the child.”

After Woody’s retirement and commitment to working with his son in real estate, they created the Kerr Team with Halstead Real Estate in 2015. In January, they joined Corcoran.

Despite having no professional experience in real estate, it wasn’t a particularly difficult transition for Woody. He said he was already a very client-focused executive which translated well to real estate brokering that focused on creating lasting relationships with clients.

The only stark difference, he noted, was essentially being a contractor for real estate companies whereas he had worked in a large corporate environment for more than three decades.

“I like working with people and I’ve always loved real estate and been involved in real estate transactions for ourselves and our family,” Woody said. “In certain respects, it was a very easy transition, but very different.”

But Woody also had his son and his several years of real estate experience to learn from.

“From a practical standpoint in the real estate business, it was an interesting role reversal to be able to educate him on some business-related things,” Will said. “Conversely, I get to learn a lot from my family every day and [Woody] brings a lot to the table with his background.”

The duo has refined their contrasting backgrounds and now offer a strong multi-generational dynamic. While they’re both very familiar with the Upper East Side where the family grew, Will offers more familiarity with up-and-coming neighborhoods popular with a younger demographic while

“We like to think of it as a millennial-baby boomer synergy that works really well for our clients,” Woody said. “The father son dynamic is always there, but when it comes to business we work well together because we each have complimentary skills and strengths.”

Their dynamic has proven strong in the city so far. They’ve recently closed multiple deals on the Upper East and West Sides, while also covering areas exploding in popularity, like DUMBO and Midtown West.

Their most memorable deal to date was reflective of how their backgrounds mesh so well, Woody said.

In 2017, the Kerrs ran into what may be the most meaningful deal of their career so far. The family of Depression-era actress Greta Garbo was looking to sell the apartment where the Swedish-American star once lived in the Campanile at 450 East 52nd Street.

By chance, Woody was a former classmate with Garbo’s nephew and Will was college roommates with the nephew’s son, so they put their names in the hat for the chance to broker the high-end sale.

The Kerrs won out over a number of brokers and set an asking price of $5.95 million. Will said that they set up a compelling marketing package but also benefitted from the international media attention that the listing generated.

“We had the Garbo name and the worldwide media focus with film crews coming up from Brazil, Swedish public radio and hundreds of articles that were picked up,” Woody said. “We knew that it was going to generate a lot of interest, but that level of interest far exceeded what we expected.”

The apartment eventually sold for f $8.5 million, a 43 percent premium on their listing price.

But their deals extend past high-return celebrity listings. Woody explained that they emphasize developing relationships with their clients and letting them take the lead for any future deals.

“Our approach is that we’re very much in a relationship business, not a transactional one,” Woody said. “We’re building relationships and those relationships with clients take us wherever they want to go.”

With their recent move to Corcoran, they feel there’s many more opportunities for the father-son duo in the coming future.

“In certain respects, we’re just co-workers and we sit next to each other,” Woody said. “But put it this way, we’re still working together after four years because we make it work and work well.”