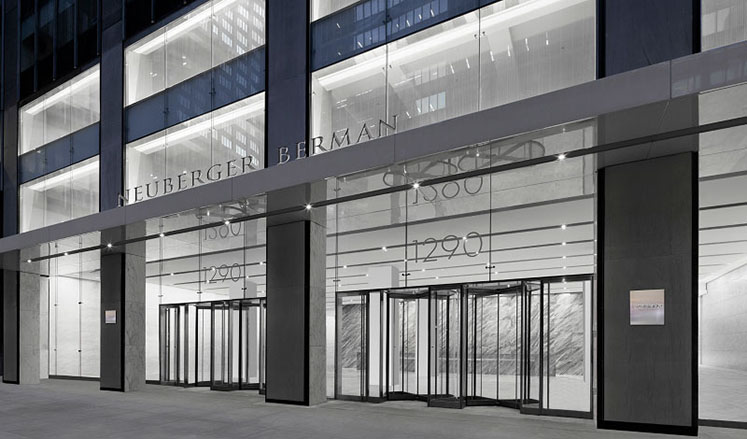 Global investment management firm Neuberger Berman has just eaten up a 350,000 s/f chunk of vacancy at Vornado’s 1290 Avenue of the Americas.

“Vornado is delighted to welcome Neuberger Berman to 1290 Avenue of the Americas, our 2.1 million square foot office building in the heart of corporate row on Avenue of the Americas,” said Steven Roth, chairman and chief executive officer.  “Our business is to supply great space to great tenants. We have known Neuberger Berman a long time and they are best in class.”

The deal brings the 1961-built tower to 100 percent occupancy following departures  by law firm Morrison Forester – now an anchor at Boston Properties’ 250 West 55th – and Warner Music, which consolidated its worldwide headquarters operation to 300,000 s/f at Paramount’s 1633 Broadway.
The building – which Vornado already overhauled following the departure of Miscrosoft to 11 Times Square –  will get extensive new Neuberger Berman branding and a dedicated lobby visitor center.

Vornado recently completed a tower transformation that included a new lobby and infrastructure. The office building now has a state-of-the art conference center accessed by a dedicated client elevator.

The central midtown location is also appealing to a firm like Neuberger that hosts  more than 1,600 company management meetings every year in its New York office.

One of the world’s leading employee-controlled investment managers,  Neruberger been in its current location at 605 Third Avenue since 1992. With that lease expiring in 2017, the firm began researching its long-term options for its headquarters two years ago.

The firm’s CEO admitted it had several attractive options to chose from, but was swayed by the money and effort Vornado has put into modernizing 1290 6th, as well as the building’s central location.

“Neuberger Berman has a great and long-standing history in New York City and we are excited about this next chapter,” said George Walker, the chairman and chief executive officer. “In both location and capabilities, our offices in 16 countries reflect our commitment to our employees and our mission to serve clients.”

Vornado, one of the biggest office  landlords in the country, built a new lobby and renovated the plaza at the 43-story building, retaining  Moed de Armas & Shannon to direct the work.

Originally built in 1961, the building also saw a major overhaul of its technology to make it more appealing to today’s tenants.

The work appears to have paid off, with Vornado managing to attract a slew of big tenants since Microsoft announced its departure. Hachette Book Group leased 137,000 s/f last year and  State Street Capital took 100,000 s/f, absorbing most of the vacated Microsoft space.

When AXA Equitable dumped 400,000 s/f at 1290 onto the market for sublease last year, Vornado quickly found takers for that space, t00,  with Morgan Stanley signing on for a 148,421 s/f sublease . Sirius Satellite, Remy Cointreau and law firm  Zeichner Ellman & Krause between them sucked another 182,000 s/f off the market.

Studley in $260M merger with Savills