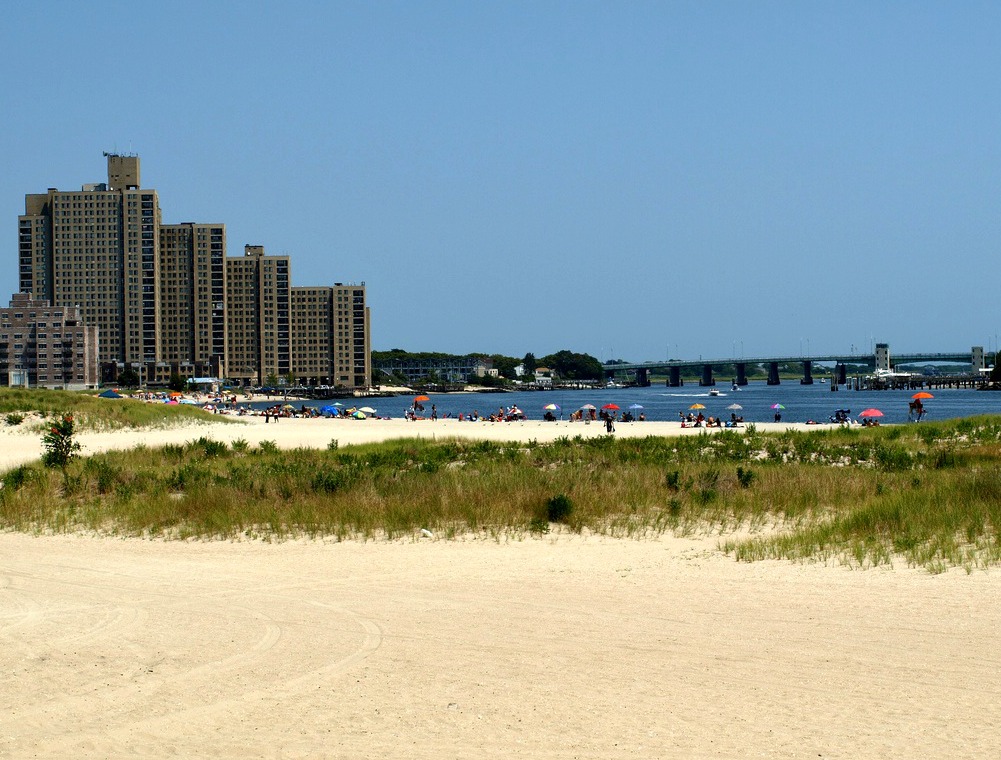 On a recent Friday morning, Eastern Consolidated broker Ronda Rogovin stood on a storm-ravaged beach beyond the final stop of New York’s most remote subway line, trying to make a case that the Rockaways are a great place to invest.

Her visitor, who had come to look at a 43-unit beachfront apartment building at Beach 119th Street listed for sale, skeptically glanced at the sand bags piled up for flood protection. A few stumps in the ground were all that was left of the famed Rockaway boardwalk.

“So you think the market will grow?” he asked.

“There’s nothing but upside,” Rogovin responded.

Brokers are prone to sugarcoat the markets they work in, but Rogovin had a point. Considering where the Rockaways had been a year ago, they have managed a remarkable turnaround.

Many of the horror stories New Yorkers remember from Hurricane Sandy took place in the Rockaways, a peninsula that houses 130,000 people in a potpourri of single-family homes and large apartment blocks.

On October 29, 2012, Sandy hit the Rockaways with 115-mph winds. Ocean water flooded the entire peninsula from the Atlantic on one side to the bay on the other, pushing boats into the streets and cars into the ocean.

When the water receded, it left behind an uninhabitable wasteland. Living rooms were damp and moldy, entire blocks were left without power for days and a fire had destroyed 111 homes.

Soon critics began to question whether the peninsula even had a future as a year-around residential neighborhood. With global warming raising ocean levels and worsening storms, wasn’t it best to just abandon the damaged homes and move elsewhere?

It turns out they weren’t. Since its mid-2013 low, the average price has climbed back to $625,000 in the West and $385,000 in the East, with year-over-year growth rates far exceeding every other neighborhood in Queens, including Long Island City and Astoria.

Government support has certainly played a big role in making the Rockaways livable again. Federal and state funds have helped owners rebuild their homes and are patching up streets and boardwalks.

But there are a number of other reasons why the Rockaways have bounced back so quickly and may have a bright future.

One is pricing. Upscale areas such as Belle Harbor offer large, suburban homes for a bargain compared to Greenwich or the Gold Coast.

One-bedroom apartments in the rent-protected, red-brick apartment building listed by Rogovin can be had for around $1,300 a month. Considering the Rockaways’ sprawling beaches and growing appeal as a surfer destination, units still seem to trade at a discount. Local developers and brokers are hoping that low prices combined with relatively swift access to the city will attract residents priced out of Manhattan or Brownstone Brooklyn and turn the Rockaways into the next suburban boomtown.

Another reason for optimism is space. The de Blasio administration’s push to build thousands of units of affordable housing is hamstrung by a lack of building lots in the city. But the Rockaways have plenty of it.

In Arverne East, 81 acres of land have been sitting vacant since 1969. Romy Goldman, head of Gold Development, is working on a development plan for the site. “If the City wants to reach 200,000 units of affordable housing, we need to use sites like this,” she said.

A partnership of L+M Development Partners, The Bluestone Organization and Triangle Equities were picked to develop on the public land in 2006, but the financial meltdown of 2008 and Hurricane Sandy stalled the project.

The developers recently revived the plan, and brought in Gold Development to run the day-to-day business.

A final plan currently being worked out will call for 1200-1500 residential units — single-family homes and multifamily buildings — as well as retail and community space. Goldman added that the developers are also looking to set up dunes as flood protection.

But before Arverne East can become a residential neighborhood it needs basic infrastructure, including streets. The developers say this could cost more than $100 million, which they hope will come from public coffers.

The development site lies in the east of the peninsula, which is dominated by low-income housing. Prices here have recovered far more slowly than in the more affluent West, were single-family homes can cost well above $1 million.

While average prices in the western neighborhoods of Breezy Point and Rockaway Park are almost back to their mid-2012 levels, homes in Arverne and Far Rockaway still cost about 15 percent less on average than before the storm.

A lack of infrastructure is just one of the many obstacles that may still stall the Rockaways’ recovery. Another is the state of retail, crucial to an area’s desirability.

“We don’t have a single Starbucks in the Rockaways — it’s bizarre,” said Krzysztof Sadlej, who heads the business improvement district Beach 116th Street Partnership. He explained that several stores in his district are still vacant, in part because owners have struggled to finance repairs. One store is burnt to the ground.

In order to attract new retail, the Partnership invited businesses to tour vacant storefronts on a Saturday last October. Sadlej said the event, which was co-sponsored by Pratt Area Community Council, Capital One Bank and MasterCard, was a success and he hopes similar events in the future will bring in new tenants.

Holding some businesses and families back is the worry that the next hurricane might wreak havoc again. “People are afraid. It’s still a difficult market,” said Donna Reardon, a Douglas Elliman broker who specializes in Queens.
Flood protection has been visibly improved and new buildings have to be raised to comply with strict FEMA standards, but home buyers are still justifiably wary of future floods. Another hurricane may well derail the Rockaways’ fragile recovery.

Eastern Consolidated’s Ronda Rogovin, for her part, believes that the skeptics are missing out. “Whenever people say ‘Ugh, the hurricane’, I tell them: When all the renovations are done in two years, you’ll be sorry not to have invested.” кредит