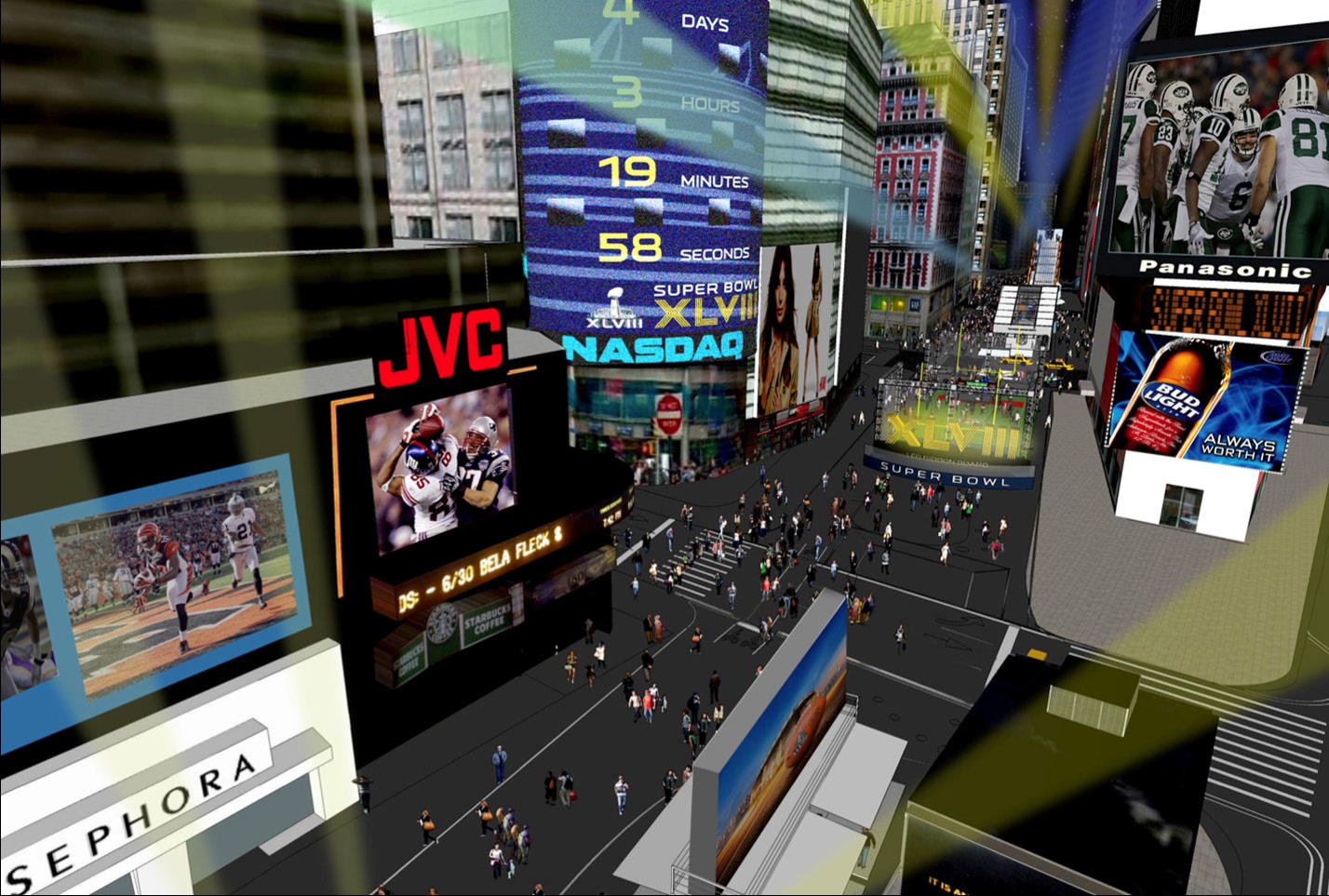 Having their street shut down for a week normally doesn’t make businesses happy. Unless, of course, it is shut down for the biggest sports event of the year.

The Super Bowl Boulevard, a football-themed pedestrian zone with activities such as a toboggan run and concert stage, has turned Broadway between 34th and 47th Street into a car-free zone until Sunday (February 2). West 41th Street between 6th and 7th Avenue is closed from today (Wednesday) until Saturday, between 9 a.m. and midnight.

The closures mean a large number of shops and offices will have to get mail and deliveries after hours, while having to deal with the expected noise and crowding around the Boulevard’s activities. And yet, most businesses seem happy about the event.

“We haven’t had a lot of complaints from tenants,” said Linda Lucerino, director of property management at EVO Real Estate Group, which manages the 400,000 s/f office building 1450 Broadway on the corner of 41st Street. The building is owned by The Zar Group.

Lucerino added that management had received a letter from the mayor’s office in advance about traffic closures, and that tenants have been anticipating some disruptions. FedEx and UPS deliveries to the building have been rescheduled to late and early hours, when 41st Street will be open.

EVO’s President Dana Moskowitz explained that the management has loaded materials into the building in advance, to ensure that construction jobs could go on without interruption. She added that clothing store BCBG, one of the building’s anchor tenants, also pre-loaded some goods.

“Ideally the tenants would like to benefit from the Boulevard,” Moskowitz added. A Toboggan run will take place right in front of the building, and retail tenants such as Café Duke could attract some of the crowds.

Tim Tompkins, president of the Times Square Alliance, the local business improvement district, is similarly optimistic.
“We are very hopeful that the Super Bowl Boulevard will draw additional crowds, and that people will also grab a bite and continue to see Broadway shows,” he said.

“There was some understandable anxiety,” he explained. Some businesses were worried that Times Square could become overcrowded. “But we always remind people that this is actually our slow season. Having a bunch of Super Bowl visitors won’t even get us close to full capacity.”
Ensuring that Times Square will continue to function despite the crowds and closures is Sam Schwartz Engineering’s job.

The company, which specializes in transportation engineering and planning, has helped develop the transportation management plan and logistics for the Boulevard along with city agencies and the NFL.

CEO Sam Schwartz said his company has worked for the NFL in the past, and visited previous Super Bowl locations in preparation for the event.

“We never had the event in such a cold climate, in an area this intensely populated and full of businesses. The NFL made it very clear to us that they want the city to function properly,” he explained.

Sam Schwartz’s plan involves virtually all aspects of transportation, from re-directing traffic, garbage pick-up to mail delivery. The company is also tasked with making sure foot traffic flows orderly along the Boulevard. Schwartz explained that he has hired 20 people who are solely responsible for directing pedestrians.

Despite the difficulties involved, the company is optimistic that the Super Bowl Boulevard won’t cause any major problems. And at least some of the credit belongs to former mayor Michael Blomberg.

“We are really lucky here because Bloomberg already reduced the importance of Broadway to traffic,” said Sam Schwartz project manager Frank Filiciotto. “There is a lot less traffic on Broadway now than we would have had to deal with otherwise.”