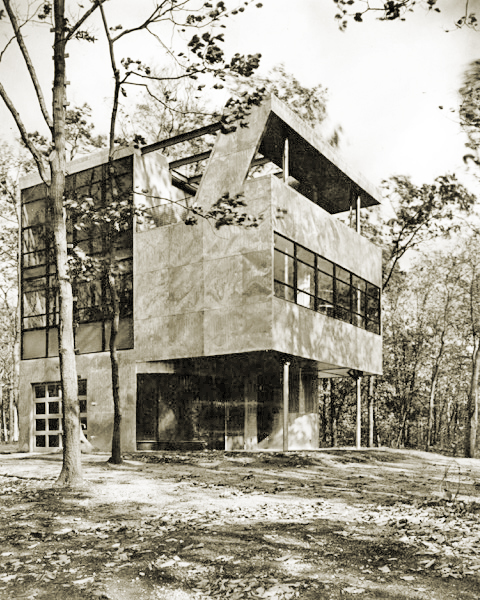 The Aluminaire, a home designed by Albert Frey, to be moved from NY to Palm Springs

An unusual and important building just moved from storage in New York to a planned new home in Palm Springs, California, which should open for public display by 2018.

The Aluminaire was displayed at the 1931 Allied Arts and Industries and the Architectural League of New York exhibition.

It was designed by A. Lawrence Kocher, managing editor of Architectural Record, and Albert Frey, a 28 year old Swiss architect, recently arrived in America after having worked for Le Corbusier in Paris.

The pre-fabricated aluminum and steel home, a study in disciplined, rectilinear geometry, was intended to be mass-produced and affordable, using inexpensive, off-the-shelf materials.

The design allowed for modern living in a compact space, with features including a dumbwaiter, garden terrace, sliding screens and retractable furniture.

The Aluminaire was a sensation and was later included in the first exhibition on architecture, in 1932, at the Museum of Modern Art, “The International Style – Architecture Since 1922,” curated by Philip Johnson, which was also the basis of a book by the same title as the exhibition, a manifesto for the International Style by Philip Johnson and Henry Russell Hitchcock.

Following the Exhibition, Aluminaire was purchased by Wallace Harrison, one of the architects of Rockefeller Center, dismantled and moved to his country estate, but by the late 80’s it was at risk of demolition.

At that time, a concerned group of preservationists saved it and it was donated to the New York Institute of Technology on Long Island where architectural professors Michael Schwarting and Frances Campani had their students study, document, reassemble and restore it.  When that campus closed in 2004, the house was again dismantled and put into storage.

After languishing in a shipping container in New York for years, a confluence of timing, creative thinking, and passionate dedication aligned in a brilliant solution to give the structure a new life in Palm Springs.

In its shipping container, the Aluminaire House was driven across the country on the morning of February 9, 2017, arriving in Palm Springs in time for the start of Modernism Week, the largest event in the country that celebrates midcentury architecture and design. There, a lecture by Schwarting and Campani, who have now spent 29 years saving Aluminaire from destruction, was moderated by renowned broadcast journalist Susan Stamberg, special correspondent for National Public Radio.

Following the presentation at the Palm Springs Art Museum, a fundraiser honoring the architects took place at another historic home; another fundraiser is being planned in New York for this fall; information will be available on www.aluminaire.org

Once the Downtown Palm Springs Park is complete within the next two years, the Aluminaire House will be reassembled for placement across from the Palm Springs Art Museum.