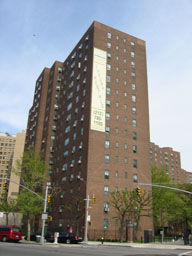 Tenants of the massive Stuyvesant Town apartment complex on Manhattan’s east side are planning to protest what they call a “circling of sharksˮ vying to take over the property.

Following reports that special debt servicer CWCapital’s own parent company, Fortress, intends to bid on Stuy Town on the day of a foreclosure sale on June 13, the ST-PCV Tenants Association has organized a rally on the steps on City Hall.

With a reported $4.7 billion bid on the property by Fortess, TA President John Marsh said the pressure to make a profit is likely to create a repeat scenario of the Tishman Speyer purchase with its business plan of evicting tenants paying lower rents. “Right this instant we all need to start talking about what we are going to do about Fortress and the other sharks circling us,” said Marsh. “The writing is on the wall. It’s about to happen again. Tishman Speyer redux. The financial press is speculating, full of scenarios providing detailed financial road maps to our demise.

Another issue is the debate over whether a purchase by Fortress is a conflict of interest. Susan Steinberg, chair of the Tenants Association, said, “Without having access to a basic document, it’s really hard to make a call.”

The Tenants Association announced its own intention to bid on the property with partner Brookfield Asset Management in 2011. The TA/Brookfield bid has never had a dollar amount attached to it and that has not changed. However, the TA has stressed that the bondholders would be made whole.
CWCapital has declined to comment on the Fortress bid and was not available for comment on the rally.

The purpose of the rally, the TA said, is to show any potential owner the political might of the tenants.

On May 13, CWCapital announced it would begin foreclosure proceedings on a chunk of the mezzanine debt that’s reportedly worth $300 million and set a sale for June 13. By doing so it will be able to take over the property, at least temporarily.

Kites for a Cure