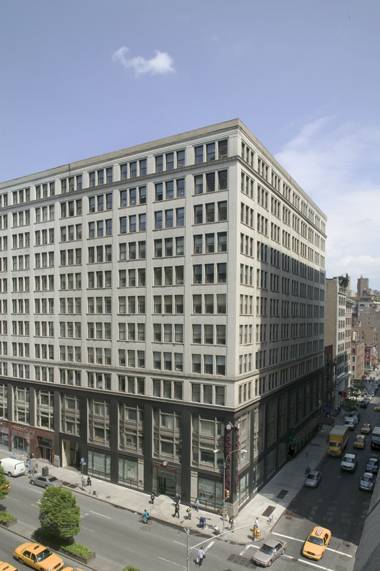 Matt Leon was the star of the show at a curtain call for the multi-million dollar renovation of TF Cornerstone’s 387 Park Avenue South last week.
Unveiling the work directed by Moed de Armas & Shannon during a broker party for a slew of senior brokers, Leon said he has several solid offers for the 100,000 s/f stack of pristine space at the top of the 12-story building.

“We’re feeling good,” admitted Leon, and executive managing director at Newmark Grubb Knight Frank who has overseen the renovation along with Chip Sealy of TF Cornerstone and is leading the leasing team looking to repopulate the 215,000 s/f property following its top-to-bottom makeover.

Co-hosting the event with owners Fred and Tom Elghanyan, Leon showed off the space that has turned the heads of “major institutional financial service firms and private equity-funded media companies.”

TF Cornerstone is finalizing upgrades to the building which include new mechanicals, elevators, a multi-story full glass façade and a stunning 1,700 s/f glass skybox conference facility surrounded by the new exclusive roof deck.

There are two new lobbies – one on PAS and the other coming on 27th Street that could provide exclusive entry for an anchor tenant who would have access to the roof deck and sky conference facility from a new 12th floor dedicated elevator.

“It’s spectacular, the property has been re-done to the point where it’s a whole new building,” Leon said.

TF Cornerstone bought 387 Park South for $67 million in 2005 and moved its own 50,000 s/f headquarters there in 2011. In order to clear the property for renovation, they allowed the rest of the tenants’ leases to expire.

He is employing a strategy that’s proven successful at Carnegie Hall Tower, the prestigious Plaza District tower for which he’s also the exclusive leasing agent.
“We’re bringing a Plaza District mentality to Park Avenue South,” said Leon. “387 PAS will offer a full concession package with gross leases including directly metered electricity, nightly cleaning, direct operating and flexible cooling. What you see is what you pay and gone are the hidden charges.”

He added, “We expect to be leased up very soon. In the past four weeks alone, since we went live with our marketing, we have had no less than 25 tours and several offers on the top block. Beyond that, we are receiving single floor offers for 20,000 s/f flexing up to 40 and 60,000 s/f.”

The property is arriving on the market at a time when space in Midtown South is at a premium. The district had the largest year-over-year growth in asking rents and leasing activity this year.

Institutional buyers have been scooping up buildings to renovate and reposition to meet the demands of the sophisticated office tenants who’ve been flocking there.

RXR, Westbrook, Fortress, Atlas Capital, the Carlyle Group, Extell and L&L Acquisitions have all made acquisitions there in recent years and, although several chunks of rehabbed space have pushed the availability rate up to 10.7 percent, rents continue to rise.

According to Jones Lang LaSalle, 75 percent of the nearly 700,000 s/f of teach leases signed in January were done in Midtown South, helping push average asking rents up to $65.45 psf, a new record high, according to the CBRE May MarketView.