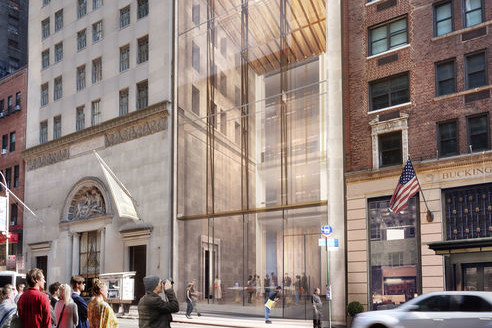 The Steinway Tower, which is expected to become the world’s skinniest skyscraper once it’s built, is said to be millions of dollars over budget, setting up a court dispute between its lenders and developers.

According to the New York Post, the planned 82-story building, located at 111 West 57th  Street, is facing foreclosure due to “egregious oversights like neglecting to budget for construction cranes.” The tower, which is currently under 20 stories, is said to already be $50 million over budget. The apartment building’s construction budget stood at $855 million in June 2015.

“Over the past four years, [AmBase] has invested over $70 million in the property. In two days, their investment may be wiped out,” AmBase’s lawsuit read.

Last week, a judge prevented Spruce Capital from taking ownership of the property. The ruling comes almost a month after Maloney, Stern and AmBase defaulted on a $25 million loan payment.

According to the Commercial Observer, Spruce acquired the mezzanine loan from an unnamed lender. A provision in the mortgage allowed Spruce to accelerate the pay back schedule when construction costs descend to “an out-of-balance condition.” Had Spruce been allowed to take ownership of Steinway Tower, Ambase would have lost its stake in the building.  Real estate attorney Stephen Meister, who represents AmBase, told the Observer that the case “would stop Lt. Columbo dead in his tracks.” “Why are Stern and Maloney so anxious to have their $35 million investment annihilated?” he said.

Spruce Capital has the right to sell Steinway Tower through a foreclosure auction, according to Meister. If it does so, AmBase would be able to get back part of its investment.