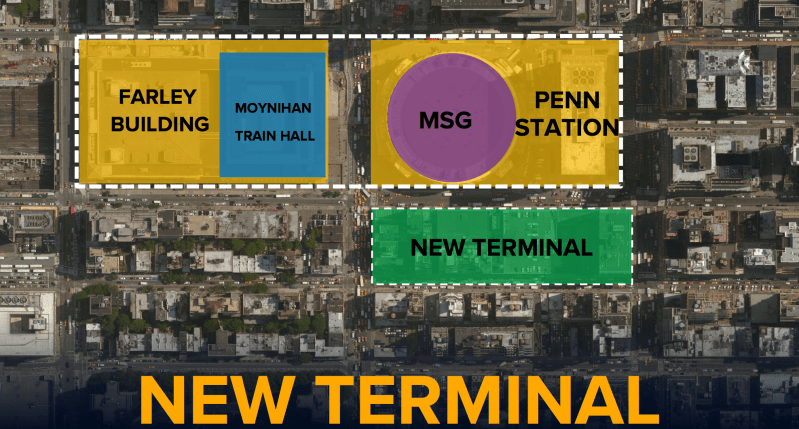 Calling his vision the Empire Station Complex, Cuomo told the Association for a Better New York his plan would involve the acquisition of the block south of Penn Station to create an expanded, remodeled and interconnected train and subway complex.

The plan creates new, larger terminals and would increase track and train capacity by 40 percent — addressing the underlying and most critical problem at the busiest transit hub in the Western Hemisphere.

“For over a century, New York’s transportation infrastructure drove our growth, especially in New York City, and after decades of idle talk without any real action, we are once again investing in large public projects to support a stronger economy. We’ve built more than any state in the nation, and now we are taking another big step to address one of the weakest links in our transit system,” Governor Cuomo told the group.

“This expansion in the block south of Penn — combined with the soon-to-be-completed Moynihan Train Hall and the transformation of the existing Penn facility — will create an interconnected, world-class Empire Station Complex that will expand capacity by 40 percent.

“This will improve how more than half a million New Yorkers commute, travel and work every day, while transforming Penn into the world-class facility the Empire State deserves.”

Creating the Empire Station Complex would include acquiring the property south of Penn Station to allow for the addition of at least eight new underground tracks.

It could also involve converting the MSG Theater on 8th Avenue into a showpiece entrance into Penn Station.

Amtrak, which owns the existing Penn Station, will participate in planning and financing the project.

Additionally, the Governor announced New York State, Amtrak and other stakeholders will partner with a consultant design team – led by FXCollaborative – to develop and help carry out the plan to transform the existing Penn Station.

Penn Station’s corridors and waiting areas are overcrowded, its platforms and tracks are over capacity, and it is only getting worse — with delays, mounting maintenance problems, serious safety and security issues and inadequate accessibility becoming regular occurrences.

The new complex, capable of handling more passengers than ever before, would support the State’s efforts to reduce congestion — which include the nation-leading Central Business District Tolling program — aimed at getting more people out of theirs cars and into a 21st century mass transit network.

Immediate improvements are already underway, including the Moynihan Train Hall and an expanded LIRR corridor, which will ease congestion in the short term and enhance the passenger experience.

The plan will be overseen by Empire State Development, which will establish a General Project Plan in collaboration with the MTA and Amtrak. MTA will be responsible for the transportation planning components of the project and the plan to transform Penn Station.

Under the Empire Station Complex Plan, the properties on the block south of Penn Station will be acquired, enabling Penn Station’s underground infrastructure to grow southward.

This represents the first expansion of Penn Station’s foundational infrastructure since the station was completed in 1910.

Throughout the process, Empire State Development and the MTA will work with local community stakeholders, including New York City, Community Boards, civic groups, affected property owners, elected officials and New Jersey Transit, to ensure their needs are represented in the final development plan.