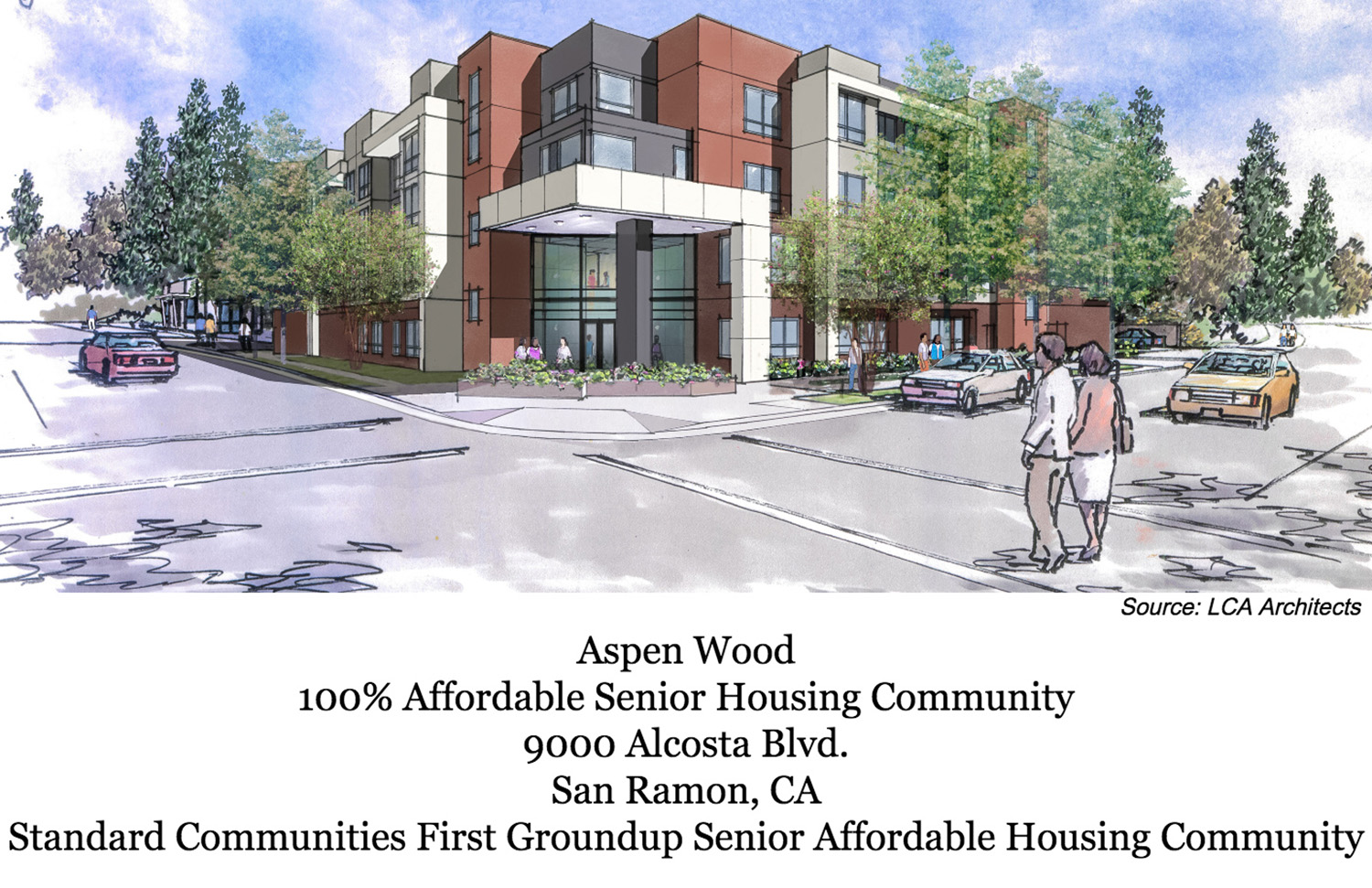 Standard Communities, a major national affordable housing developer and investor, has led a public-private partnership in the ground up development of a $55 million senior 100% affordable housing community in San Ramon, CA. Aspen Wood will provide 123 units of affordable housing for seniors with incomes between 30% and 60% of the Area Median Income.

“Standard has long been focused on the need for quality affordable housing for senior
populations,” said Jeffrey Jaeger, Co-Founder and Principal of Standard Communities. “The
ability to produce this kind of affordable housing today relies on Standard’s core
attributes—quality, speed and flexibility—as well as using innovative financing methods and public-private partnerships in the most effective ways possible to make the greatest impact.”

Aspen Wood will be built on a currently vacant site of 1.4 acres at 9000 Alcosta Blvd. in San
Ramon, about 30 miles southeast of Oakland. Amenities at the 130,000 square foot community will include a community room, recreation deck/courtyard, fitness center, business center and pet spa.

“This is the first affordable development in San Ramon in more than 20 years. The site was
originally intended for a luxury development, but we worked closely with the City to turn the site into affordable housing for seniors,” said Sean Carpenter, Director of Development at Standard Communities. “With the cost of living rising across the region and nation, adding more affordable housing in Contra Costa County and the City of San Ramon—one of the wealthiest communities in the Bay Area—is more important than ever,” added Carpenter.

The seller of the parcel is Black Mountain Development. The General Contractor is Deacon and the design team is led by LCA Architects.

Financing for Aspen Wood was provided by the City of San Ramon, the California Municipal
Finance Authority (CMFA), the California Debt Limit Allocation Committee (CDLAC), the
California Tax Credit Allocation Committee (CTCAC) with Low Income Housing Tax Credits
(LIHTC) arranged in partnership with Boston Financial and Candeur Group. Construction and long-term financing were provided by East West Bank, which has invested and financed more than $1 billion to build, preserve, or rehabilitate over 15,000 affordable units since 1996. This public-private partnership also includes the nonprofit Housing on Merit.

“For decades, East West Bank has collaborated with public and private sector partners to bridge the affordable housing gap in the communities we serve,” said Robert Lo, Executive Vice President and Head of Commercial Real Estate Banking at East West Bank. “It is why we’re so proud to be a part of one of the few LIHTC projects in the City of San Ramon. This project is yet another proof point of what we can accomplish when we work together on a shared goal.”

Based in Los Angeles and New York, Standard Communities has a national portfolio of over
14,100 apartment units and has completed more than $3.8 billion of affordable housing
acquisitions and rehabilitations nationwide. Standard Communities strives to cultivate long-term public and private partnerships to produce and preserve high-quality, affordable, and
environmentally sustainable housing.