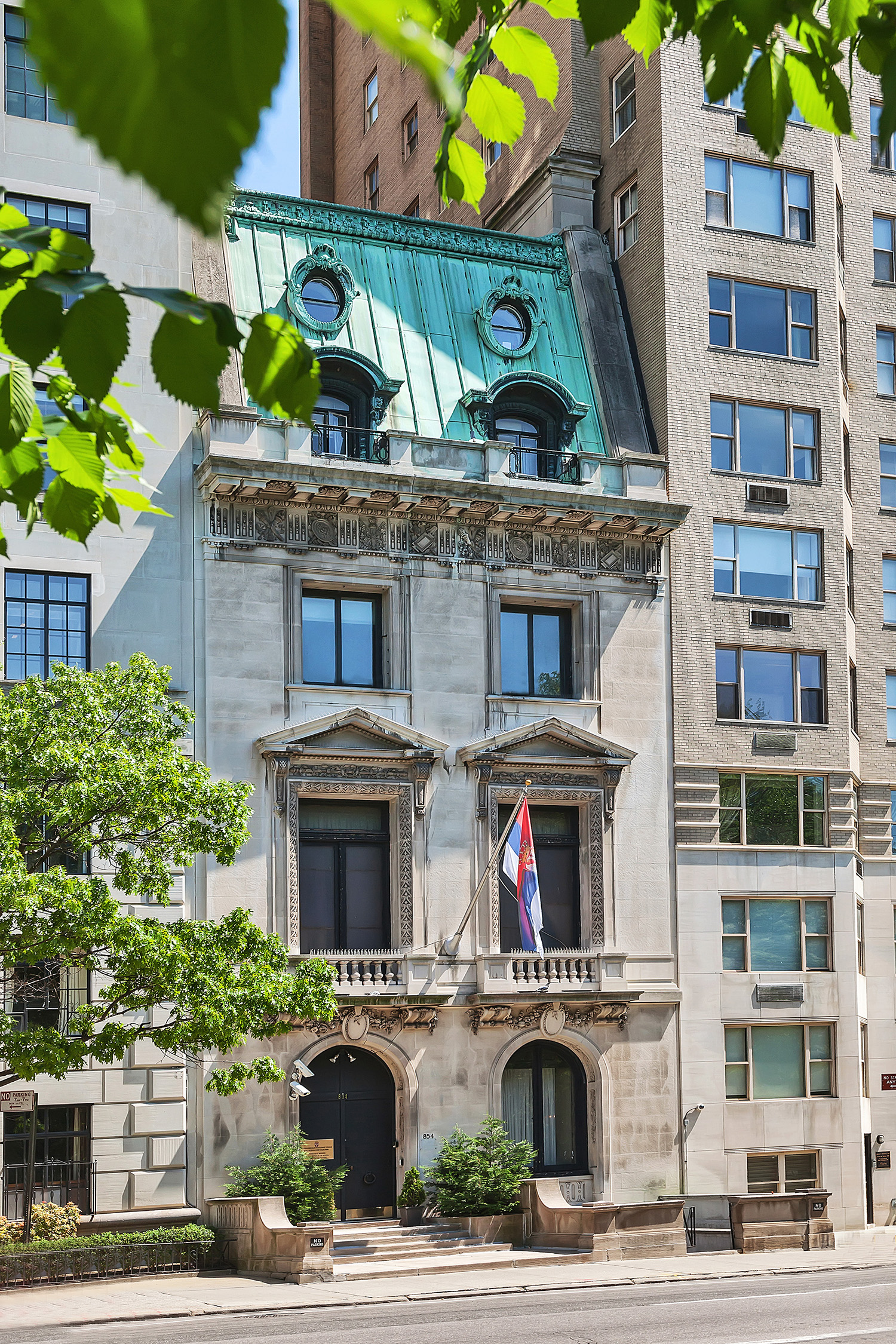 Douglas Elliman Realty, one of the largest independent residential real estate brokerages in the United States, is pleased to announce that Tristan Harper, Associate Broker and one of its consistently top producing agents, has sold and closed a 20,000SF historic mansion located at 854 Fifth Avenue in Manhattan, NY, in an all cash, off-the-market transaction, for a full asking price of $50 Million, net to seller.  Additionally, the purchaser paid all closing cost, some of which are typically paid by the seller (transfer taxes, broker fees etc.) which added over 11% to the out-of-pocket expense for the buyer.

The Seller — Successor States to Former Socialist Federal Republic of Yugoslavia (namely: Bosnia and Herzegovina, Croatia, North Macedonia, Serbia and Slovenia) and the Purchaser – a Limited Liability Company with an address in New York City, signed the contract on 3/9/22 and finalized the closing on 9/27/22.

“The sale of 854 Fifth Avenue, for the first time in over 75 years, opens the next chapter in the glorious history of this property, which was once owned by the granddaughter of scion Cornelius Vanderbilt, and later by the communist leader Josip Broz Tito of Yugoslavia.  The new owner of the trophy building has just purchased a significant piece of New York City’s history,” says Tristan Harper.

854 Fifth Avenue is a 30.5-foot-wide limestone mansion designed in 1903 by architects Warren and Wetmore of Manhattan’s Grand Central Station fame. In1969, it was designated an Individual Landmark of New York City, for its “impressive purity of style which was executed with such finesse and authority.”

A Beaux Arts-style residence features 32 oversized rooms and 12 bathrooms spread on nine levels directly opposite Central Park.  Spectacular views from 10 rooms facing the Park include some of Midtown and West Side’s most iconic buildings, both old and new.

Most of the home’s original details remain intact to this day, including two stunning 18th Century French tapestries presiding over the grand winding staircase, 17 fireplaces, hand-carved balustrades made of single pieces of rare Italian marble, gold-leafed boiserie, hand-painted ceilings reminiscent of the Old Europe, paneling from an antique French Chateau retrofitted to this space, and two elevators. There is also an ornate skylight over a two-story high main hall with ceilings 34 feet tall.

The house was built for R. Livingston Beekman who soon after became the Governor of Rhode Island and sold the building to George Grant. The next owners became Henry White and his heiress-wife Emily Thorn Vanderbilt Sloane White, the granddaughter of scion Cornelius Vanderbilt.

In 1946, Josip Broz Tito, the late head of Yugoslavia purchased the house for his country’s Permanent Mission to the United Nations.  In 1961, Tito and the presidents of Egypt, Ghana, India and Indonesia drafted a plan for the creation of the Non-Aligned Movement in one of the main rooms of the mansion. The Movement will grow to become an alliance of almost one third of the world’s nations, during the Cold War.

After Yugoslavia disintegrated in the civil war of the 1990s, the property was “inherited” by the governments of the five Successor States.  Following an UN-sponsored treaty, signed in the early 2000s, the property first hit the market in 2017.  Two initial offers were not agreed upon due to the complexity of negotiations and internal procedural technicalities among the owners.

In December of 2018, an electric fire almost destroyed the residence and the property was withdrawn from the market.  It remained unavailable for showings thru Covid-19 pandemic and beyond.

Current purchaser’s full price offer was presented sight-unseen, in 2021.  The contract was signed almost nine months later and the closing, which took place in three parts, was finalized on 9/27/2022.

“This was a challenging and truly one-of-a-kind deal which necessitated my multiple trips to the Balkan countries to meet with high government officials, including one of their presidents.  The deal would have never happened without the commitment and determination of everyone involved,” remarks Tristan Harper.