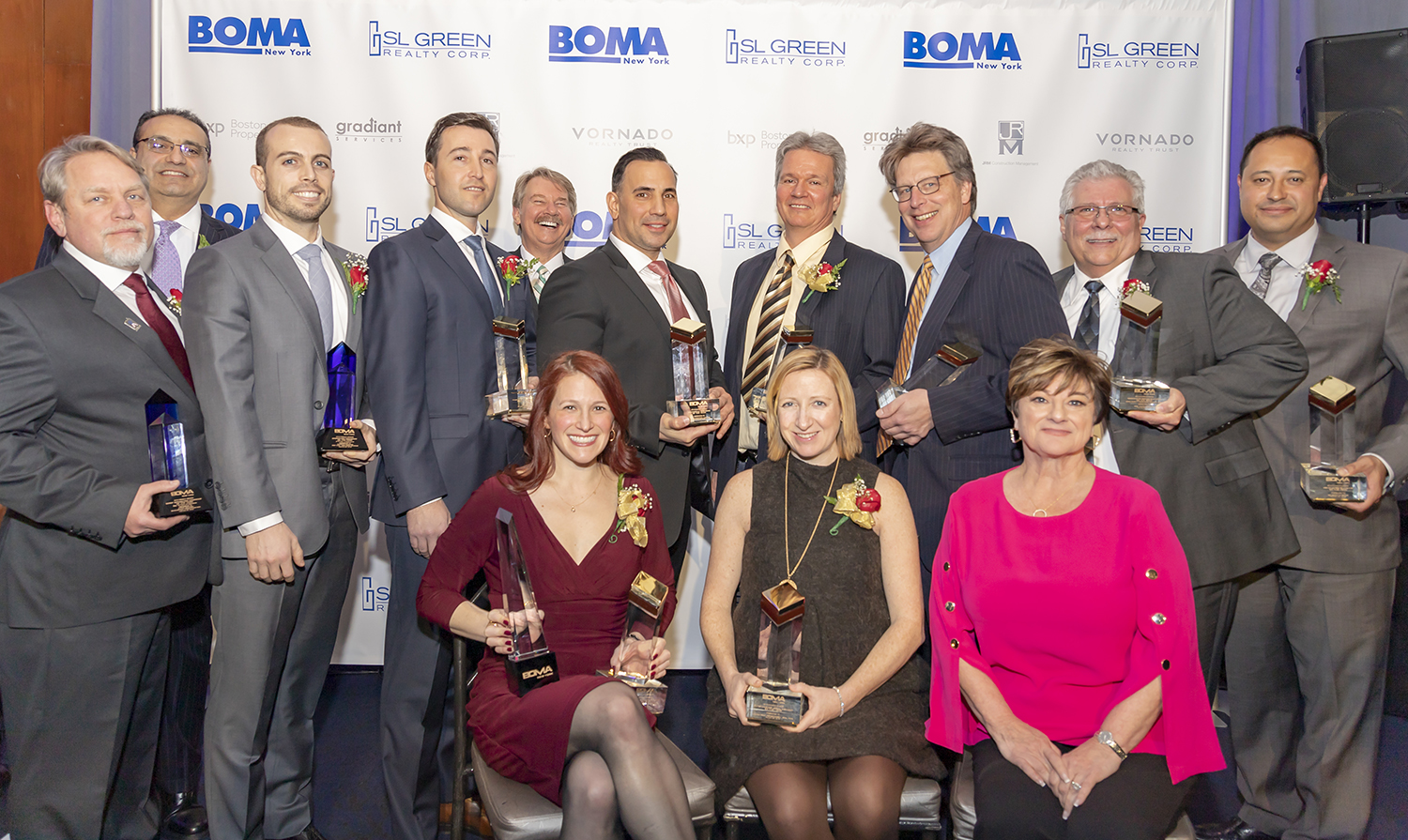 The honor is the highlight of the annual Pinnacle Awards hosted by the Building Owners & Managers Association of Greater New York (BOMA) to celebrate the cityʼs best run office buildings.

It was a double whammy for property manager Lauren Hammer and her team who, earlier in the night, also picked up a statue for Operating Office Building Over 1 MSF.

“There are a lot of people to thank for this award,” Hammer told a record 900-strong crowd at the spirited celebration held at Pier Sixty at Chelsea Piers. “From the cleaning, engineering and security staff, many of whom have been at the building for over 20 years, to the leadership team, in particular Ed Piccinich, we have all worked together to achieve a level of excellence deserving of this award.”

Management teams from properties throughout the city were recognized in 11 different categories for what is the New York round of the BOMA International TOBY (The Outstanding Building of the Year) competition. Considered one of the most difficult industry recognitions to earn, winners qualify to compete at the Mid-Atlantic awards and then the BOMA International TOBY competition. The Grand Pinnacle is the winner with the highest overall score across all categories.

Built in 1929 as part of Metropolitan Life’s headquarters, the 2.3 MSF 11 Madison Avenue is home to juggernauts Credit Suisse and Sony. SL Green’s management has allowed both the banking giant and multinational conglomerate to operate side by side from headquarters that are virtually buildings within buildings. 49 elevators transport tenants from trading floors to sounds rooms, offices and lounges and the building has its own ice plant and LEED Gold certification while maintaining its position as a National Historic Landmark.

SL Green also collected the Historic Building Pinnacle for its work restoring 420 Lexington, otherwise known as The Graybar Building. Property manager Paul Palagian collected the award recounting the millions ownership has spent upgrading the tower that it also calls home. “We have over 260 tenants and the SL Green corporate offices, so it’s a very busy building,” noted Palagian.

And the REIT’s Endrit Kukaj was honored as Manager of the Year (3-10 years) for his work in the operation and management of over one million square feet of assets under SL Green purview.

Other big winners of the night were Silverstein Properties, which earned the New Construction Pinnacle for 3 World Trade Center. Collecting the statue, property manager  Alex Riveira hailed chairman Larry Silverstein for his “commitment and perseverance” to rebuilding the World Trade Center. Now over 55 percent leased and anchored by media investment firm, GroupM, 3 WTC is hailed as a “model of transparency and sustainability.”

Silverstein’s Stephen Nathan became the first BOMA member to earn the organization’s Chief Operating Engineer of the Year Pinnacle, an award introduced for the first time this year. After joining the company in 1984 as an engineer’s helper, Nathan rose through the ranks to become chief engineer responsible for the operation, maintenance and repair of all mechanical, electrical, plumbing and fire suppression systems at 3 WTC.

Cushman & Wakefield’s Francis Noonan won Operating Engineer of the Year for his role in the maintenance of Met Life’s headquarters at 200 Park Avenue.

Lawrence Spahn of H&R REIT was named Manager of the Year (10+ years) and, in one of the most moving moments of the night, Laura Belt-Ponomarev collected BOMA’s Outstanding Member of the Year award as her father Tom, a former BOMA president, shed a tear at the side of the podium.

Ponomarev manages her family’s 58-64 40th Street Corporation, a company founded by her great grandmother and great aunt, and oversees every aspect of the properties now operating within the family-owned portfolio.

She told the crowd, “It is rare to be able to work with a parent and also to be able to call that parent a mentor and a friend, so I thank my father for giving me the opportunity to do what I do.”

Ponomarev also praised the work of BOMA in “raising the bar” for property managers and providing a platform that helps elevate the profession. “BOMA has given small building owners a platform to have their voices heard and for that I am very thankful. They have provided tools that help us learn and opportunities that help us broaden our networks to make our properties and our business better.”

Vornado Realty Trust’s transformation of 90 Park Avenue earned the company the Renovated Building Pinnacle. Manager Adrian Sierra picked up the award that recognized Vornado’s audacious effort to reimagine a property it bought in 2015 with 70 percent of the leases set to expire simultaneously. A synchronized renovation process allowed the owner to reconfigure the tenancy while creating a 21st century office tower that can command premium rents.

Richard Molfese, general manager at JLL, accepted the award for Operating Building (500,000 – 1 MSF) for 757 Third Avenue and the Corporate Facility Pinnacle went to NY Life’s 51 Madison Avenue, one of the few corporate headquarters of its time that is still home to its original owner and developer. The award was accepted by Cushman & Wakefield manager Sharon Hart.

BOMA-NY president Hani Salama, SVP at Capital Properties, praised all of the winners and nominees “for your commitment to taking New York’s real estate to new heights.”

“The record turnout tonight is a testament to the work of our members who have demonstrated unmatched excellence in their fields,” Salama said.