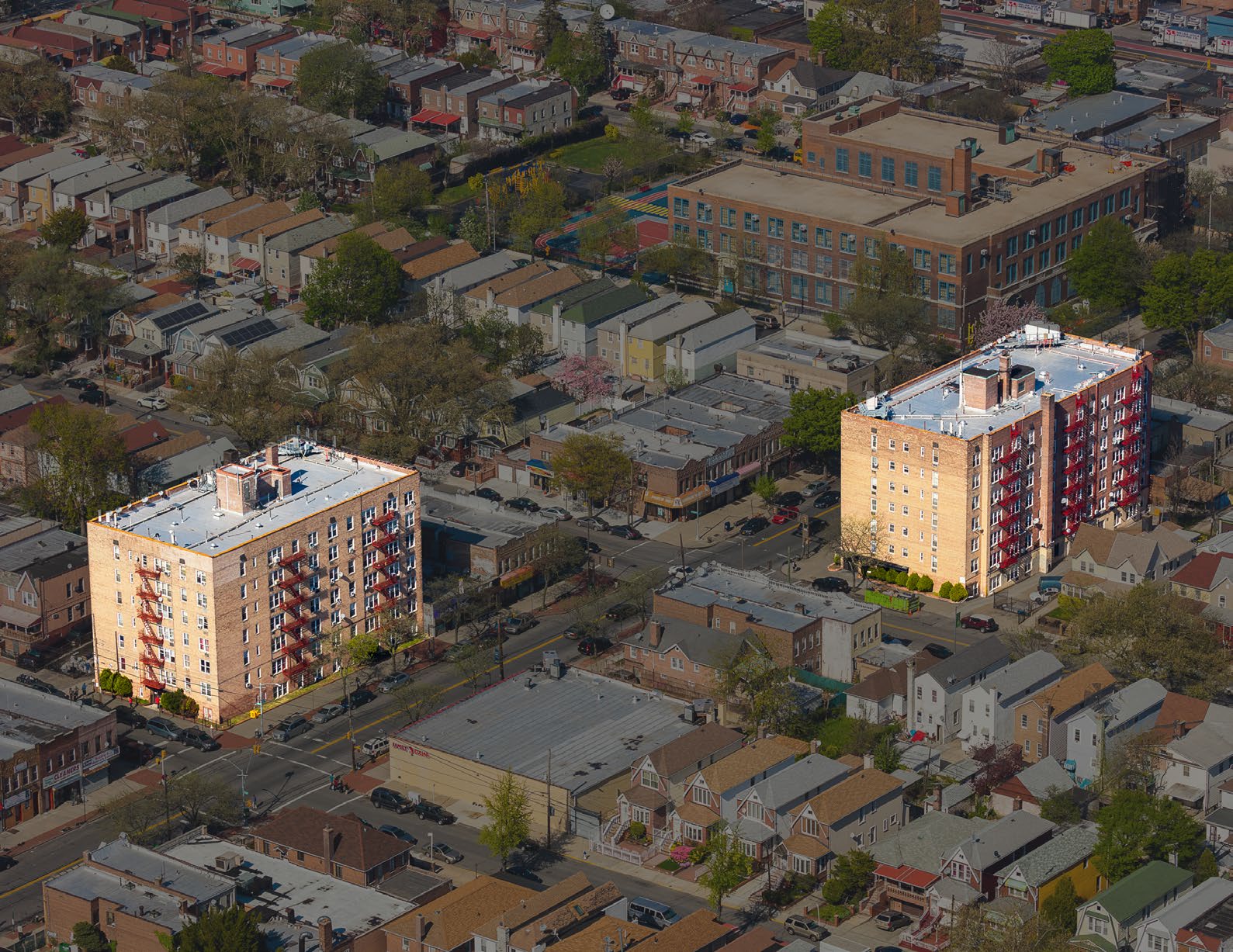 Both are corner buildings and contain laundry rooms and elevators, rare for the East Flatbush neighborhood.
“We have seen consistent demand for quality multifamily assets in the East Flatbush area. This unique area is undergoing change and we expect long-term capital appreciation as more investors become educated about the fundamentals of the neighborhood,” said Sprung.

According to TRD, the buyer was a joint venture of Malek Management and Coney Realty Group. The seller was Samjo Realty Corporation.

Cushman & Wakefield announced that the firm has arranged the sale of a 17,025 s/f vacant residential lot at 3129-3139 137th Street in Flushing, Queens. The property was sold for $11 million.

“Flushing has emerged as one of the fastest growing neighborhoods in Queens and is an ideal location for commercial and residential development,” said Preuss.

“This sale offers a prime opportunity to capitalize on Flushing’s rapidly growing population and the demand for residential projects.”

Located on 137th Street between 31st Road and 32nd Avenue, the property is within walking distance of Leavitts Park and near the 7 subway line.

The building was purchased by American HK Development, Inc.

Nearby neighborhood amenities include Gantry Plaza State Park, the 12-acre waterfront park that overlooks the East River and Manhattan.

47-09 5th Street is near a variety of transportation options, including a six-minute walk to the 7 subway line.

The properties are comprised of a total of 64 apartments totaling 64,000 s/f.

“This deal presented the buyer with the rare opportunity to acquire a property from a long-term owner who had maintained the property very well,” said Yankelovich. “Occupying an entire corner block-front, the units have great layouts with terrific exposure to sunlight.”

Thor Equities has closed on the purchase of The James New York – Soho hotel.

The deal closed at $66.3 million ,nearly $19 million less than PGIM paid for it in 2013, according to CoStar data.
Thor Hospitality Group, a newly formed division of Thor Equities, is planning substantial renovations and upgrades to the 18-story, 114-key property at 27 Grand Street.

The 75,800- s/f boutique property features three food and beverage outlets, and meeting and event space totaling 1,500 s/f.
“The James New York is a quality property located in the center of a bustling area of SoHo, which has become one of New York’s premier live, work and play neighborhoods,” said Jack Joe Sitt, vice president of Thor Hospitality Group.

Jeffrey Davis of JLL brokered the deal for the hotel, where amenities include an outdoor rooftop swimming pool and fitness center with views of the Manhattan skyline and Hudson River, as well as 24-hour in-room dining.

The property is overbuilt, according to Saidian, and comprises of 22,740 s/f on a 6,933 s/f lot. It was originally used as an industrial warehouse, but zoning would permit retail, condo or hotel development in an area prime for renewal.

47-33 5th Street sits on the edge of the proposed site in a neighborhood to which Nassi is no stranger. He already owns a large Long Island City portfolio, including condo projects and rentals located at 47-05 5th Street and 47-27 5th Street and 5-18 and 5-20 51st Avenue.

The building has 75 feet of frontage with double height ceilings and is located one block from the waterfront and three blocks from the Vernon Jackson 7 stop.

Saidian represented both the buyer and the seller, Kyu Heung Park of Eunhasu Corp. who had originally planned an apartment covnersion after he purchased the building for $12 million in 2015.

GFI Realty Services has been named the exclusive sales agent for 263 Bowery, a 6,500 s/f office and retail condo on the Lower East Side.

Situated along The Bowery, the condo is comprised of two occupied office units, each of which is 2,000 s/f, and a vacant retail storefront that encompasses 2,500 s/f across the ground floor and basement levels.

The asset is situated at the base of a luxury residential condominium building designed by Karl Fischer.

GFI Realty managing director Roni Abudi will oversee the sale of the condo, with pricing targeted at $14 million. Abudi is also overseeing leasing for the 2,500 s/f retail space.

According to Abudi, “While the seller is looking to divest of this asset, he is also interested in securing a ground-floor tenant, which would make the offering more attractive to some buyers.

“We’re marketing to potential buyers for the three-floor condo as well as tenants for the retail, and we expect a lot of interest from parties seeking to capitalize on the area’s resurgence.”

“61 South Paramus has the potential to be one of Bergen County’s best intuitional office buildings. It currently houses significant corporate operations and is situated in one of the most highly sought-after office locations.” said Stephen Sullivan, chief investment officer at Onyx Equities.

The acquisition of the 98 percent occupied center marks ShopOne’s entry into the New York metro area.

Situated at the corner of Oak Tree Road and Park Avenue, the ACME Markets-anchored property features a mix of national and local retailers including CVS, Advance Auto Parts, and Wells Fargo Bank.

“The purchase of Oak Park Commons aligns with our strategy of acquiring well-located shopping centers in densely populated, fundamentally strong markets across the country,” said Michael Carroll, CEO of ShopOne. “This property is particularly attractive considering its prime position in a major transportation corridor and the opportunity to unlock incremental value through operational and capital improvements.”