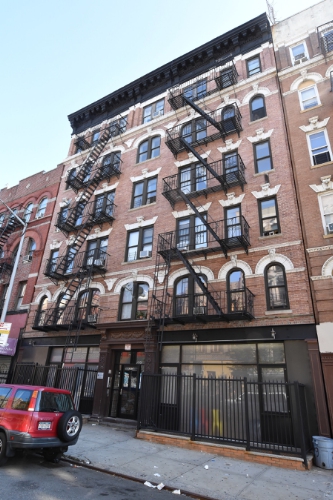 NGKF Capital Markets has been retained as the exclusive broker for the sale of 16 East 16th Street.
The 39,345 s/f Flatiron building is being marketed by senior managing directors David Noonan and Jennifer Schwartzman on behalf of seller, Family Life Ventures, Corp., working with the seller’s legal counsel, Joshua Stein PLLC.

Currently occupied by a health center, the property is a historic building with a rear yard and unused development rights potential.

The building, which will be delivered entirely vacant, presents opportunities to be redeveloped for office, retail or residential uses, according to the brokers.

The property offers over 50 feet of frontage along East 16th Street, a 100-year-old stone façade, high ceilings and large windows.

“Investors continue to value Manhattan assets with historic character,” said Noonan. “This is an opportunity for a thoughtful developer or user to create something truly special.”

Cushman & Wakefield has been retained to sell a multifamily building at 1765 Townsend Avenue located between East 176th and East 175th Streets in the Mount Hope neighborhood of the Bronx.
The asking price is $30,500,000.

Constructed in 2008 with a 25-year 421-A tax abatement, all residential units are rent-stabilized. The commercial space on the second floor is tenanted by Brightpoint Health on a five-year lease term featuring 2.5 percent yearly increases through June 2021.

Property amenities include a laundry room and a parking lot.

Marking TEI’s first investment purchase in the state, the deal includes the purchase of the Barber Building, located at 62-74 Main Street, and 9 Flat Street, together spanning approximately 64,617 s/f.

The historic six-story, 52,000-square-foot Barber Building is made up of both residential and retail uses. The sale also included the adjacent building at 9 Flat Street. The first two floors of the Barber Building and 9 Flat Street are occupied by long-term tenant Sam’s Outdoor Outfitters.

The seller was an affiliate of Sam’s Outdoor Outfitters and at closing, Sam’ Outdoor entered into a long-term lease with the buyer. The remainder of the Barber Building is comprised of 48 apartment units.

“As Time Equities continues to evaluate potential investments across a variety of regions and asset classes, this transaction offers us an attractive opportunity to become more active in the state of Vermont and other surrounding areas. The deal provides strong cash flow, value-add opportunities and the potential for long-term capital appreciation” says Max Pastor, Associate Director of Acquisitions at TEI.

Ranger Curran of RE/MAX Town & Country brokered the deal on behalf of the seller.

MRC acquired the 6-floor, 35-unit, 22,800 s/f building for $9.7 million in April 2013 and embarked on a renovation and repositioning plan aimed at adding significant value.

Josh Zegen, Managing Principal for MRC, noted, “When we acquired it, this property needed modernization to improve its position in the competitive Williamsburg rental market.

“Our construction and asset management teams were successful in creating a modernized multifamily product that was appealing to investors. There was significant interest in the property from a variety of potential purchasers, and we were able to achieve a strong result.”

DHA Capital has closed on the acquisition of 75 Kenmare Street.

The planned boutique condominium will be comprised of 38 one- to four-bedroom homes ranging in price from $1.7 million to over $12 million.

Located in NoLita, the building will also have about 8,000 s/f of retail at its base.
“We expect very strong demand for this product, as there is nothing else like it on the market,” said Dan Hollander, Managing Principal of DHA Capital.

“In addition to bringing together two highly coveted design teams, 75 Kenmare is also is also located in the heart of Manhattan’s most sought-after neighborhood.”

With an existing parking garage on the site, DHA Capital, along with partners AMS Acquisitions and First Atlantic Real Estate, first entered into contract to purchase the property in 2015.

They have since tapped musician Lenny Kravitz’s namesake firm, Kravitz Design to lead interior design. Demolition is expected to begin by early to mid-summer 2016 with construction commencing shortly thereafter.

Construction loan and acquisition financing is being provided by Deutsche Bank.

Sales, headed by The Eklund Gomes Team at Douglas Elliman, are slated to begin in fall 2016. The building is expected to be ready for move-ins by fall 2018.

Eastern Consolidated has been retained to sell a six-story, 17,266 s/f medical office building at 261 East 78th Street on the Upper East Side between Second and Third Avenues.

The asking price is $21,650,000, which is a 3.5 percent cap rate on in-place net operating income.
There are seven floor-through tenants, including the basement, with an average 5.5 years remaining on the existing leases.

Stuart Gross, Executive Managing Director and Principal, was selected by the owner to market the property, and his appointment by the U.S. Bankruptcy Court to oversee the sale is being finalized. Chris Matousek, Director, Financial Services, is the analyst for the deal.

“This property is an ideal 1031 Exchange investment because it offers a buyer the opportunity to acquire a trophy Upper East Side medical office building with secure in-place cash flow and minimal landlord responsibilities,” Gross said.

“This building likewise fits well with a high-quality family office portfolio where long-term and predictable income are more attractive than the value added asset play.”

The medical office building was constructed in 2009 and is fully leased to a mix of primarily medical office tenants at market rate rents that include escalation clauses.

Eastern Consolidated arranged the sale of a package of 128 sponsor-held condominiums in a 280-unit, 29-story, 403,000 s/fcondominium building at 100 West 93rd Street, one block from Central Park on the Upper West Side.

“This was a very hotly sought after condo package that generated a great deal of investor interest,” Ezratty said.
“Condo and co-op portfolios of this kind generally appeal to a core group of niche investors, but this package also attracted broader interest from multifamily investors.”

“A package like this one at 100 West 93rd Street within a newly repositioned high-rise apartment building rarely becomes available in such a desirable residential neighborhood,” Gutoff said.

Built in 1973, 100 West 93rd Street was converted to condominium ownership in 2007 and repositioned with the addition of retail space on the ground floor and lower level, which is leased to Party City and Trader Joe’s; a large new community facility, which is leased to a school; and a private, landscaped roof deck with outdoor seating at the second floor level.

$30M investment to aid Condeco expansion into US