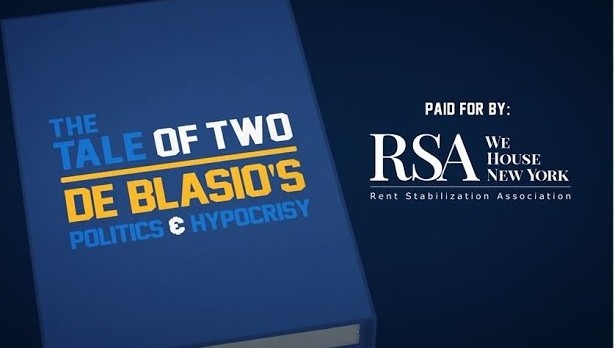 Days after filing a lawsuit to overturn the rent freeze enacted last month and alleging that the Rent Guidelines Board is advancing the political agenda of Mayor Bill de Blasio, the Rent Stabilization Association has launched an advertising campaign to promote their message.

The RSA is the  City’s largest landlord organization with 25,000 members it says  are directly impacted by the second rent freeze in as many years.

The ad campaign portrays de Blasio as the puppet master of the Rent Guidelines Board, an independently appointed group. A hand captioned “de Blasio’s politics” appears on screen controlling a marionette labeled “Rent Guidelines Board,” while the narrator notes that de Blasio claims he’s not pulling their strings even though he appointed all nine members of the board.

The RGB made history again last month when it voted for a second-consecutive rent freeze on 1-year leases of rent-stabilized apartments. A rent freeze mantra was a central element of the Mayor’s election campaign and has continued since he took office in 2014.

“We want everyone to understand that de Blasio and his administration is basing decisions on politics and his political agenda – especially when it comes to affordable housing policy,” said Joseph Strasburg, president of the Rent Stabilization Association, which represents 25,000 owners of the 1 million rent-stabilized apartments in the five boroughs.

“With de Blasio desperate to reverse his plunging approval rating, we expect this politics-over-policy governance to continue – and that’s bad for tenants, neighborhoods and rent-stabilized apartment owners, who are the largest providers of affordable housing in the five boroughs,” Strasburg added.

“It’s politics when de Blasio interferes with a rent guidelines process that by law is supposed to be independent of City Hall influence. It’s hypocrisy when de Blasio freezes the rents for everyone else but raises the rents of his own tenants.”

$30M investment to aid Condeco expansion into US