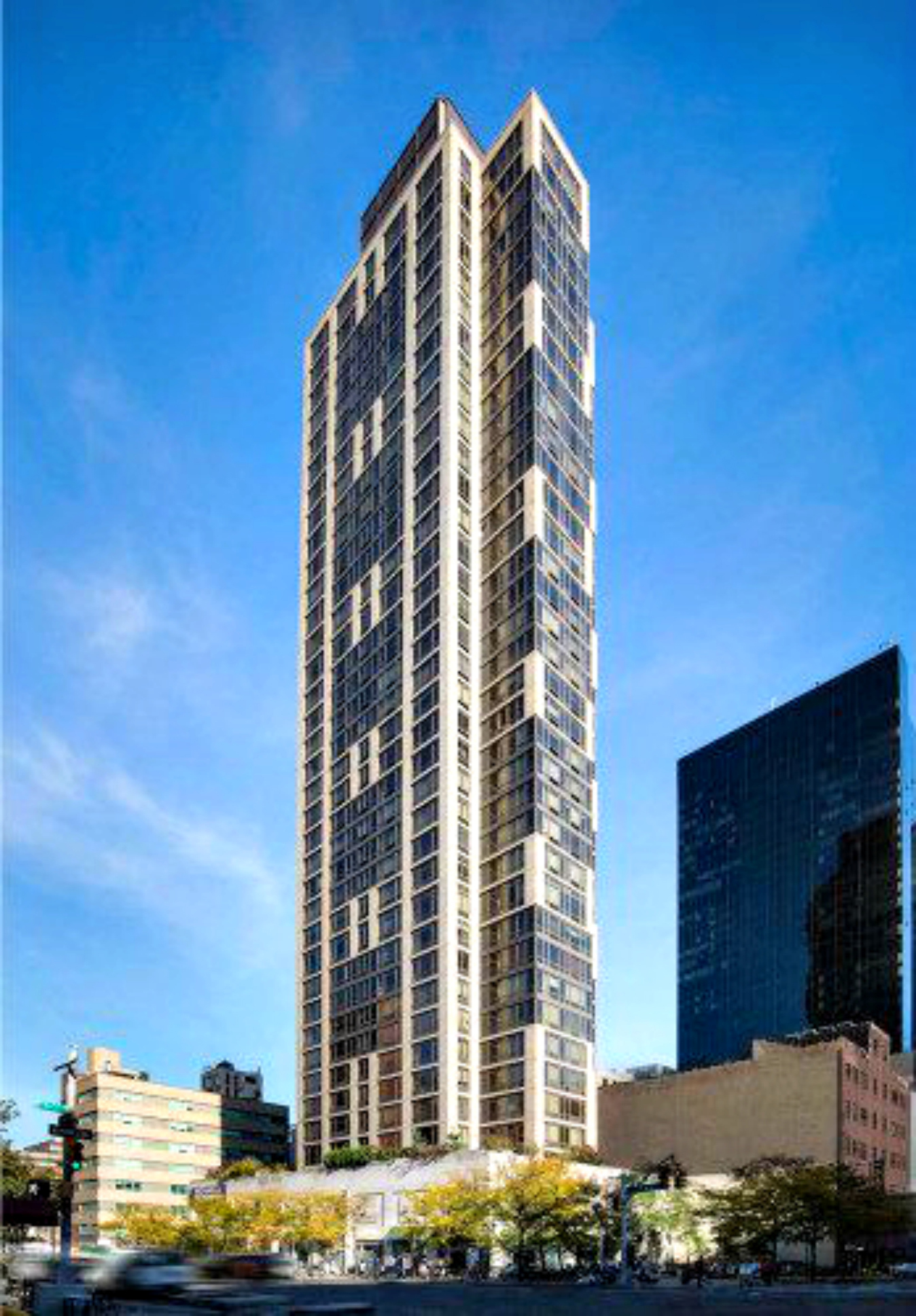 GAIA Real Estate has acquired 90 condo units in a bulk sale for $52.5 million from the original sponsor at Bridge Tower Place, a luxury condo building on the Upper East Side. 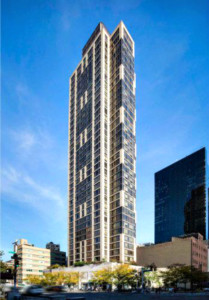 The original sponsor is an affiliate of The Brodsky Organization.
Bridge Tower Place, at 401 East 60th Street, is a 38-story full-service building overlooking the East River.
GAIA has purchased hundreds of bulk condo units in New York City since 2009, although Bridge Tower Place is its first acquisition in New York City in over three years.
Managing partner Danny Fishman said, “We see the strong trend of young professionals moving to urban locales continuing and high-paying employers looking for talent following the same patter. We also see empty nesters selling their big suburban homes and moving to walkable urban areas.”
He said GAIA was drawn to Bridge Tower Place by its “desirable location in a vibrant neighborhood.” Fishman added, “First and Second Avenues on the Upper East Side are undervalued.” explained Fishman.
CBRE represented the seller in the transaction.

● CBRE
Square deal for Jersey ʻglass cubeʼ partners
Mountain Development Corp. and its joint venture partner PCCP, LLC, have sold One Harmon plaza for $34.25 million.
Woodland Park-based Mountain purchased One Harmon Plaza during the down market of 2014 for a bargain $11.5 million.
They “made a significant, multi-million-dollar capital improvement investment” in the glass cubed 192,089 s/f Class A office building that included reconstructing the three-story parking garage and renovating the lobby, as well as the addition of a new conference center, cafeteria and fitness facility.
Over a four-year holding period, the joint venture nearly doubled the building’s occupancy to 95 percent at the time of the sale. 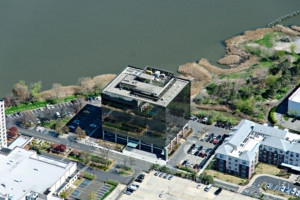 Samuel Bernhaut, vice president of CBRE Advisory and Transaction Services, and Robert L’Abbate, first vice president of CBRE Capital Markets brokered the sale while the firmʼs Debt & Structured Finance team of James F. Gunning and Donna
Falzarano arranged financing for the private buyer.
The sale was further assisted by Nick Savage of CBRE’s financial consulting and brokerage services. CBRE’s office leasing team of Robert Norton and Greg Barkan, as well as Neil Kurtz, Managing Director, Asset Services, and Eva DeForest, Director, were retained early in the sale process as advisors to ZI One Harmon Plaza, LLC in order to facilitate a seamless transition.
“By using the CBRE platform and leveraging relationships, we were able to identify and secure an exceptional, stabilized investment opportunity for our private investor,” said Bernhaut.
“Our team looks forward to assisting the new ownership in building on the momentum created by Mountain

Development and PCCP, LLC to maximize the potential of this one-of-a-kind asset.”

HG Capital, an affiliate of The Hakimian Organization and Gorjian NY, in partnership with Imagine Capital Group and CH Capital Group, has paid $33 million for a Queens development site.
The current plans call for a mixed-use development with retail, parking, and more than 400 residential units. New York based Aufgang Architects has been retained as the architect for the development.
Located at 72-01/72-17 Queens Boulevard in Woodside, the 58,000 s/f lot has 315 ft. of Boulevard frontage and is located
near several subway lines and the Long Island Railroad.
“Woodside has all the components of a terrific residential neighborhood,” said Shawn Hakimian of HG Capital. “Transportation is strong, retail is thriving, and the school system is excellent. We are excited to deliver an outstanding rental building to the area.”
HG Capital LLC was founded in 2017 by principles of The Hakimian Organization and Gorjian NY: Rex Hakimian, Shawn Hakimian, Kevin Gorjian and Jay Hakimian.

Edge Property Group has bought a block-through development site in Washington Heights for $21 million.
The site – which consists of eight lots with frontage on 165th Street, 166th Street and Edgecombe Avenue – has a zoning lot area of 31,576 s/f. The property’s R7-2 zoning allows for around 119,370 buildable square feet as-of-right, with the community facility bonus increasing this tally to 205,244 buildable square feet. 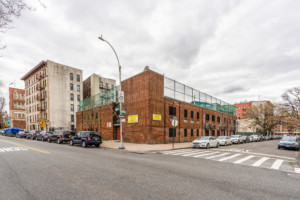 Ariel Property Advisors brokered the sale. Victor Sozio, Shimon Shkury, Michael A. Tortorici, Matthew L. Gillis and David Khukhashvili represented the seller, Sand Realty Group, and procured the buyer.
“The site’s substantial footprint and proximity to neighborhood institutions, such as Columbia Presbyterian, were main drivers in establishing the site’s value,” said Sozio,
Sozio believes the area is poised for an uptick in development activity as investors seek opportunities to deploy capital in emerging markets.
Edge previously developed a successful hotel on 168th Street. No-one was available for comment in the company’s plans for this site by press time.

Rosewood Realty Group announced the $15 million sale of a six-story elevator building with 48 rent stabilized units in Midwood, Brooklyn.
The building, at 2626 Kings Highway in Brooklyn, is located between East 26th and 27th Streets.
The buyer, Ace Management, is a private family investment firm. The 54,700 s/f building sold for 17.8 times the rent roll, with 3.63 percent cap rate. Rosewood’s Michael Guttman and Aaron Jungreis represented both the buyer and the seller, 2626 Kings Highway

Boston-based Davis Companies has sold a 93,916 s/f office building in Montvale, NJ, to Northeast Capital Group for $14 million.
The building at 3 Paragon Drive is home to Pentax Medical, a global R&D and manufacturing firm offering optical technology solutions.
The Davis Companies paid $10.9 million for the property in 2014, according to public records, completed various capital improvements to the property, and secured a long-term lease extension with the anchor tenant
The seller was represented by JLL’s Joseph Garibaldi, Thomas Walsh, Stephen Feinberg and Katelyn Borovsky. “The area in and around Montvale is experiencing positive momentum and Pentax Medical’s business is thriving,” said Garibaldi.

● CUSHMAN & WAKEFIELD
$13M Koreatown retail options
Cushman & Wakefield arranged the sale of 976 Avenue of the Americas, a fully-leased, three-story retail building in Midtown.
The final closing price was $13.25 million. John Ciraulo and Craig Waggner led the marketing efforts on behalf of the seller along with Doug Blankrot and Lou Magarelli. 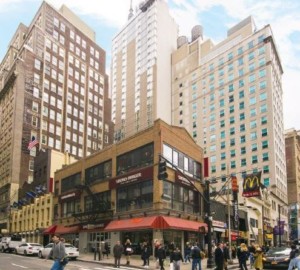 According to Waggner, “With the ability to have the building vacant by virtue of in-place buyouts and early termination notices the purchaser has the flexibility to either occupy the building for their own use or redevelop it and capitalize on an avenue that has very few development opportunities.”
Current tenants include 5 Boro Burger on the ground, a nail salon on the second floor and Red Rocket Tattoo on the third floor.
The property is located in the C6-6/MID (R10 Equivalent) zoning district which allows flexibility for residential, office, hotel, community facility and retail use.

Getting to the real story behind New Yorkʼs affordable housing crisis