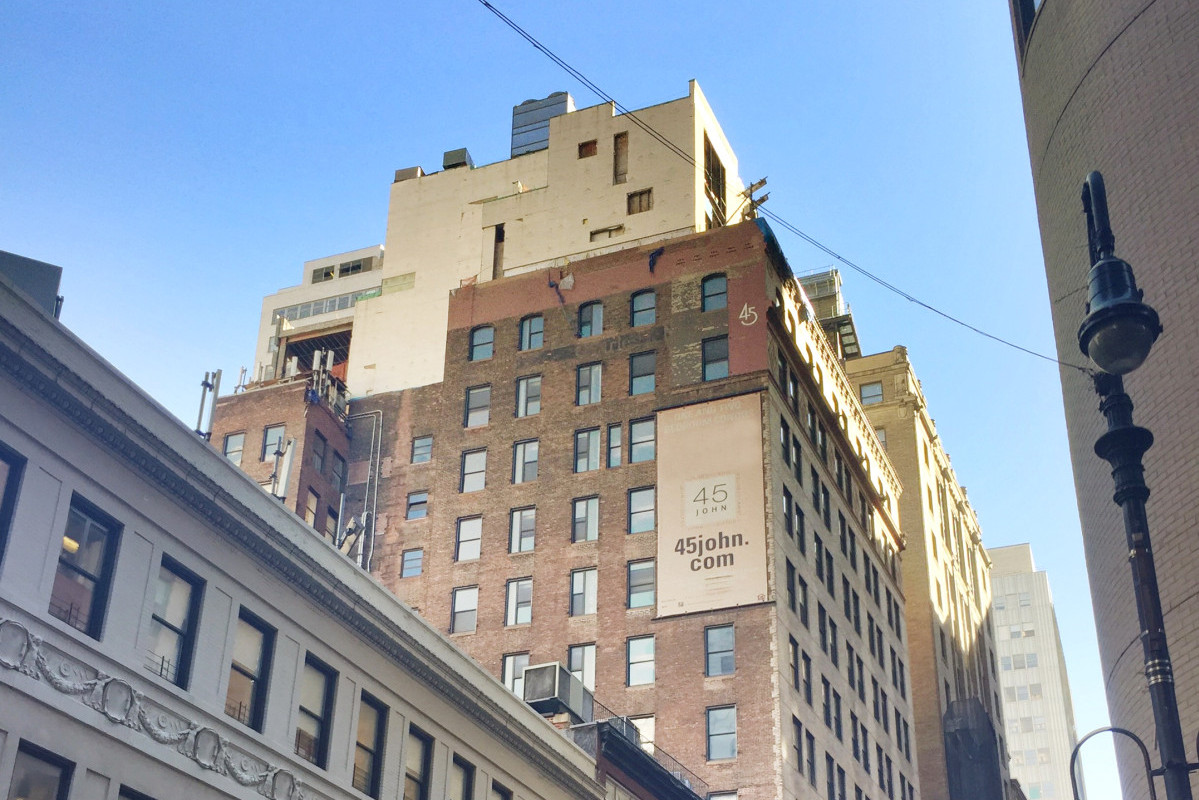 TerraCRG brokered the sale of 10 Nevins in Downtown Brooklyn which comes with approved plans for the development of a mixed-use project with 184 apartments and retail space on the ground floor.

“In a market dominated by rental units, 10 Nevins is positioned to be one of the largest condo projects in Downtown Brooklyn.” said Ofer Cohen, the founder and president of TerraCRG, who led the marketing effort with Melissa Warren and her team.

“By repositioning the approved plans from a rental project to a condominium, the developers are able to capitalize on the tremendous demand for for-sale housing options in the area.”

Institutional and global equity interest has included investments by TF Cornerstone and the acquisition of the Macy’s site by Tishman Speyer. Around the block, Michael Stern’s JDS is planning the tallest residential tower in Brooklyn, at 9 DeKalb Avenue.

Eastern Consolidated has been selected as the exclusive agent to market 45 John Street in the Financial District, a stalled office to residential conversion project that is approximately 75 percent complete.

The fee simple interest in the 14-story, 102,000 s/f property will be auctioned off at the U.S. Bankruptcy Court on December 2 with the minimum bid starting at $73.6 million, and will be delivered free and clear of all liens.

Originally planned as a luxury residential condominium project, construction on 45 John Street stopped in 2009 because of the financial crisis.

“This property is ideal for a developer seeking to become part of the exciting renaissance taking place in Lower Manhattan,” Carillo said.

“In the time since construction first started on this project in 2007, the Financial District has undergone dramatic economic and demographic changes. As a result, nearby condominiums are selling for over $1,500 per square foot with a significant premium for larger units, apartments are renting for $70 per square foot, and retail space is leasing for $150 per square foot and rising rapidly.”

The original condominium declaration for 45 John Street called for 84 residential units, including seven penthouses each with private terraces, and 11 foot ceilings heights.

Black Spruce Management, led by Josh Gotlib, closed on a two-building package in Williamsburg for $39 million.

The company purchased 175 and 192 Spencer from Waterton Associates. The two adjacent buildings were completed in 2008 and consist of 82 one-and-two bedroom apartments with roughly 81,000 s/f.

The properties both benefit from a 25 year 421-A abatement which expires in 2034.

Chicago based Waterton purchased the buildings in 2011 from a Brooklyn-based developer. The buildings were originally built as high end condos, however the developer at the time defaulted on his construction loan with Bank of Smithtown and was forced to go rental.

Black Spruce will keep the building rental while improving the overall common areas and amenities.

Steven Vegh of Westwood Realty Associates was the sole broker in the transaction.

TerraCRG has been retained to exclusively represent ownership in the sale of one mixed-use and three multifamily buildings in Park Slope and Gowanus.

Adam Hess, along with his team, Sam Shalumov, Edward Setton and Kirill Galperin are representing the sellers of the portfolio, valued at over $22 million.

“We have seen insatiable demand in 2015 from local, national and international investors for product like this in Brownstone Brooklyn,” said Hess, noting that tight inventory for housing, condo and co-op pricing in the heart of Park Slope to $1,550 psf and the rental market for renovated units is edging into the $56 psf range.

Holliday Fenoglio Fowler (HFF) has closed the sale of The Crest at Princeton Meadows, a 704-unit, garden-style apartment community in Plainsboro, NJ.

HFF marketed the property on behalf of the seller. A joint venture between Harbor Group International and Azure Partners purchased the asset free and clear of existing debt.

The Crest at Princeton Meadows is 94 percent leased and has 37 two- and three-story residential buildings housing one- and two-bedroom units.

The community, which has undergone significant capital improvements since 2012, has an outdoor pool, tennis courts, volleyball court, putting green and playground.

Situated on 40 acres at 3217 Ravens Crest Drive in the Princeton submarket of Middlesex County, the property is adjacent to the Meadows at Middlesex Golf Course.

Originally developed in 1916, 47-37 Austell Place can be redeveloped for multiple uses including creative office, ground floor retail or event space.

“There was substantial demand for the property as a value-add office redevelopment,” said Julien.  “Due to LIC’s attractive loft warehouse building stock, transit infrastructure and access to Midtown, it is an attractive investment profile.”

Pre-builts prized at One World Trade