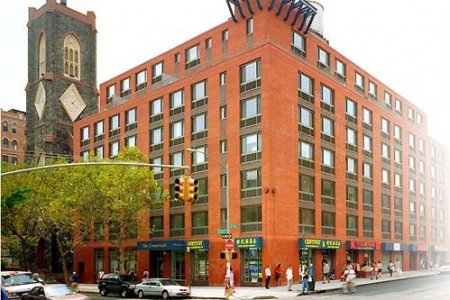 Located at 320-328 Ocean Parkway, 420 Avenue F in Kensington and 2302 85th Street in Gravesend, the buildings were owned by Jeremias Family Partnership (JFP) and had been controlled by the Jeremias family for several decades.

The properties were purchased by the Hertz family, who paid $317,000 per unit for the portfolio.

The deal was co-brokered by GFI Realty’s Erik Yankelovich and Aron Taub and Meridian Capital Group’s Lipa Lieberman, Adam Sprung and Mark Steinmetz, with both firms advising the buyer as well as the seller.

According to Yankelovich. “There were several other buyers who came very close to buying the properties, but each of those deals ultimately unraveled.

“We knew that the Hertz family was looking to acquire institutional-quality assets in Brooklyn, and we were able to convince them that this was the right deal for them to expand their portfolio.”

Added Taub: “Arranging the sale of inheritance holdings is often complicated; therefore we had to be of assistance in ensuring all different inheritors were comfortable with the same disposition strategy. Despite the fact that there were several family members with ownership stakes in this portfolio, we were able to get all the stakeholders to agree to this aggressive offer with a sub-four cap rate.”

The two four-story walk up buildings, which span 41,000 s/f, are situated between Underhill Avenue and Washington Avenue. The unit mix consists of 36 one-bedroom, 11 two-bedroom and two three-bedroom apartments. There are 12,400 s/f of additional air rights.

“Well-maintained multifamily properties of this scale, offering significant upside, rarely come to market in Prospect Heights, so it’s no surprise we received dozens of offers during the marketing campaign,” said Berman.

AY’s Charles Kingsley, Principal and Eric Karmitz, Associate, represented the buyer, SMA Equities in the off market transaction.
The seller, the Silber Estate, owned the property since the 1960’s.

“The Upper East Side remains an attractive market for a variety of commercial real estate sectors in Manhattan,” said Karmitz, Avison Young.

The 1220-24 Lexington Avenue property was first built in 1880 by Joseph Richardson.

K Property Group has partnered with Boston-based Intercontinental Real Estate Corporation on the purchase of 30 and 32 Howard Street, two five-story commercial buildings at the corner of Crosby Street in Soho.

Plans for the properties include a gut renovation to combine them to create 42,000 s/f of luxury full-floor and smaller pre-built offices on the second, third and fourth floors; and a duplex office penthouse with outdoor terrace on the fifth and sixth floors.

“We are thrilled to break into the Manhattan /New York City real estate market with this acquisition,” said Peter Palandjian, chairman & CEO of Intercontinental.

Rod Kritsberg, founder and managing principal of KPG, added, “Everything we’ve planned for the building is in line with the look and feel of the neighborhood. We have something special planned for the office interiors, which will be transformed into high-end, bespoke pre-built suites that are a cut above even the posh standards of the location.”

Currently the U.S. headquarters of fashion icon Rick Owens at 30 Howard Street, Spector Group will be designing the floor plans.

For the interiors, HBA Architecture & Interior Design will create the workspaces with elements that channel high-end hotels.

The available office spaces will range from 3,800 to 7,200 s/f with the potential to create a building-within-a-building, three-floor penthouse.

There will be 4,500 s/f of fully renovated retail space at 32 Howard Street.

Each of the upper level floors, from second to fifth, have 19 windows and high ceilings. When construction is completed, individual floor plates will contain 7,200 s/f and a 170 feet of wraparound window frontage.

They consist of two, five-story mixed-use walk-up buildings and one six-story mixed-use building with a total of 58 apartments and eight retail stores including a barbershop and a grocery. They were built between 1906 and 1908.

Together they sold for 13.12 times the current annual rent roll and at a four percent cap rate.

Rosewood Realty’s Aaron Jungreis represented both the seller and the buyer, a private investor.

The 97-percent-leased community has a clubhouse, fitness center, business center, swimming pool and parking. It is located in an affluent suburb 15 minutes from Center City Philadelphia.

“We were very encouraged by the activity on this transaction,” added Thomson. “Despite the smaller property size of 170 units, the market showed a strong interest from both institutional and private groups.”

The purchase is the first in the New Jersey market for San Francisco-based Friedkin.