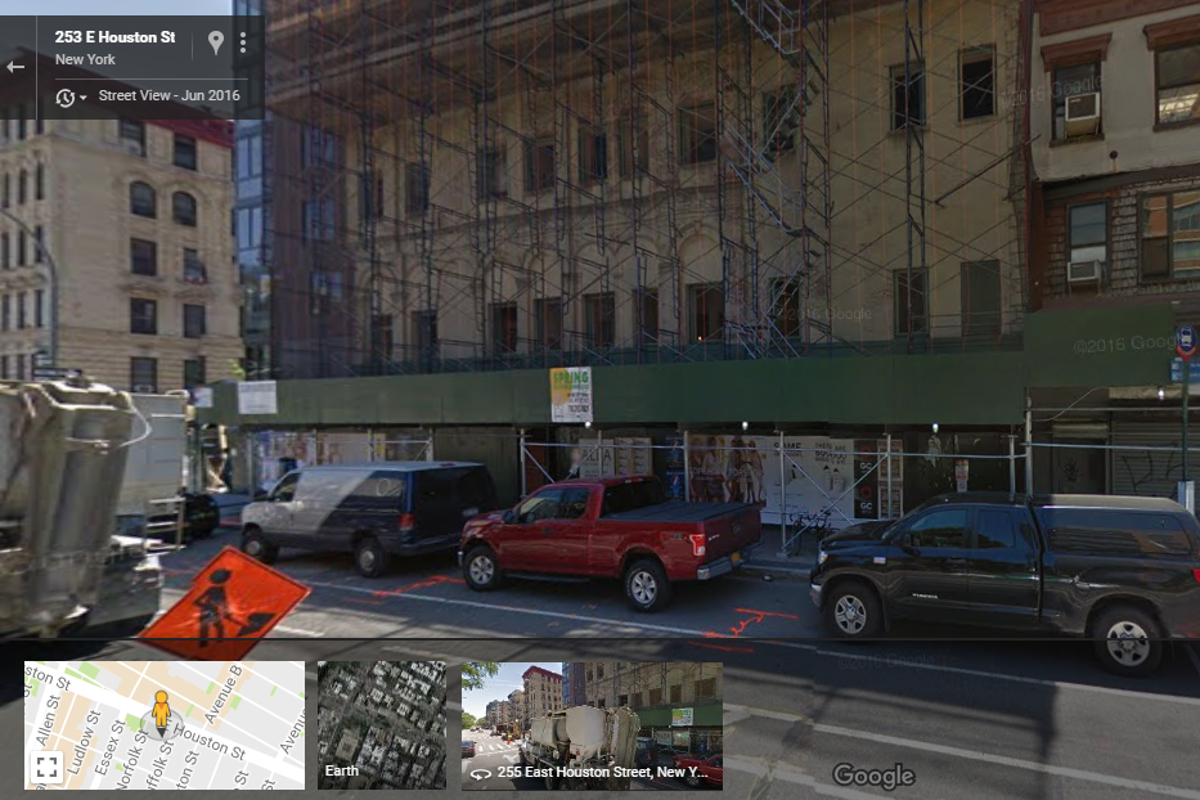 Lower East Side landlord Samy Mahfar is alleging unfair treatment in the denial of his spot rezoning application at 255 East Houston Street in the Lower East Side, pointing to the involvement of a community board member with a supposed conflict of interest.

Earlier this year, Mahfar and his firm SMA Equities applied for zoning changes to a portion of East Houston Street that covers two and a half blocks. The proposal, which aimed to add a commercial overlay to a residential area, would have allowed Mahfar to sign a restaurant or retail tenant on the ground floor.

Under the area’s zoning specifications, the space can only be taken by a community facility. The previous tenant in the space was day care center Action for Progress.

Mahfar was planning to build a 13-story rental building with 18 units of affordable housing. Due to opposition from the City Council and the community board, he withdrew his application in September.

Mahfar said that his proposal was partly compromised due to the involvement of Enrique Cruz, a member of the Land Use, Zoning, Public and Private Housing Committee of Community Board 3. Cruz was one of the developers of 265 East Houston Street, which was the site of a construction accident that compromised the foundation of Mahfar’s building next door. In a 2010 report in the New York Times, Cruz said that construction workers were digging 130 holes on the 265 East Houston Street site when sensors picked up vibrations in the neighboring lot. Inspectors found cracks in 255 East Houston Street that “compromised the structural integrity” of the building.

The possible conflict of interest lies in the fact that during its public hearings, the community board depicted Mahfar as a “bad actor” in the neighborhood. To illustrate its point, the group blamed Mahfar for displacing the day care center. According to The Lo-Down, the board wrote in a May resolution that “the daycare (center) was forced to be vacated due to the open violations and the applicant’s failure to address them.” This allegation also reappeared during deliberations by the Department of City Planning and the City Council. Cruz did not mention his involvement in the accident that damaged the day care center.

Cruz declined to comment to REW. He asked that all questions be directed towards the Conflicts and Interest Board, which “vetted and approved” his participation.

“The fact that Enrique Cruz was allowed to testify at the City Council hearing as a member of CB3 without disclosing his role as the developer of the adjacent property whose excavation damaged my retaining wall and actually necessitated the new development was very disturbing,” Mahfar said.

“This is the guy who cracked the building and he’s slandering me. I’m not a litigious guy. Usually, we’d rather just stay quiet and stick to our business. But this, this is just lies. At some point, you just can’t take it anymore.”

At every stage of the zoning proposal, Cruz was one of Mahfar’s fiercest critics. According to Bedford + Bowery, during a meeting of the CB3’s zoning committee, Cruz told lawyer Nick Hockens: “Your client refused to repair what was left to repair because he preferred to use that to get out of his long-term lease with the facility owner, and now he asks you to come here to ask us to give you a variance for special permits?”

Meanwhile, during a City Council hearing, Cruz said: “What this gentleman is trying to do is get $150 per s/f. That’s the bottom line. He wants the community to pay for it by foregoing a community facility.”

It seems some of the officials involved in assessing the plan had either forgotten Cruz’s involvement or were unaware of it. When asked whether Cruz should have excused himself from the proceedings, Rosie Mendez, a City Council Member who opposed the rezoning said: “He’s a community board member. If he has a conflict, he’s supposed to disclose it. It should be disclosed. Even if you don’t have a conflict, you should disclose something if there’s going to be an appearance of a conflict. He is a community board member and he did come to City Hall. If there’s a belief that there’s a conflict with Mr. Cruz testifying, he (Mahfar) should report that to the conflict of interest board. Nothing was ever raised with me about that.”

When told of Cruz’s role in the construction accident, Mendez added: “I totally forgot about that. That is something that should have been on the record.”

Nonetheless, Mendez said that opposition to the plan was not all based on Mahfar’s reputation. “He was asking for a specific spot rezoning. When I first met with him, I said, ‘Look, this was something that was deliberately done this way.’ I don’t know that the community will change their mind. Community wanted to keep it as it is,” she said.

The allegations of displacing the day care center were likely aided by Mahfar’s reputation. He has been accused of illegal construction and tenant harassment in his buildings. A group of  tenants at 210 Rivington – a building Mahar sold over a year ago –  once formed an organization against him.

“The Mahfar Tenants’ Alliance is saddened to see that SMA Equities (i.e. Samy Mahfar), which has severely disrupted our lives, has once again tried to cloak their activities as “improvements,” the group wrote in an op-ep published in Bowery Boogie.

“We believe that they have denied leases to long-term tenants, disrupted basic services at unheard of levels, exposed some tenants to potentially toxic lead dust, and broken regulation after regulation. There was never a tenants’ alliance needed in the days before SMA Equities – none of us particularly wants to spend our time in this fight for our health, safety, and homes. We only created this alliance because of the large decline in our quality of life.”

Mahfar dismissed news stories about him as “allegations.” “I can show you facts,” he said. He claims that the accident at 265 East Houston has denied him the $650,000 a year in rent that the day care center was paying. Over the past six years, that amounts to a loss of $3.9 million.

He also said that he volunteered to provide a binding agreement that would prevent him from taking a bar as a retail tenant. Mendez confirmed this claim. That offer addressed another point of opposition for the community board. The group was concerned that another bar was going to open in the neighborhood.

“I offered a binding agreement that I’m not going to put a bar before they even asked,” he said.

Nonetheless, Mahfar is convinced that officials opposed his project because it played well politically. Mendez denies this.

“I, by myself, politically, could not stop something if I don’t like someone. First of all, that’s not the way I do business,” she said.

“He (Mahfar) does not enjoy a good reputation in the community particularly with tenants. I have had many complaints. My colleague, Margaret Chin, has had many more complaints about him, his buildings and the way he does work. But that has nothing to do with rezoning.”

REW TV asks ICSC: What do you expect from retail real estate in 2017?