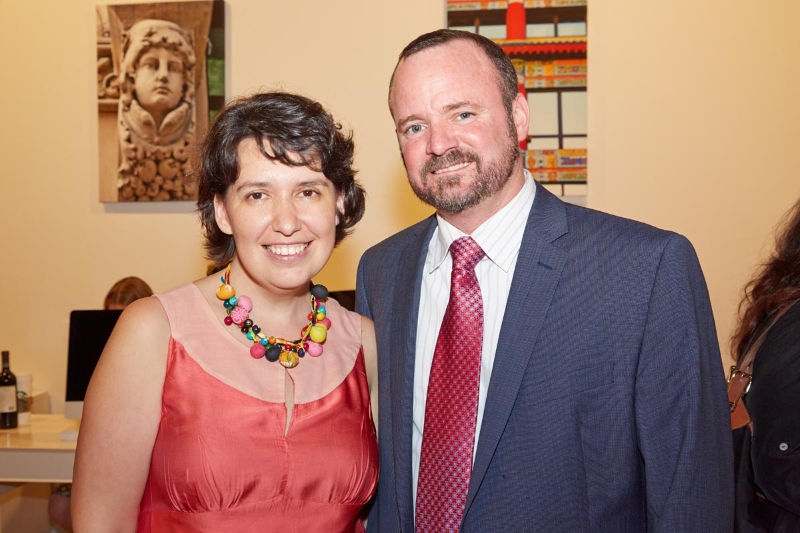 Russian expat wants to get to know neighbors

Many New York brokers made it into real estate by chance or changing personal fortunes. For Karina Sagiev, it took nothing less than the collapse of an empire.
Born in 1973, Sagiev grew up in Soviet Moscow — 8,000 miles and a world apart from the shiny heights of Manhattan real estate. In the capital of fixed prices, (legal) entrepreneurship was an impossibility and brokers about as common as palm trees.

“It changed my life completely,” recalled the founder of Evans Real Estate Investments. “As a teenager, when things change for the better, it’s so hopeful and exhilarating. I felt that my future was in my hands and would be wonderful.”

Sagiev first felt the whiff of opportunity at university, where she went in 1991 to study a subject that hadn’t existed under the old order: Jewish history.

Although technically equal to the Soviet Union’s many other official nationalities, Jews had been faced with state-sanctioned discrimination since World War II. “I knew that I was different, and not necessarily in a good way,” said Sagiev, who grew up in an assimilated Jewish household.

Sagiev said it was this official categorization that made her aware of her Jewish identity and led her to explore it at university. She studied Jewish history at Moscow’s Russian State University for the Humanities in a pioneering program run with the help of New York’s Jewish Theological Seminary, and spent a semester in Israel.

More importantly for her subsequent career, the changing economic tide in Moscow allowed her to take a part-time job. In 1994, she responded to a job ad and started working as an apartment broker for foreigners.

Foreign employees of the many Western companies flocking into Moscow needed help finding apartments that suited their tastes. Sagiev matched landlords and tenants, putting her English language skills to use.

One of the foreigners Sagiev came in contact with was Brian Zippin, a U.S. citizen who had also jumped into Moscow’s new residential business. He specialized in making foreigners feel at home, tearing down wallpapers and importing furniture from abroad. “There was an entire industry that refurbished these apartments according to western styles,” she recalled. “It became very lucrative.”

When Zippin started his own brokerage in 1995, he asked Sagiev to join him. She became a founding member of Evans Property Services. Two years later, when Zippin returned to the U.S., Sagiev bought out his shares and became a partner.

Her business began to expand from foreign to domestic clients. “Evans quickly became one of the top companies in luxury real estate,” said Sagiev. “The industry was only a few years old, and I was shaping it.”

“Those were the best ten or 15 years (Russia) had in the 20th century. Unfortunately, it lasted only so long, and things are now going in a different direction.”

Sagiev began to see things changing for the worse during the financial crisis of 1998, which hit Russia hard. “The level of corruption and stress heightened. Crime on the streets was merging with crime of law enforcement. That was one of the reasons why I didn’t want to do business in Russia any more,” Sagiev explained.

In the spring of 1999, she moved to the U.S. to study for a Masters degree in International Management at the University of Pennsylvania’s Lauder Institute. She paid for her studies in part by selling a Moscow apartment she had inherited from her grandmother.

In 2002, Sagiev returned to Moscow, but became increasingly worried about the country’s authoritarian turn under new President Vladimir Putin.
One of the decisive events that eventually led her to leave Russia for good occurred in late October 2002.

While a musical show was playing at Moscow’s Dubrovka theater, 40 to 50 Chechen separatists stormed the building and took more than several hundred people hostage. After a three-day standoff, the Russian security services decided to end the crisis by gassing the entire theatre.

All of the hostage takers and around 130 hostages died from the gas — among them, the 16-year-old daughter of a notary Sagiev worked with. The son of one of Sagiev’s agents survived by climbing out of a window.

“The horrible event was the result of a political system that doesn’t value human life. I just didn’t see myself having a future under such a system,” said Sagiev.

In 2006, she moved to the U.S. once again, initially on a tourist visa. “I had gained the chutzpah to enter the most successful and saturated real-estate market, and thought that New York could live with another broker,” she said.

A year later, she founded Evans in New York. Initially, she hoped to replicate her successful model from Moscow, offering her services to foreigners moving to New York. But she quickly learned that foreigners were more interested in New York apartments as investments and pied-a-terres.

Sagiev said most of Evans Real Estate Investments’ clients are from Western Europe — despite her Russian connection. She attributes much of her success to her multilingual website, which is available in seven different languages. “I was amazed that most of our clients got attracted to us because of our website. Even if they speak English, they are much more comfortable working in their own language.”

One of the more notable sales Evans has brokered is a $20 million apartment at the new luxury tower One57, where the brokerage represented a Russian buyer. Currently, Evans has a client in contract for a space at 15 Central Park West for slightly over $7 million.

Sagiev lives in Lincoln Square with her husband, the architect Dennis Sagiev of Robert A. M. Stern Architects, and her four-year-old daughter. She says she feels at home in New York, although she still follows news from Russia closely.

So far, she has had few native New Yorkers as clients, but Sagiev is working to change that. She recently opened a storefront office in Lincoln Square and hopes this will attract more business from locals. “I want to win the trust of my neighborhood,” she said