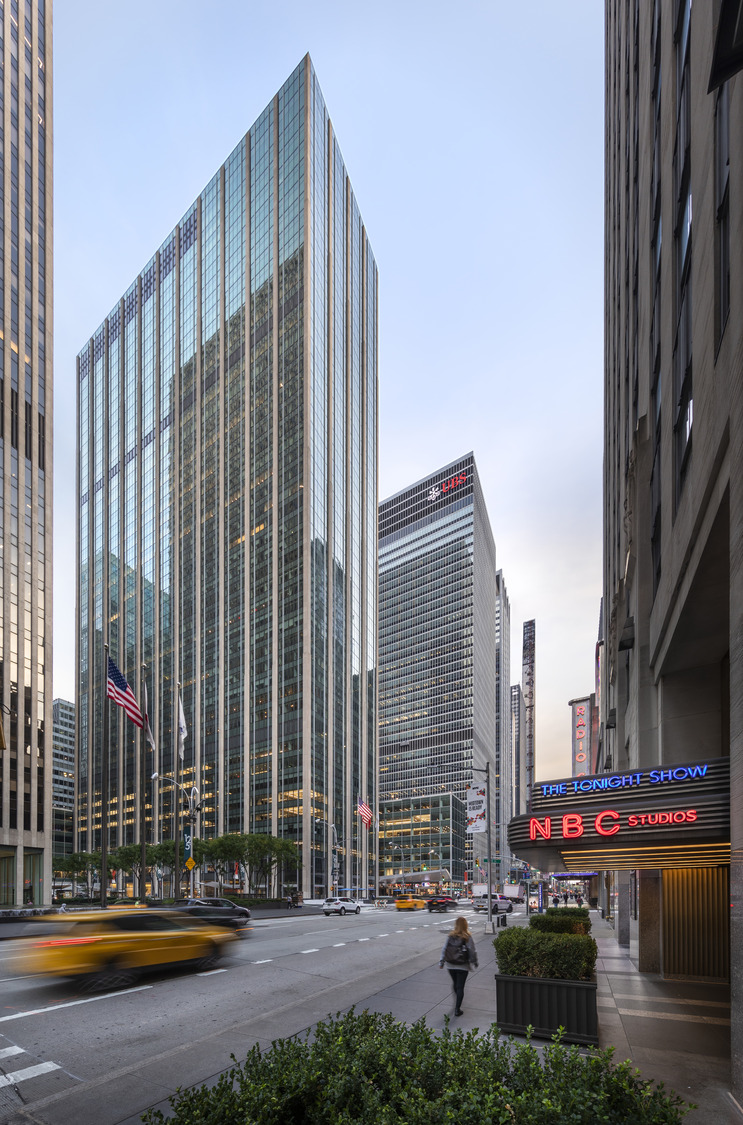 Rockefeller Group announced that law firm Latham & Watkins LLP has leased an additional half floor at 1271 Avenue of the Americas, bringing the office space in the building to 100 percent leased after completion of a $600 million redevelopment project.

The law firm is the largest tenant in the 2.1 million square foot building, now occupying more than 435,000 square feet.

First completed in 1959, 1271 was the first building developed in the expansion of Rockefeller Center to the west side of Sixth Avenue.  The 48-story building, at 50th Street opposite Radio City Music Hall, was originally owned in partnership with Time Inc., its anchor tenant for nearly 60 years.

Located on the Avenue of the Americas between Bryant Park and Central Park, in recent years it has consistently been among the most active in Manhattan for the city’s largest office leases.  It was also popularly known as home to the fictitious advertising agency Sterling Cooper Draper Price in AMC’s Mad Men television series.

In addition to Latham & Watkins, over the past five years Rockefeller Group has secured five additional long-term leases at 1271 with tenants of more than 100,000 s/f, including AIG, Major League Baseball, Mizuho Americas, Bessemer Trust and Blank Rome.  Other tenants include H.I.G Capital, Greenhill & Co. and Rockefeller Group.

“This has been an extraordinary project, from start to finish, benefiting from an original design that was ahead of its time in a central location on the Avenue of the Americas that is very hard to compete with,” said Bill Edwards, Rockefeller Group’s executive vice president of Core Holdings.  “We appreciate the effort of our entire project team and we couldn’t be more pleased with the outstanding tenant roster led by strong global firms like Latham & Watkins.”

Latham & Watkins was represented by Scott Gamber and Craig Reicher of CBRE.  Building ownership was represented by a CBRE team including Mary Ann Tighe, Howard Fiddle, John Maher and Evan Haskell, in coordination with Rockefeller Group’s Jennifer Stein.  The CBRE team was selected in 2014 and has been involved in more than 1.9 million square feet of leases since 2016.

“New York has been a major strategic priority and growth opportunity for Latham, and we are proud of our accomplishments and track record in this important market for more than 35 years. Our new office at 1271 Avenue of the Americas is incredible and emblematic of the firm’s hallmark values of collaboration and connection. This is an exciting milestone in our history in New York and we are laser-focused on the opportunities to continue to grow and build on our success,” said Marc Jaffe, Office Managing Partner of Latham & Watkins in New York.

“This project represented an extremely rare opportunity to bring an exceptional building to the market for the first time in essentially six decades,” said CBRE’s Maher.  “It’s iconic, it’s centrally located and surrounded by amenities, and with Rockefeller Group’s reinvestment, it became a building of choice for some of the city’s leading firms.  With all its history, it’s best days are ahead.”

Designed by Harrison & Abramovitz & Harris, the original architects for all of Rockefeller Center, 1271 was built by George A. Fuller Company, which was known for its construction of many other prominent New York buildings including the U.N. headquarters, Lever House and the Seagram Building.  The redevelopment of 1271, completed in 2020, was designed by Pei Cobb Freed & Partners and built by Turner Construction.

The redevelopment included replacement of more than 400,000 s/f of glass curtain wall, new building systems, and restoration of the building’s landmarked lobby.  Outside, the distinctive pavement, featuring alternating grey and white patterns inspired by Roberto Burle Marx’s design for Rio de Janeiro’s Copacabana Beach, were replaced and expanded to the street.  Two retail spaces were removed to enhance natural light in the lobby, and new fountains were added to the streetscape along Sixth Avenue for public seating.  In 2020, the building became one of the largest Class-A office buildings in Manhattan to achieve LEED Gold certification for energy efficiency.

In-building amenities include established restaurants including Capital Grille and Ted’s Montana Grill, a newly-built bike room for more than 200 bicycles, Citi Bike stations at the 51st Street entrance, as well as direct access to the Rockefeller Center concourse and four subway lines.

Last August, Rockefeller Group completed the largest new restaurant lease in Manhattan for 2020, a 16,500 s/f lease to Avra Estiatorio at the base of the building along Sixth Avenue.  The popular Greek restaurant plans to open in early 2022.