Priscilla Almodovar is settling into life at the upper tier of one of the world’s top financial institutions. Almodovar, who was promoted as the co-head of real estate lending at JPMorgan Chase in May, has been on a whirlwind tour of her expanded domain.

“My partner (commercial lending expert Chad Tredway) and I just finished a visiting tour. We went across the country. Right out of the gate, we met all of our bankers. We visited six different cities over the last two weeks,” she said.

Almodovar, who was previously JPMorgan’s head of community development banking, has diversified from leading the organization’s affordable housing funding arm. 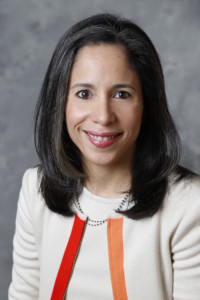 Like many people involved in real estate, she spends most of her working day preoccupied with one question.

“I would say the one thing that we’re spending a lot of time talking about these days, if you’re in real estate, is the whole question of “Where are we in the real estate cycle?” she said.

To find an answer, Almodovar has had to undergo a re-education of sorts. “One of the things that I’ve been looking at in my new role, is understanding market risks, which is very different in asset classes than it is in affordable housing. I’ve been spending a lot of time understanding where the risks are,” she said.

Almodovar, a Sunset Park native who moved to Manhattan in 1987, has shuffled between the private and public sector during her career.

Before joining JPMorgan Chase in 2010, she served as the head of the New York State Housing Finance Agency and the State of New York Mortgage Agency during the Eliot Spitzer administration. She also worked on Spitzer’s campaign, handling issues relating to housing and health care. Prior to that, she worked for law firm White & Case for 14 years, specializing in capital markets.

Almodovar said that her time in government has given her lessons in being a top executive at one of the largest corporations in the world.

“I loved my time in public service,” she said. “There are key things that I’ve learned working in government. One, it is so important to understand who the stakeholders are in everything you do. In government, there are different stakeholders. It’s the same thing in the private sector. It’s really critical. Number two, I learned the importance of partnership. No one can be effective alone. It’s all about bringing your partners across the firm, and external partners, and working together. In my case now, my job is to bring all the partners across JPMorgan Chase, it’s a huge platform,” she said.

However, one of the lessons that she considers critical to her advancement has nothing to do with deal-making at all.
“I’ve learned that celebrating wins and celebrating successes increases like esprit de corp. Everyone gets behind the mission,” she said.

“Everyone loves success. Everyone wants to be part of success. This is one thing I learned from government. I did it then and I do it now. I love to celebrate wins.”